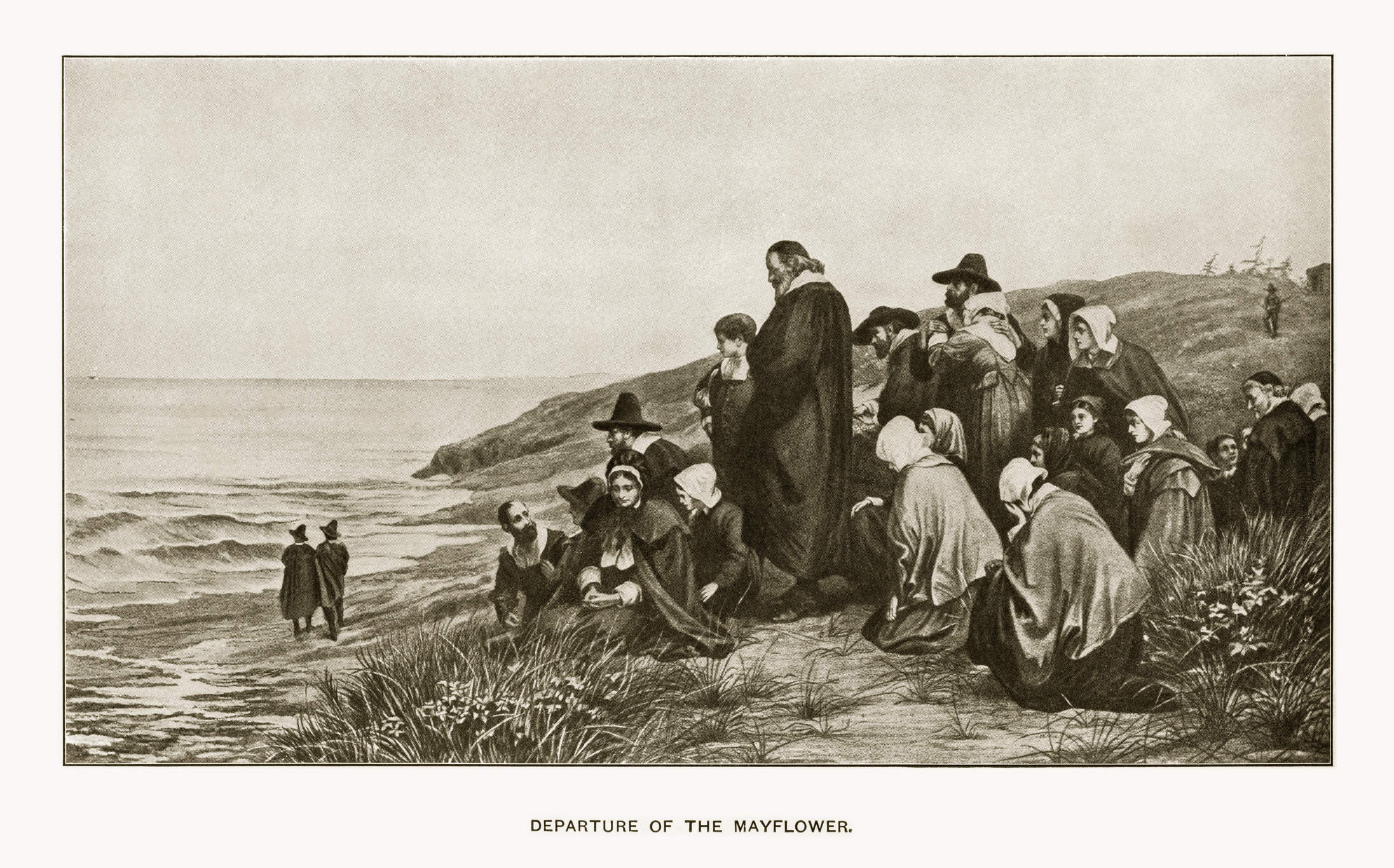 Thanksgiving, for most people here in America, is something of a precursor of Christmas that initiates a deluge of holiday hits playing ad nauseum in public and private locales until sugar plum fairies dance in your worst nightmares. It is a day when family and friends gather together across a table laden with various delicacies, erroneously claimed to be eaten by Pilgrims and Indians, trying their best to avoid ever-controversial politics and religion topics that just might start a mega food-fight and cause Aunt Emma and Uncle Joe, from opposite branches of the family tree, to carve up each other instead of the turkey. It is a day to yell irrationally at a TV screen showing colossal characters ramming into each other over an oval shaped ball, and observe a parade of colorful creatures and creations floating forth from the wacky world of Macy’s.

But aside from all this fanfare (often requiring survival gear… grab your egg-beaters for protection, mates!), the purpose of the festive occasion is for us to take time to be thankful for our blessings and hopefully help those in need of assistance, as we all do from time to time in life. This is a hand-me-down from the harvest festivals across the globe, which celebrate a time of abundance before the coming in of winter. Gratitude for successful crops has been a major facet of almost all religious traditions, and in Europe, earlier pagan folk festivals were Christianized, and the harvest became a special time for thanking God, not just for the food, but for everything we have and everything that happens to us in our lives.

There is a deep philosophy behind this that some might scoff at, failing to detect the visible workings of the Divine in their lives. But, as Christians, we believe that all things fall under His control, including the existence of order in the universe and the way in which destiny plays out. The end results are all a part of His plan, for He is the one who provided the ingredients that gave rise to the result. God is the “Prime Mover”, setting the chain reaction of natural and human history into motion, giving each of us the ability to choose right and wrong, and, in the end, having the hope that all things will be worked to good in the end. As such, we truly do have cause to be thankful to God, in our joys and our sorrows, no matter what our circumstances may be, for all things, and most poignantly, for our salvation through Jesus Christ, whose presence in this world brought the salvation of our souls to fruition.

These adjoining concepts of hope and providence are also brought to the fore in J.R.R. Tolkien’s The Lord of the Rings. “Fundamentally religious works” according to the author himself, an unspoken force is constantly playing a part in Middle Earth, working through the virtues and vices of the characters to bring about the unexpected conclusions found in the story lines. Darkness seems impenetrable at times, but the characters cling to hope – not futility, but the theological virtue of hope – with a keen awareness that this world is only a testing ground to prepare for a higher plain. Tolkien rebuked hopeless cynicism in a world of haughty cynics, and that is what has made his writings so timeless. He believed that human beings were more than electric meat or a conglomeration of scientific microcosms.

As such, we are all called to embark on adventures, journeys, and pilgrimages, drawing us out of our comfort zones, just like the hobbits in Middle Earth. We have to step away from our securities and go somewhere else to reevaluate our priorities and discover what kind of life we want to lead. In turn, this engenders a renewed sense of gratitude for both the old and the new, opening oneself up to a fresh experience of the world and its many blessings. Spiritually, such a pilgrimage may take us along an arduous path, facing “mist and shadow, cloud and shade”, but it will transform us from within. Enter the Pilgrims, the ultimate religious and cultural “bridge” between Old England and Young America who exemplified the rigors and triumphs of a pilgrimage across the sea.

Many times, historians have brought up the query just why the arrival of the Scrooby Separatists at the cranberry bogs of Massachusetts should elicit such a general hub-bub. After all, the Jamestown colonists weren’t the first ones to plant the Union Jack on American soil, the Spanish and the French certainly beat them to the punch by many centuries, and the Pilgrims were only one among many groups seeking religious toleration for themselves in America. Admittedly, I am rather put out that the Catholic English refugees who fled to Lord Baltimore’s fair and pleasant colony don’t get better promo!

But the reason the Jamestown adventurers failed to capture the public imagination as successfully was because their primary goal for being there was to “get rich quick”, plain and simple. The French and Spanish were just a little too different from our own Anglicized culture to feel completely “part of us.” And the fact still remains that the Pilgrims we all know and love were the first major group of ordinary Englishmen and Englishwomen to make the miserable Atlantic crossing to the New World for religious reasons. And in the end, in spite of all the technicalities and nay-saying, they really deserve to be remembered, both in their native land and their adopted home for their tenacity, endurance, and resolve to hold firm to their believes, come wind or weather.

The Pilgrims themselves were a fascinating, and oft times paradoxical, bunch. While they certainly could be austerely pious at times, irrationally prejudiced against Catholics, and not much into having shin-digs on holy days, when they set their mind to partying, records reveal they really “set the house on fire” – sometimes literally! The first “Thanksgiving” of abundance was one such bash, presumably full of celebratory enjoyment after surviving a hellish winter and acclimating to the unknown with the life-saving aid of Squanto, a native who, ironically, had been educated, catechized, and baptized by Catholic Franciscans from Spain!

The Pilgrims were not cardboard cut-outs, but real people with unique and powerful personalities. In keeping with this, they didn’t perpetually tromp around clad in black funeral garb as the greeting cards would have us believe. More interesting records from the period reveal that some of them were quite “decked out” in seriously crazy colors and fashions that conjure up images of the ’60’s as opposed to the 1600s! Unlike the Quakers, they weren’t shy about fighting and sometimes teamed up with one Native tribe against another for their own benefit. Their actions were not always as clean as the driven snow, but their obvious dedication to their faith in spite of persecution and courage in the face of the unknown cannot help but be a testimony to the endurance of the human spirit.

Not only did they establish a successful colony on the edge of nowhere, but they also brought “The Mayflower Compact” into being, serving as a landmark of democratic development, which acknowledged the power of God, the power of the king, and the power of the people. Their emphasis on the written word, entrenched in them not least because of their focus on the importance of reading the Bible, made this possible. It would go on to have earth-shattering repercussions by inspiring other documents in favor of self-government by the people under God, including the founding documents of the fledgling United States of America.

The Pilgrims’ journey to the New World truly lent life to the allegory Pilgrim’s Progress by the Puritan author, John Bunyan, who also had a larger-than-life personality and sense of humor that debunks the notion that all those of his sect were dour fuddy-duds. Indeed, his delightfully whimsical rhyming “Apology” in the intro to his book never ceases to bring a goofy grin to my face at the realization that the humor is still as good as ever over three centuries later. Bunyan was imprisoned in England for his nonconformity to the Anglican Church, so he would understand the plight of the Pilgrims well. In his spirited defense before the court, he advocated for religious liberty and freedom of conscious, not just for his fellow Puritans, but also for all others, even the severely persecuted English Catholics. Also, like Tolkien, he understood the power of imaginative literature that takes on an interior pilgrimage, and it was a dream in prison that inspired him to pen his all-time Christian classic.

I think the following spirited hymn by Bunyan sums up his spirit, along with that of Tolkien, the Pilgrims, and Thanksgiving itself, and should serve as an inspiration to make this holiday season the start of our own inner pilgrimages as we await for the coming of the Christ Child in Christmas. It will surely be the greatest adventure ever known:

Who would true valour see,
Let him come hither;
One here will constant be,
Come wind, come weather
There’s no discouragement
Shall make him once relent
His first avowed intent
To be a pilgrim.
Whoso beset him round
With dismal stories
Do but themselves confound;
His strength the more is.
No lion can him fright,
He’ll with a giant fight,
He will have a right
To be a pilgrim.
Hobgoblin nor foul fiend
Can daunt his spirit,
He knows he at the end
Shall life inherit.
Then fancies fly away,
He’ll fear not what men say,
He’ll labor night and day
To be a pilgrim.