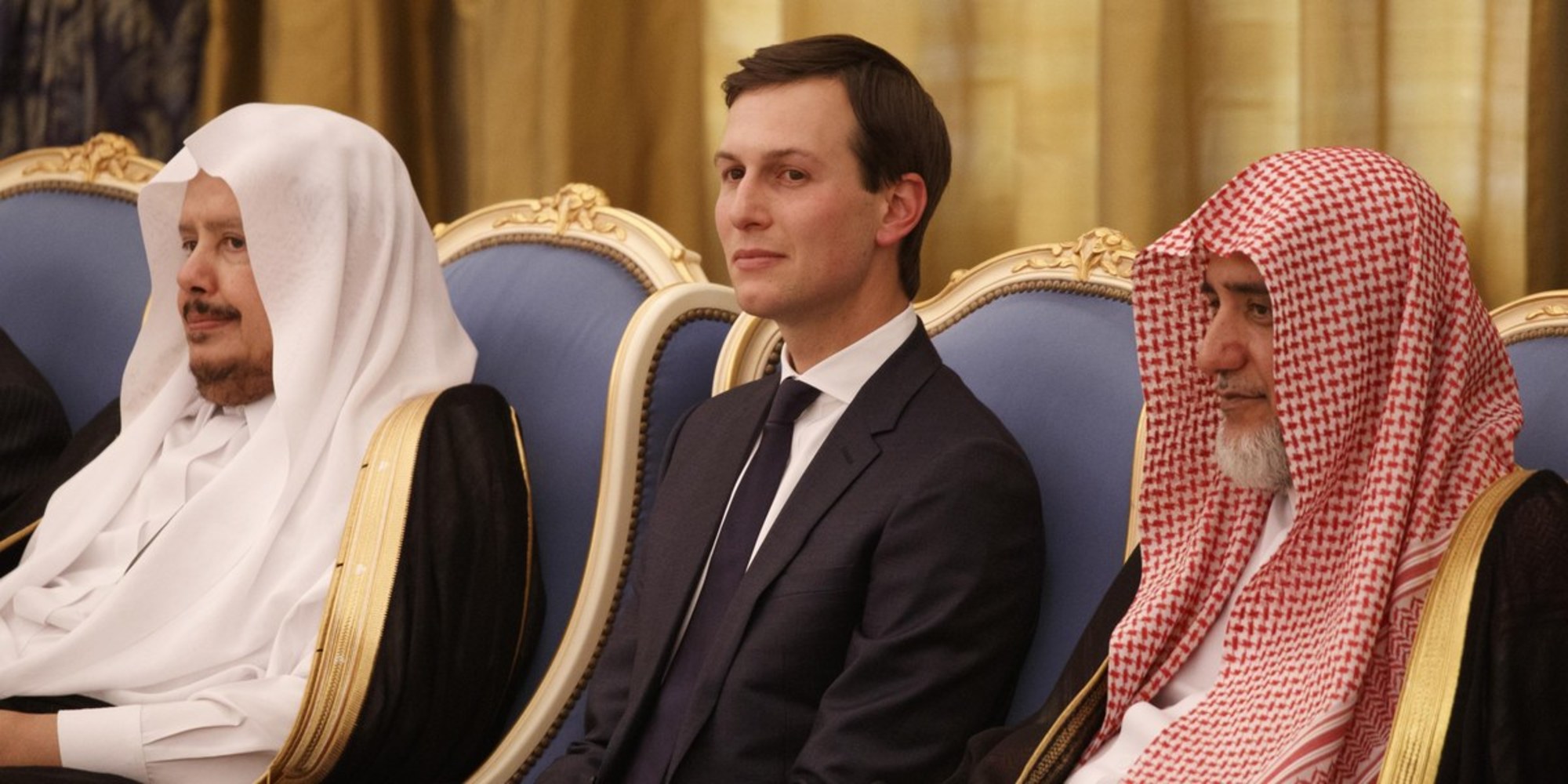 As reported in the NY Times last week, on the afternoon of May 1, Jared Kushner welcomed a high-level delegation of Saudis to to the White House, saying to them, “Let’s get this done today.” Mr. Kushner was referring to a $100 billion-plus arms deal that the administration hoped to close with Saudi Arabia in time to announce it during Mr. Drumpf’s visit this weekend.

The two sides discussed planes, ships,  precision-guided bombs, and a radar system to defend against ballistic missiles.  Sensing that the cost of this last item might be a problem, Mr. Kushner picked up the phone and called the chief executive of Lockheed Martin, which makes the radar system, and asked her whether she could cut the price. Ms. Hewson reportedly told him she would look into it.

Saudi Arabia is a country with a terrible human rights record which Human Rights Watch accuses of violations of international law and possible war crimes in Yemen, where it has been leading a nine-nation strike against the Houthis, including the use of internationally banned cluster munitions. What would Jewish tradition advise Mr. Kushner, avowedly an Orthodox Jew, about helping to arrange weapons sales to Saudi Arabia?

Though admitting their use is sometimes necessary, the Jewish tradition is not fond of weapons. Swords were forbidden for use in hewing the stones for the altar since they had shed blood; King David, the greatest Jewish warrior of all time, was similarly forbidden from building the Temple due to his hands being bloody; the sages of the Talmud forbade wearing a sword in the Temple.  In the Mishnah, the Sages banned bearing weapons in public on Shabbat, even as an ornament, since “they are merely shameful.” Hunting is similarly frowned on (kosher law makes it almost impossible to eat wild game) and Rabbi Yechezkel Landau ruled, in a celebrated Rabbinic response, that killing animals for fun was not Jewish.

As Shlomo Brody writes, legal perspectives on the question of selling weapons evolved in the course of the Talmudic period and, in later centuries, with Jewish law ultimately concluding, with significant hesitation, that it is permissible to sell weapons to nations that will use them responsibly and protect the safety of Jews.  The Talmud asserts that the prohibition applies only to cities in which no Jews reside- i.e. one may sell weapons to those protecting Jews (and therefore moral, some add, since that implies a respect for minorities) but not to anyone else.

Medieval commentators explained this ruling differently.  Rabbi Menachem Ha-Meiri argued that we need to participate in the defense of the broader society and the prohibition on arms dealing applied only to the barbarians of the past.  Maimonides formulated this dispensation in terms of alliances, “If Jews have established a covenant with them, it is permitted to sell arms to the king’s servants.”

In modern times, Rabbi J. David Bleich reached a similar conclusion, arguing that arms could be sold to another country pledged formally or informally to mutual defense, and barring that, could only happen if absolutely necessary to protect life (as in an impromptu barter arrangement to secure resources).

Other scholars raised objections to the arms industry in the early 1980s, focusing on the case of Israel.  Rabbi Yehuda Gershuni contended that international arms sales could be justified only when they involved nations that had Jewish citizens to protect or would follow principles of ethical warfare.  Otherwise, Israel was providing a “stumbling block” that encouraged unethical behavior by aiding and abetting abusive states.

The fact that these countries could purchase weapons from other dealers could not justify any Jewish participation in murder. Rabbi Gershuni wrote that it should cause great shame to learn that Israeli-made weapons arrived via Eastern Europe in Rwanda during the height of the massacres of the Tutsis in the mid-1990s, despite the fact that the Defense Ministry had banned sales to that country.

Defenders of the Israeli arms industry, including Rabbis Yaakov Epstein and Joseph Polak, have responded that tradition fully legitimizes selling weapons to foreign nations if the goal is to secure Israel’s own self–defense, an argument I suppose could be extended to the US with its large Jewish population.

Former Chief Rabbi of the UK, Immanuel Jakobitz, on the other hand, argued that the only moral stance he found tenable with regards to selling arms was not to. In his letters, he pointed out that arguing that one must sell arms to countries so they can defend themselves ignores the fact that the international arms trade is what made those countries vulnerable in the first place. It is tantamount to saying one must sell a junkie heroin so they can defend themselves against the pain of withdrawal.

Despite pragmatic concerns that may have led some Rabbis to allow more leeway in selling weapons, we should not lose sight of the forest for the trees. The meta-principles of Torah tradition- of the Jewish ethical heritage- should be the guide. “All her ways are pleasant, and all of her paths are peace”, says the verse from Proverbs, chanted in synagogues every week. “This is the fundamental principle of the Torah: In the image of God made He the human being”, said Ben Azzai in the Sifra. Is it possible to reconcile such teachings with selling weapons to human rights abusers with a record of unlawful murder at home and abroad?