The Earth Protectors Of Latin America Versus Corporate Greed 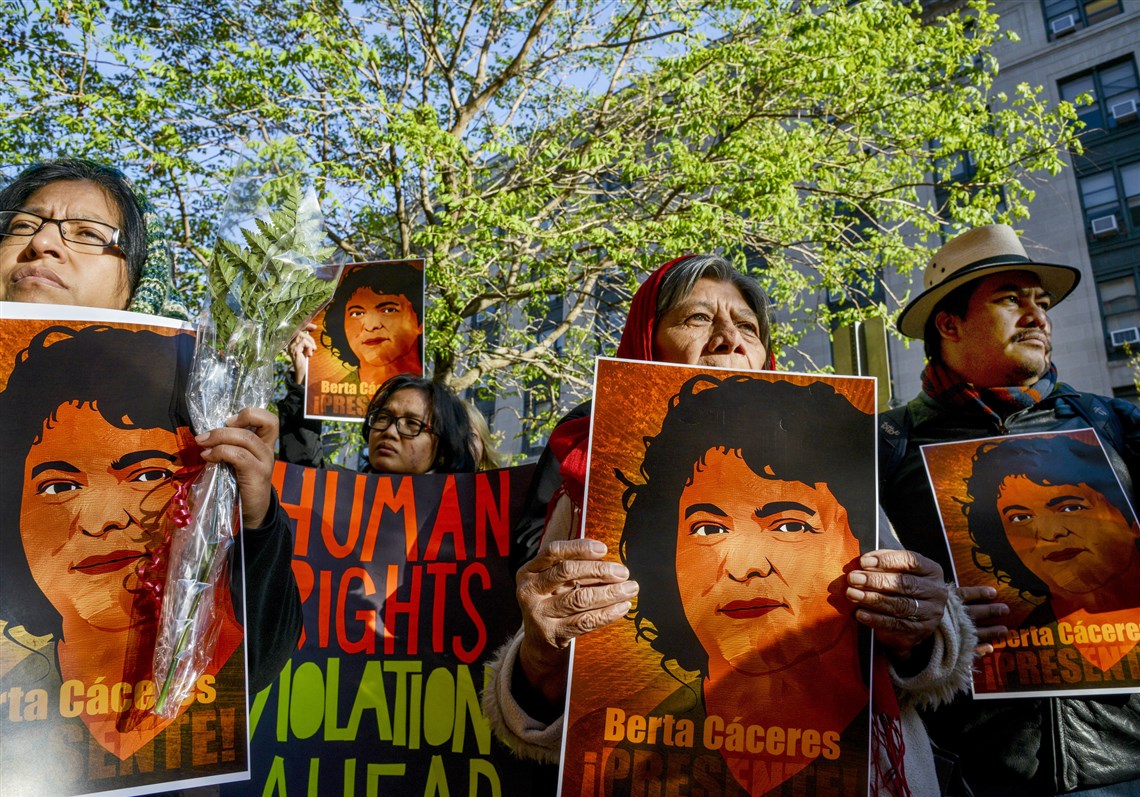 Daylight in the highlands of Guatemala reveals a vast landscape of mountains and valleys. Scattered throughout the rocky soil is a bright yellow mineral which Charles Dickens, in Nicholas Nickleby, once wrote “conjures up a mist about a man, more destructive of all his old senses and lulling to his feelings than the fumes of charcoal.”

That mineral is gold, a nearly useless metal with which humans have chosen to make the symbol and foundation for all of our imaginary systems of value, and for which ecosystems have been destroyed and whole peoples have suffered brutality and death.

The quote this piece begins with is from Gregoria Cristanza Perez, an indigenous Guatemalan activist and farmsteader who has been one of the brave earth defenders of her country, facing down one of the world’s most successful multi-national corporations, as well as threats, mob violence and espionage in order to protect the land and people of Guatemala.

The trouble for Perez and her Mayan community began close to home, when Montana Exploradora discovered gold in the mountains of San Miguel Ixtahuacan where they live. Montana was acquired by Francisco, who was acquired by Gramis, who was acquired by Goldcorp. Goldcorp is a Canadian mining company located in my hometown of Vancouver which specializes in a centuries old imperialist game close to the heart of capitalism, which consists in raking in huge sums from foreign based resource extraction projects, while tossing a reasonable amount of blowback at their own fawning and grateful government, at the same time giving a relative pittance to the local people who work the venture and suffer the consequences of its ecological and social impact themselves. They are not the only Canadian mine engaged in such behaviour.

Goldcorp’s Marlin Mine, which ran from 2005-2017 in San Miguel, was immensely profitable. According to figures in the documentary Gold Fever, in 2011 alone, Goldcorp made profits of 607 million dollars. The local payroll for employees in San Miguel however, came to 11 million dollars. In contrast, whereas a local family in San Miguel used 60 litres of water a day, the mine used nine million. The mine contaminated the water and the land. Animals got sick; children developed strange rashes; houses began to crack from the industrial earthquakes caused by dynamiting at the mine. This was terrifying for the Mayan community, whose life on the land is a complex weave of direct dependence and intimate emotional connection.

Gold mines like Marlin take a heavy toll on the local ecology, and what they give in return is short term profits and disruption of life on every scale. Cyanide levels at Marlin were found to be at three times IFC guidelines; copper and mercury were found at many times acceptable levels (by ten to twentyfold).

Marlin has been accused of building on and making use of indigenous lands without permission. When they put up electric posts on Gregoria’s land without consulting her, she was not impressed. She wanted them to take the posts off, which they wouldn’t, so one morning she tied up a piece of cable like a lasso and threw it over the lines, shutting off the power to the mine with her simple, rustic act of one woman sabotage. The company sent the police.

Perez avoided jail time and continued to be active against the mine, attending community meetings and protests. The community was divided, with some happy to take jobs from Goldcorp and others bitterly opposed to the pollution and the exploitative nature of the company’s relationship with Guatemala. In 2009, as Goldcorp met with shareholders in Vancouver, Perez led a march of hundreds of people through the streets of Guatemala City.

“We demand our rights because we do not want to be killed by the mining company,” she said. “We ask the government to please listen to our demands, as we are the legitimate owners of the territories. We are indigenous people, we were born there, and we should die there. But our death should be decided by God, not by the mining company.”

The division in the community of San Miguel spilled over into violence. One activist, Diodora Antonia Hernández, who had earlier narrowly evaded having her head chopped off with a machete because she was holding her grand-daughter at the time, was later shot in her right eye by an employee of the mine (the bullet missed her brain). Another activist watched helplessly, restrained from intervening, while local mine supporters lit her brother on fire and let him burn to death.

The violence directed at these environmental activists reflects a broader context of danger for those who stand up for the ecology in the region. In 2016, Berta Caceres, winner of the Goldman Environmental Award, was shot dead in her home, allegedly by an ex-member of Honduran military intelligence. Her crime was opposition to a hydro-electric dam. She is one of hundreds of environmental activists killed in South America in recent years. Her daughter, Bertha Zuniga, now leads the Indigenous rights organization founded by her mother. She survived an attack by armed men in 2017.

Marlin began operations in Guatemala without the prior consultation with indigenous peoples required by UN guidelines, as pointed out and criticized at the time by James Anaya, Special Rapporteur to the UN on Indigenous Rights. Anaya also noted that mining activities “have generated a highly unstable atmosphere of social conflict, which is having a serious impact on the rights of the Indigenous people and threatening the country’s governance and economic development.” Goldcorp, of course, calls this “development” and claims they are benefiting Guatemala.

In 2010, the International Human Rights Commission (IHRC) ruled that Marlin Mine should cease its activities in Guatemala, causing a fierce flame of hope to spring up among the Mayan community before it was snuffed out by their about face later that year, allowing activities to continue. The mine continued to operate until 2017, when it extracted all it could from the people of Guatemala and left behind a destroyed mountain, a non-operative hospital it had created for PR purposes, but not staffed or made actually operational, and a divided and traumatized Indigenous community.

Maudilla Lopez, a Catholic Nun known for her environmental activism and fusion of Christian and Mayan spirituality, regrets the loss of the battle with Marlin, but has set her eyes on the future, leading seminars for the next generation of activists.

“The mine is an assassin,” Lopez told the Global Sisters Report. “They do not kill with bullets, but they kill all the same by not respecting Mayan spirituality and the essence of our community life. I am working to present to other communities the importance of their heritage so the same thing does not happen to them. So they fight and stop it.”

Perez, Lopez, Hernandez, and Bertha Zuniga join Indigenous Earth Protecters the world over, from the Tsleil-Waututh and other First Nations of British Columbia, Canada who are fighting against the Kinder Morgan Pipeline and the Site C Dam to the Standing Rock Sioux of North Dakota whose stand-off against the Dakota pipeline ignited a historic series of protests last year. Together, they call those of us whose peoples arrived in these lands more recently to join their battle to save them.