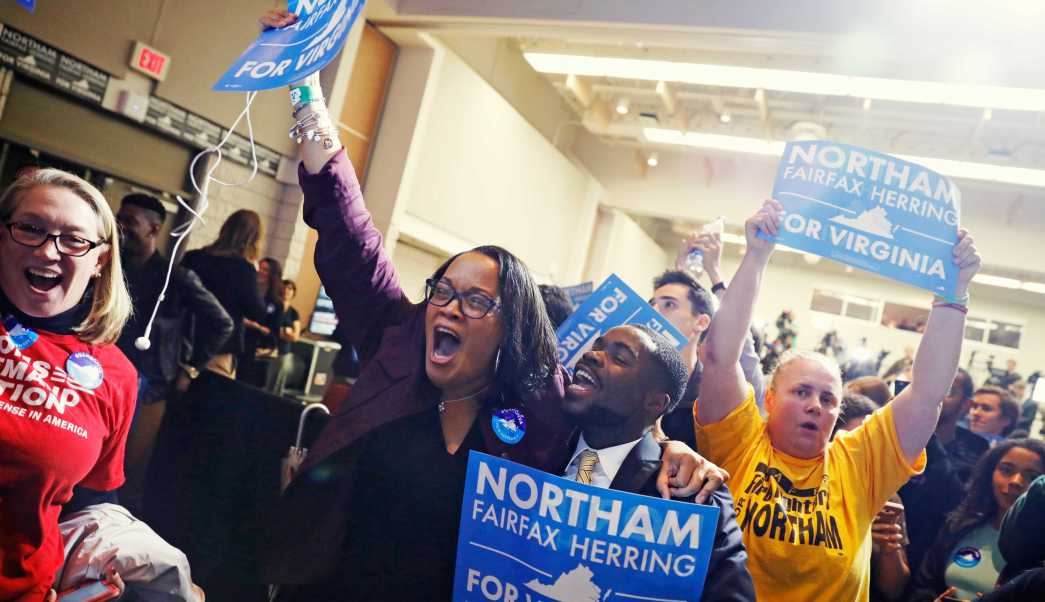 What a difference a year makes. It’s hard to reach any other conclusion when you think about the fact that one year ago today, Americans woke up having elected Donald J. Trump as president of the United States of America. Today, we awoke in a country that saw sweeping defeats handing to those people most closely associated with that same president. Not only the high profile gubernatorial races in places like Virginia and New Jersey but down the ballot at the level of statehouse, the level of county offices. Whether people like this trend or not, it is a real trend and it does demand attention.

The fact is, when a man who proudly called himself the homophobe in chief of his state, was defeated by a transgendered person, it’s pretty clear in that race, what people were telling. A certain part of this country that imagines one can be proud of being homophobic. When, in races where people move toward Trump in order to solidify the Republican base, they went down to defeat by as much as 10 points as was the case, almost 10 points, as was the case in New Jersey, in a campaign that most people thought was run rather poorly by the Democrat, not that he’s a poor candidate, just wasn’t well run. Something profound is happening in this country and we have woken up to that reality.

What a difference a year makes. That message was sent to president Trump. Whether he will hear it or not, is hard to know but what is the message that was sent? That’s what’s less clear. In fact, there are ironic parallels between what happened in yesterday’s elections and the very same psychology, which I think many people see as having led to the election of Donald Trump, the man who was largely rejected by voters, whose positions were largely rejected by many voters in many elections around the country yesterday. It turns out that in many ways, people probably voted for Donald Trump in the last election not because they were so fond of Donald Trump, because they were so hostile to Hilary Clinton.

It may be that actually, what happened in yesterday’s elections is that people were simply so hostile to Donald Trump, they voted for alternatives without knowing exactly what it was they were choosing. That points to a larger question that effects us, not only politically, but personally and may really indicate that even though the results look different, the realities haven’t changed as much as some of us might hope and that a year doesn’t make so much difference after all. What if it turns out that this election, more than anything else, was about the fact that we find it easier to organize, mobilize and energize around opposition, far more than we do around proposition.

What if it turns out that Donald Trump rode a wave of hostility to his competitor, not to embrace of his values? That, yesterday, people rejected him without necessarily embracing the values and positions of the victors in yesterday’s races? If in fact, that is what happened and there is plenty of neuropsychology and social psychology to tell us that people really do organize, mobilize and energize better in opposition to things than in favor to things. That we work more effectively in the short term from opposition than proposition, then we may be dooming ourselves as a country. To an endless ping pong match between extremes that will serve most of us poorly every time?

Maybe the real take away from this election, especially for those of us who may be pleased by what it seems to indicate in the short term, maybe the real message here is that we have to figure out how to get better at responding in favor of things than we do simply in opposition to things. That whatever we know about the human psyche that may naturally propel us toward working from negative motivations more than positive motivations, maybe the real practice we all need in our lives, one voting booth at a time, one conversation at a time, pick any place in our lives and actually ask where most motivated, am I doing this because of something I hope for and yearn for and want to create or because of something I’m simply so disgusted by that I feel I have no choice?

Most of us will probably find it’s a combination of both more often than not but, if we hope for a saner and better politics and I would think probably saner and better lives. That shift from opposition to proposition, from mobilizing, organizing and energizing, at least a little bit more because of what we love than against what we hate, that will serve us all far better politically and in every other part of our lives.