The Childlike Joy of Discovering Yourself 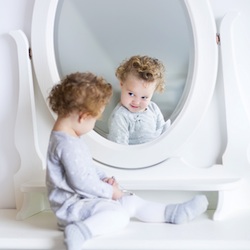 Walking out of the locker room at the gym the other day, I was holding the door for a father and his three-year-old daughter, Emma, who was trailing behind. Emma was adorable, chattering non-stop to her father, to anyone and to no one in particular.

As I held the door, the girl’s father walked through, but then there was no Emma. She had stopped, and from our vantage point all we could hear was a little child’s voice saying, “Bye-bye Emma, bye-bye Emma.” After her father called out, “Come on, Emma!” she came running out the door. That’s when she looked up at her father and calmly explained, “I was looking in the mirror and saying goodbye to myself.”

Activating our best selves is one of the great tasks of a flourishing life.

What wisdom from this little girl! Each one of us has so many different identities and selves; they live within us, they get fixed and frozen and want conflicting things.

I know that, more often than I would like to admit, I don’t act from my best self – but from a fearful self, a protecting self, a controlling self, a skeptical self, a hungry self, a vulnerable self. Getting a handle on our multiple selves, and activating our best selves, is one of the great tasks of a flourishing life.

I’ve decided I’m going to put little Emma’s wisdom into practice. For the next few weeks, when I spot myself in a mirror, I’m going to look beyond the superficial and take a moment to ask the deeper question, Who am I today?, in order to reflect about which of the many Irwins I would like to say goodbye to. Thanks, Emma!