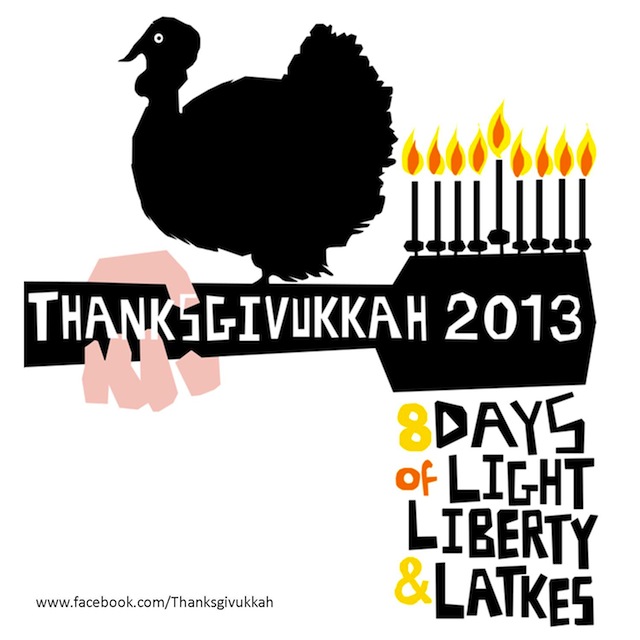 Call it a simple coincidence, call it Thanksgivukkah, call it a once-in-a-lifetime opportunity to integrate the quintessentially American and the quintessentially Jewish, but whatever you call it, and whether you are Jewish or not, celebrate the abundance and possibility in your life this year, as Thanksgiving and Hanukkah overlap.

From recalling a group of brave, hopeful, religious outsiders, the Pilgrims, who boarded leaky ships bound for a place they did not know, to a group of equally brave and hopeful religious outsiders, the ancient Israelite clan known as the Maccabees, who took on a fight they had little chance of winning, these are stories of recognizing possibility and celebrating abundance.

In each case, as in all of our lives, the story could have gone in a different direction.? The pilgrims could have stayed home, or could have resisted celebrating when so much around them was still so rough and so terribly uncertain.? The Maccabees could have also stayed home, or could have decided that there wasn’t enough oil to keep the Temple Menorah burning, so why bother lighting it at all, thus robbing us all of the inspiring story of the little jar of oil which lasted longer than it “should” have. But they didn’t.

They did make the journey, and they did fight and light.? In both cases, they trusted in the possibility of the moment, and in the abundance they possessed. That’s what allowed both the Pilgrims and the Maccabees to undertake their respective challenges, and just as importantly, to celebrate before the story was over. We can do the same thing in our own lives.

Whether at the table around a turkey, around a menorah set with candles, or wherever else you find yourself this Thanksgiving or Hanukkah, trust and celebrate that there is more in your life than you may know, and more possibility for you in the future than you may imagine.? Do that, and you join the ranks of some of the greatest heroes of both American and Jewish history.? And if not this year, when?