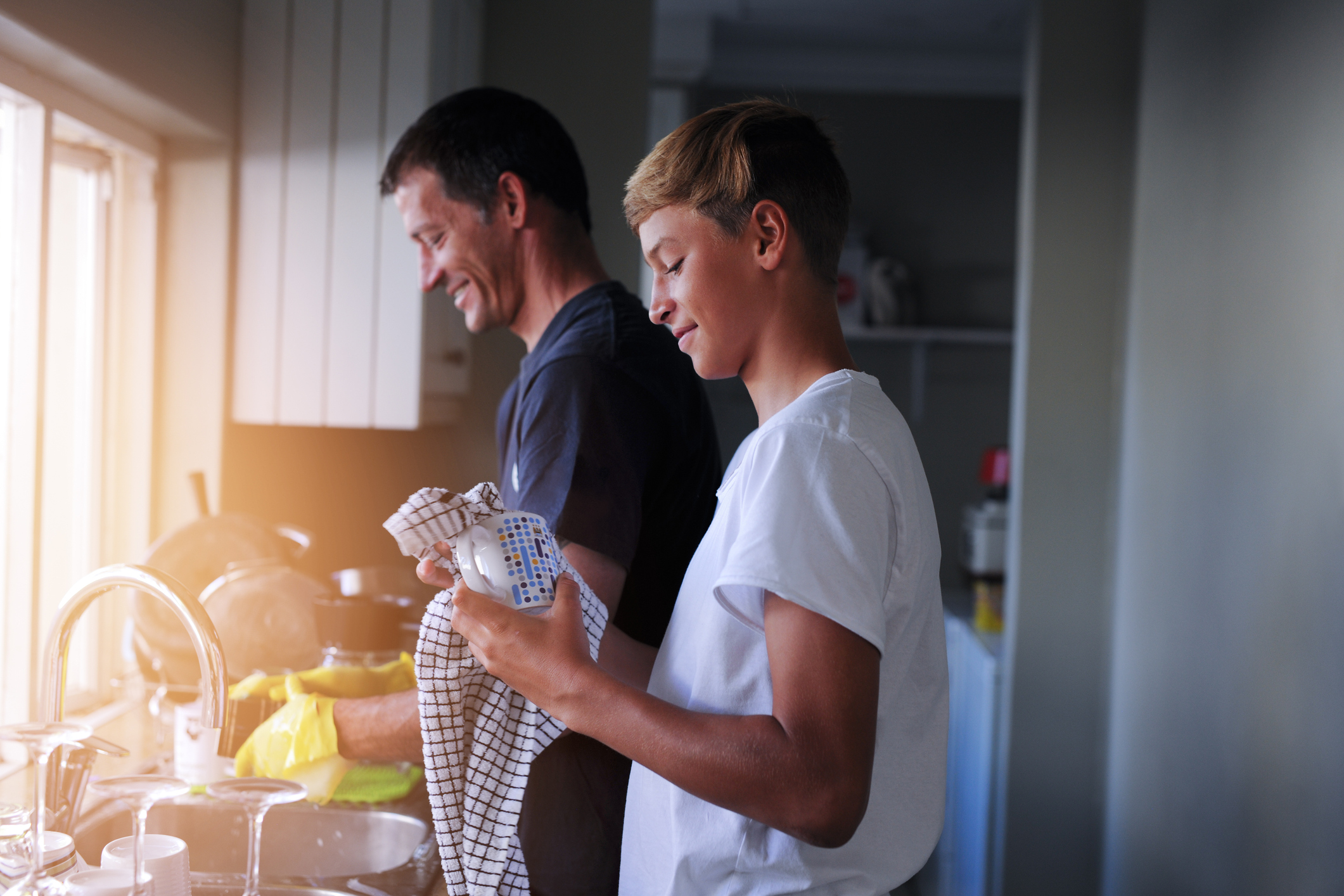 Fostering responsibility in our kids is a common parenting thread that weaves from toddlerhood through adulthood. Sometimes this involves trudging through the parenting trenches, knee-deep in hurling reminders and blocking negative behaviors. But other times, the best way to do this is to let go and give our kids the chance to prove themselves without hovering over them.

It’s important to know that every personality is different and there isn’t a parental golden ticket that will guarantee our kids will always behave perfectly, but there are ways we can tweak our language to help facilitate smoother outcomes. The goal is to shift the responsibility from the parent to placing the responsibility on the child or teenager by giving them opportunities to practice life skills such as meeting deadlines, time management, and the benefits of exceeding expectations.

The word “practice” here is key, meaning they won’t always get it right the first time, and that’s okay. It’s a learning process, just like learning to walk or riding a bike. It can be tempting to think they aren’t ready or to take over a task that you can do much more quickly and effectively  (such washing the dishes or mowing the lawn) but that won’t help them develop their own efficiency skills.

It’s also important to understand the difference between obedience and responsibility. The Center for Parenting Education explains: “Most parents would love their children to do what the parent asks, to follow directions and to not question their authority – understandable and important goals when raising children. However, this is not responsibility! These behaviors would be classified as obedience. Over time, most parents want children to accept ownership for a task or chore – the children do it because it needs to be done and accept that it is their obligation to do it. Over time, they may even initiate doing a task ‘because it needs to be done’ – not because they are being told to do it. This attitude would be called responsibility. Parents may have to give up having things done exactly as they would like them to be done and on their exact timetable in order for a child to move from obedience to responsibility. But allowing a child to ‘do it his way’ will encourage a feeling of pride in accomplishment and foster a sense of responsibility.”

A common scenario that many parents grapple with is getting their kids to complete a chore without repeated prompting, threatening discipline, or in general teetering on the brink of losing our sanity. (Any parent who has repeatedly stepped on a lego while barefoot should automatically qualify for sainthood.) Here are two situations, both with the same goal of having a kid clean his or her room but demonstrating how a slight change in parenting behavior can lead to different results.

Scenario 1: Responsibility on the Adult: The parent assumes that the child’s definition of “clean” is the same as theirs without clearly explaining or modeling how the bed must be made neatly, clothes are folded and put away, the floor is picked up, etc. When the adult asks for the room to get clean, the child/teenager procrastinates, does it poorly, or not at all. The parent then reminds, nags, threatens, or disciplines until the child complies. After a major power struggle, the room may end up only somewhat clean, causing more frustration from both sides.

In this situation, the outcome of a clean room is completely dependent on the parent by micromanaging the process until it is complete.

Scenario 2: Responsibility on the Child/Teenager: In this situation, the parent proactively teaches the expectations of an adequately picked-up room ahead of time. The parent gives a deadline of having a clean room, such as by the end of the next day or within three days. The child/teenager can choose when he or she cleans, as long as it’s fully completed on time. If he or she does not clean his or her room, they know in advance that they will have a consequence. (A reasonable and related consequence would be to clean additional rooms in the house.) No yelling, nagging, or reminding is necessary on the parent’s part because the child/teenager is fully aware of their expectations and what happens if they don’t fulfill them.

In the above scenario, the outcome of cleaning the room is dependent on the child or teenager, fostering real-world responsibilities, which is ultimately a win-win for both sides.

In a perfect world, our kids will eagerly help out with a grin instead of an eye roll, skipping off to do chores like they’re in an episode of Leave It to Beaver. But chances are, most kids won’t respond with an enthusiastic “Gee whiz, Mom, I’d love to!” when they need to pitch in around the house, even when you’ve been proactive, set deadlines, and established related consequences when they don’t. Here are ways to help:

1. Attitude = Additional Responsibilities: Even if your kids do what you asked but only with a giant side of attitude, that’s still not helping prepare them for the real world. (Imagine a boss’s reaction with the same behavior at their first job.) You can explain that they don’t have to like doing chores (heck, we don’t either!) but they do need to buckle down and do them without impersonating an internet troll. It’s part of the deal for them having privileges like their parents buying them clothes, living at home, having meals provided, purchasing toys and gadgets, taking them on excursions or vacations, etc. If they are constantly grumbling or bemoaning having responsibility, then more responsibility may be in order until it’s less, shall we say, devastating for them. Avoiding asking kids for help to avoid an argument only encourages them to repeat the negative behavior.

2. Refusal to Help = Privilege Loss: There are some behaviors that we want our kids to do and some behaviors we want them to not do. Dr. Thomas Phelan, a psychologist, author, and creator of the 1-2-3 Magic parenting program and book, refers to these as “Start Behaviors” (like doing chores, homework, or sharing) and “Stop Behaviors” (like hitting, kicking, talking back, and throwing tantrums.) Ultimately, if a kid digs in his or her heels, it’s difficult to make them do a “Start” behavior without a major battle. But you can instill consequences, such as time outs or taking away privileges like cell phones, tablets, T.V. use, or a certain toy until they decide to cooperate. The best results are when this is set up as their choice, such as matter-of-factly and calmly saying “You can choose to have your room cleaned by the end of the day, or you can hand over your phone. It’s up to you.” This puts the ball in their court, rather than an ultimatum like “Clean your room or else I am taking away your phone.”

3. Reward a Job Well Done:  Have you ever had a boss or someone in your life that only points out what you did wrong and not what you did right? After awhile, it’s easy to lose motivation to portray your best efforts if it doesn’t seem to make a difference anyway.  If you notice your child/teenager going above and beyond, be sure to reward them with positive reinforcement, much like a raise, bonus, or promotion in a job. Dr. Phelan encourages the use of natural reinforcers that often motivates kids, such as satisfaction of a job well-done and verbal praise.  If natural reinforcers are not enough, then artificial reinforcers may be introduced, including sticker charts, additional privileges, a fun activity, or a new toy. Once they start developing good habits, you’ll want to keep the momentum going. If they get to the point of doing chores well without any coaxing or reminders on your part, that’s really something to celebrate.

Running a household is much like running a company. Often, the most successful types of leaders are those who clearly establish boundaries, have high expectations while seeking to develop others’ potential, and who foster an encouraging, and fair environment. Hopefully these tips can lead to a smoother parenting adventure (literally, if those darn legos ever get picked up.)

Lindsay Richardson is a writer and educator who has been published in a variety of major publications. She loves writing honestly and humorously about life experiences and lives in Chicago with her husband and two children (three if you ask the dog.) You can visit her website Hope and Happy Hour or follow her on Instagram: @hope_and_happy_hour.