Shelter Me: Faith in an Imperfect World 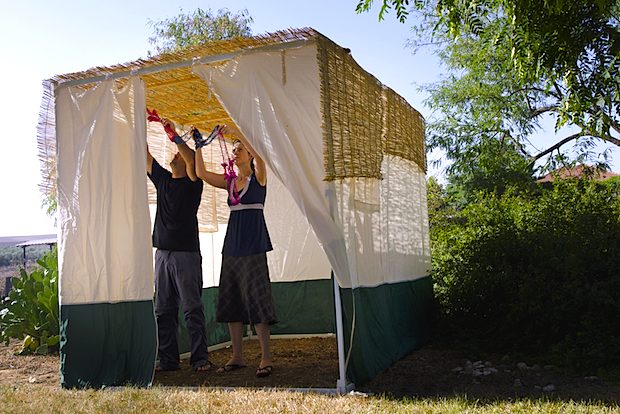 At this time of year, what is the importance of the sukkah? The temporary shelter stands with a roof made of branches that do not provide a full cover. If it rains, the inside is made unusable and a very strong wind may knock it down. And yet we plan the weeklong autumnal holiday of Sukkot to be spent eating (and in some places, sleeping) under it. The sukkah is also called tzila mehemnuta, or shadow of faith, not just because one has faith that the weather will oblige, but because the precarious positioning of the branches illustrates the fragility of life itself – and the challenge of faith that goes with it.

Thomas Merton, the influential Trappist monk who lived a life of service and contemplative prayer, was not in a sukkah when he was struck by this vision on a cold December morning:

“And this morning, coming down, seeing the multitude of stars above the bare branches of the wood, I was suddenly hit, as it were, with the whole package of meaning of everything: that the immense mercy of G*d was upon me, that the Lord in infinite kindness had looked down on me and given me this vocation out of love, and that G*d had always intended this, and how foolish and trivial had been all my fears and twistings and desperation.”

However, Merton’s revelation after a night of keeping vigil at his monastery is strikingly reminiscent of the experience of being beneath the branches of the sukkah.

I came across this powerful quote when another inspiring and influential Catholic, Pope Francis, chose to speak of Merton in his historic address to Congress last week (along with his mentions of Abraham Lincoln, Dr. Martin Luther King Jr. and the activist Dorothy Day).

While we sometimes conflate the sacred with the ideal, The Pope’s words to lawmakers at the U.S. Capitol elevated the discussion of what is pragmatic and necessary in society to the level of the holy, by reminding legislators what’s at stake in their ability to change lives through compassionate policies.

As Thomas Merton did, Pope Francis emphasizes the teaching that one who seeks only what is ideologically pure often sacrifices the good that they can do in an imperfect world. And yet, to act with faith is to treat the world – and especially other people – not as flawed, but as infinitely valuable.

The Pope alluded to this fragility in his remarks to the crowd gathered on the National Mall when he asked them to pray for him, and, if they weren’t believers, to send him good wishes. What he expressed is a paradox of faith. Faith is not perfect belief. Faith is action, even in the face of that which challenges everything we believe or want to believe.

On his visit to Washington, D.C., it seems to me the Pope lived one of the great lessons of Sukkot (and of the spiritual teachers he cited, too) when he eschewed a chance to lunch with the powerful in order to spend his time eating a meal with local homeless citizens. The open space of the Sukkah is a place of invitation, meant to both literally be shared with those in need, and to inspire us by its temporary nature to think of those who live without security every day.

As I build my sukkah this year with branches through which I’ll see the stars that struck Merton with such clarity, I’ll seek to invite him – and the remarkable Dorothy Day, Dr. King and President Lincoln – to be part of my experience, and to learn from them anew the core teachings of the Shelters of Faith.