Should a Public School Coach Be Praying With Players? 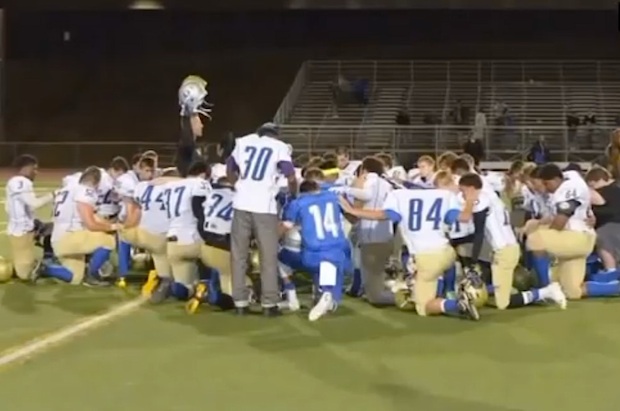 Which does the U.S. Constitution guarantee – freedom of religion, or freedom from it? The short answer (as with so many constitutional issues) is: It depends. Contextualism and the ongoing ability to interpret the document are two of its greatest strengths, helping assure its durability and relevance.

There are settings where an enforced absence of public religious expression is required (bans on prayer in public school classrooms); other situations allow for religious expression, as long as all religious sensibilities are respected (wearing a cross, a yarmulke, a hijab or whatever religious symbols/clothing someone chooses). The overriding concern, all around, is protecting freedom, whether it’s to express your faith or to be free of undue pressure/exclusion that may result from others’ religious practices.

All of which brings us to a current case at a high school in Bremerton, WA. Assistant football coach Joe Kennedy has been told that he can no longer engage in personal prayer in a public location, i.e., on school grounds. The coach had, since 2008, taken a few moments after a game for prayer. He says that he never invited anyone else to join, or even prayed aloud, though he did so on the field after the game ended. As time went on, others reportedly noticed his practice and chose to join. But now he faces disciplinary action from his school district if he continues the ritual.

The essence of the school district’s objection seems to be that people can see the coach pray.

So what do you say? Is this a hostility to religion in a school district run amok with its own power? Or is this a straightforward defense of the constitutional “wall” separating public institutions and the endorsement of one particular religiosity?

As with many of these questions, the answer each of us arrives at will tend to fit into what we were already inclined to believe. But, who knows, perhaps that’s how we all make most of our decisions – fitting perceived realities into preexisting paradigms. We are, after all, creatures of pattern if not habit. Still, Coach Kennedy’s case offers us all a chance to break out of our usual knee-jerk reactions, the predictable patter from culture warriors notwithstanding.

The essence of the school district’s objection seems to be that people can see the coach pray. (A Washington state education official recently expressed concern that Kennedy’s actions make the district vulnerable to lawsuits.) According to the local superintendent, they would be glad to provide a place for the assistant coach to pray, so long as it’s not “observable to students or the public…for example, a private location within the school building, athletic facility or press box could be made available for brief religious exercise before and after games.”

Had the coach’s post-game prayers not grown into a popular (albeit entirely voluntary) practice, I imagine the district would never have said a word. There’s no doubt that as a popular leader at the high school, Kennedy’s actions carry greater influence than others’ do. And that with increased influence comes greater responsibility. That said, would the school object to a Jewish teacher wearing a skullcap in class, a Muslim wearing a hijab or a Sikh wearing a turban? I certainly hope not, even though they’re also silent religious expressions which could arguably constitute a public endorsement of a teacher’s faith – and a potentially coercive pressure on students who don’t share it.

My answer? As cautious as we need to be with church/state separation, I believe that the official school response to Coach Kennedy is not only unfair, but may actually drift from the protection of religious freedom for all toward a practice of hostility to the religion of some.