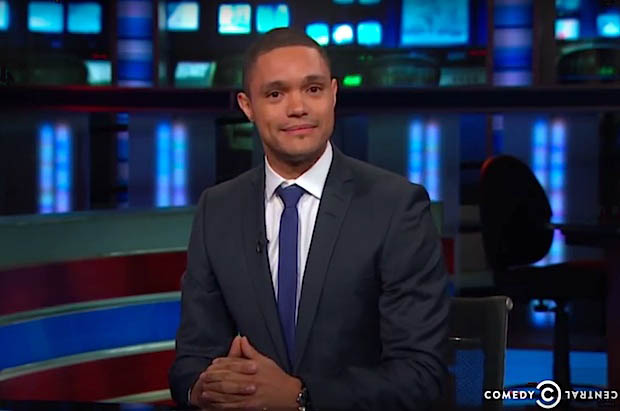 Every week on The Wisdom Daily, we bring you our favorite reads from sources around the web. Today, these fascinating interviews and essays cover incoming Daily Show host Trevor Noah, the tattooed minister forging her own path, the random events triggering vast cultural shifts, the longtime habits we wish we could break, the prescient films of Fritz Lang… and more. Whatever’s transpiring in your life, may you find the words of wisdom you need.

“The show will be a representation of my interests, and the interests in the room. We all live in America. But as America is increasingly learning, if a butterfly flaps its wings on the Chinese stock exchange, there’s a good chance it affects America. Syria’s crisis has gone from the Syrian crisis to the Greek crisis to the European crisis. And very soon, it may now become an American crisis.”

– Trevor Noah, on his debut as host of The Daily Show (The New York Times)

“Ideas, not technology, have driven the biggest historical changes. When technology changes people, it is often not in the ways one might expect… And when culture does change, the precipitating events can be surprisingly random and small.”

– Tom Vanderbilt, “Why Futurism Has a Cultural Blindspot” (Nautilus)

“I don’t monitor people’s behavior… on some level Christianity became about monitoring people’s behavior, like a sin-management program, and that almost always fails and often backfires. I would actually argue that conservative Christianity’s obsession with controlling sexuality has in fact created more unhealthy sexual behavior than it has ever prevented.”

“Breaking a habit really means establishing a new habit, a new pre-potent response. The old habit or pattern of responding is still there (a pattern of neuron responses in the brain), but it is less dominant… You only really know if you’ve broken the habit when you’re challenged somehow.”

– Timothy A. Pychyl, “How Long Does It Really Take to Break a Habit?” (Hopes and Fears)

“Lang’s world is one of moral ambiguity where there is no such thing as good and evil, only pain and guilt, real or imagined. No matter what genre he was working [in] no director of that period did more to indict the callousness of society… What’s clear now is that Lang was never bankrupt of ideas or talent. He was only guilty of forcing audiences to confront certain uncomfortable truths about life from which most people tend to recoil.”

“Where I want to be is in what I call the big magic, which means suspending a lot of rational thought. I mean, listen – I have one foot with the fairies and one foot with the real world. I believe in evolution, I believe in vaccinations, I believe the world is round. I am here with everyone in the modern world. But I also think it’s a benefit to keep a piece of ourselves open to the creative process as something that’s a little mystical and magical.”

– Elizabeth Gilbert, “The Link Between Creativity and Curiosity” (The Science of Us)