My New iPad, A Woman’s Claw-Like Nails, And Me: A Bad Mix 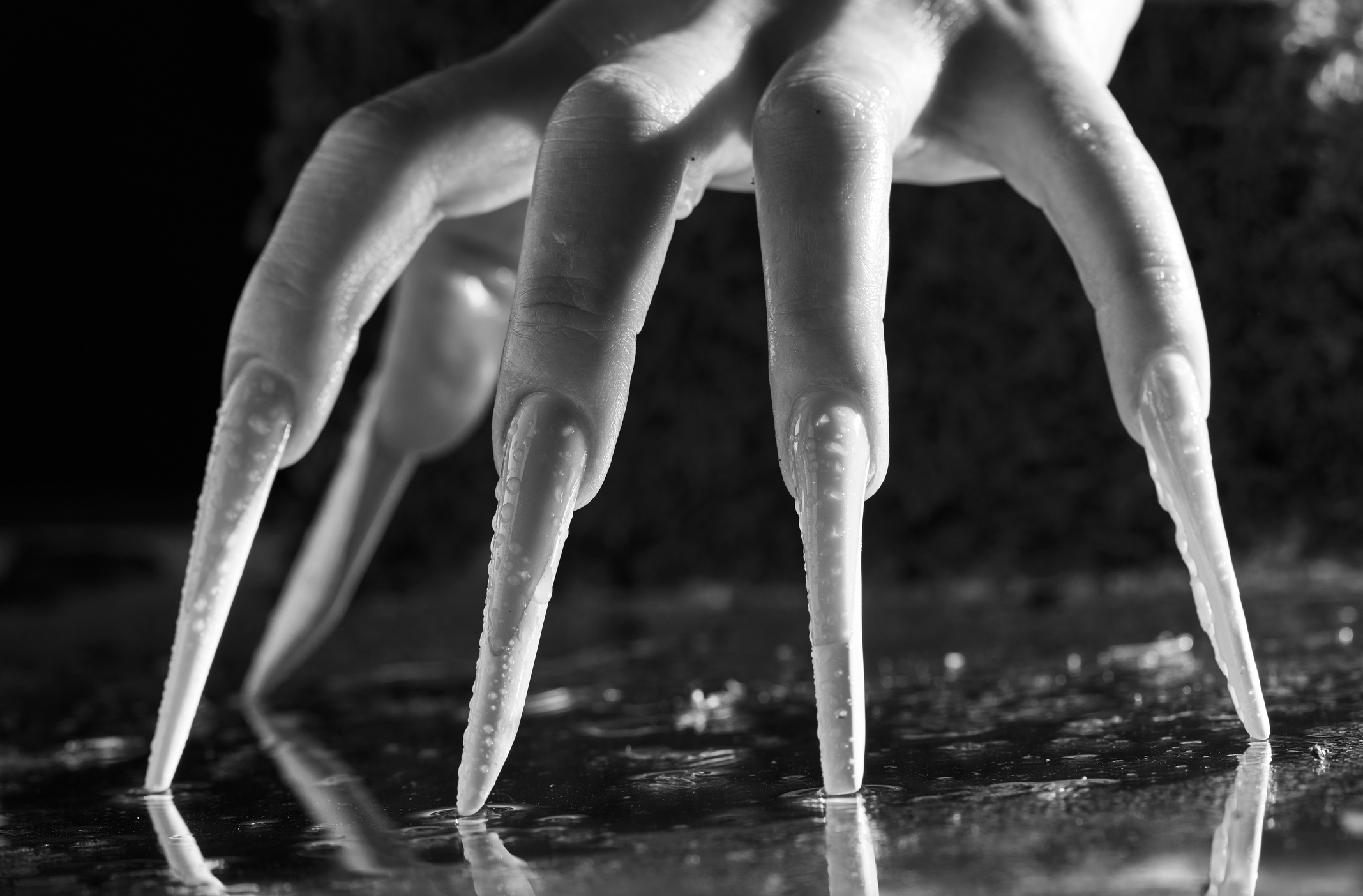 Buying electronic equipment — computers, iPads, and phones — pushes so many of my quirky buttons and sources of anxiety. Each time it happens, I feel like I’m on the front lines of a horribly dangerous battle. I put it off for years longer than I should, to the point where compatibility with new devices is dicey and transferring information is precarious: the old devices can no longer communicate with new devices’ operating systems. And this dredges up so many fears about losing my precious work, my well-thought-out communication with all kinds of people, in the midst of attempts to sync old devices and new. At a certain point, I dive in and buy the new device, but there is always some reason to feel unhinged for weeks until everything is sorted out.

I know how absurd this could sound. People are scraping by in all kinds of fragile situations — unable to afford food or proper housing, suffering with severe illness, enduring abuse in the midst of relationships they feel powerless to break — and I complain because I bought a new iPad. But I’m a firm believer that stress and contentment are determined by an idiosyncratic balance of life situation and internal psychological and physiological makeup.

Many people can be relatively calm in the midst of problems that would completely unhinge me. “Life is quite good. The chemotherapy takes a lot of time and often drains me, but, other than that, everything is fantastic!” I overheard a woman tell her friend over scones at a café. Now, maybe she’s an incredible actor, but she actually looked and seemed calm and pleased with her overall situation.

Meanwhile, if these two pals ever glanced in my direction, they would have spotted a short woman hunched over her tea and Danish, hands shaking from nervousness and regret. My thoughts ran in a repeating cycle that wasn’t remotely pleasant or even interesting: “Why did you let her do that? You could have stopped it! It wouldn’t have been hard. What is wrong with you?”

What was my crime? I let a woman at my local Verizon store touch my iPad screen with her super long, horrifyingly sharp, most likely not even natural nails. My brand-new iPad. I finally, finally dredged up the bravery to buy it, and then I let this happen.

It all came about because of a highly unfortunate glitch. A few days after buying my new iPad — after harrowing but ultimately successful efforts to download the information from my old, mostly broken iPad to my new one — I decided to take my new device outside. This took a certain amount of emotional fortitude, but I decided I was up for it. I felt ready. I bought the iPad in order to use it, after all; if I was afraid to do that, there was no point in having it.

I sat down at a public table in Harvard Square, ready to check for messages and look at Facebook. Doing this would make sure I could get online when Wi-Fi wasn’t available: I had paid extra for that capability with the iPad. But it wasn’t working! I couldn’t get online!

I ducked into the Verizon store where I had bought it, thinking this would be an easy fix, but it wasn’t. My SIM card was bad and needed to be replaced, and the iPad had to be removed from the brand-new keyboard/case that I had oh-so-painstakingly managed to put it in. There had been no disasters so far with the iPad and I was so relieved, but this was about to change.

A youngish man swept the iPad out of my hands to take a look. He placed it lightly on his knee and soon almost dropped it: I had to lunge over to his lap to save it. He didn’t apologize, just kind of laughed a bit. When he said he didn’t trust himself to take the iPad out of the case (I was afraid to do it myself: my extremely poor coordination and spatial sense is one reason new equipment makes me so nervous), I was relieved.

But the woman it got passed to had those nails. I noticed them right away and considered saying, jokingly: “You wouldn’t even think about touching my screen with those nails, right? They’re really nice, but I’m sure they’re sharp,” just to avert a problem. But I was embarrassed. I had already gasped and come close to screaming when the man almost dropped the iPad, and expressed my alarm at having to remove it from the case. I figured I’d try to seem normal and just go with the flow at this point. I’d say that led to one of the biggest lessons in all of this. I should never go with the flow, unless the flow does not touch on something that will bother me later. The flow of this woman’s nails went far beyond what I could handle, emotionally and even spiritually.

Before I knew it, one of those nails made contact with my screen. The contact was so real, so absolute, so undeniable, that I heard it happen. I can hear that tap-tap-tap of her nail against my brand-new screen even now. Even now, it makes me feel on the verge of crying or screaming. I didn’t say anything then. I tried to forget about it. But I couldn’t. Every 3 minutes or so, I would remember. What if she scratched it, even subtly? What if I wound up noticing the scratch when the lighting changed, and from then on, it would show up whenever I looked at the screen? What if she somehow loosened the substance that holds the screen together, and it wound up cracking at some future point because this had happened?

I pictured her doing it, again and again, each time wanting to yell before that first fateful moment when one of her nails made contact with my screen: “Stop! Sorry if this sounds bizarre, but I just bought that iPad and your nails are awfully sharp and long. How about if you guide me and I’m the one who actually touches the screen?” But that’s not how life works, how time works. Imagination has extraordinary power, but, unless we unlock some kind of force that goes far beyond any ability I’m aware of, we can’t edit actual history when we imagine scenes that have happened. We can fantasize about how we might have done things differently, but the facts are the facts, embedded in the fabric of the past.

In a move to make my obsessing more productive and intellectually stimulating, I Googled “long sharp nails” to see if anything resembling the Verizon worker’s nails showed up. Sure enough, I came upon highly similar specimens that were made of acrylic. I Googled acrylic and discovered that it’s harder than glass. Human nails are considerably softer, but acrylic is a different story. So, by that logic, acrylic could scratch glass! A substance that could easily scratch my screen came into contact with it within days of my purchase!

I was still within the exchange policy. Though I’d had a hard time downloading the data I wanted on the iPad, I knew I could do it again. But I’d have to get my current iPad out of that case yet again and gather together all the component parts… this is the kind of thing that unhinges someone with my particular combination of obsessiveness and lack of organizational ability. And… what if I was somehow mystically connected to the iPad I already owned? It felt weirdly tragic to exchange it at this point.

I examined the screen in all kinds of environments. I shined flashlights across it. I woke up at 5:30 a.m. along with the sun, to see how the screen would look in that harsh early-morning light. I didn’t notice any damage and tried to blot this whole situation from my mind.

But I couldn’t do it. That tap-tap-tap kept bursting into my consciousness. Finally, I returned to the store and said I’d like to exchange my iPad for a new one, explaining what had happened. The person I spoke to was nasty about it and said I’d need to pay a $30 restocking fee. But that was so unfair! This wasn’t my fault! A Verizon employee had compromised my brand-new equipment! I had proof that acrylic nails were harder than glass. “Not the iPad’s glass,” said the Verizon guy: an employee I hadn’t worked with before.

I decided that, if I had to pay the $30 restocking fee, it would prove that all the love and grandeur within our precarious world was breaking down into damage and tragedy. And I wouldn’t let that happen! I called Verizon phone support and spoke to people there. They agreed to cover the restocking fee and gave me some extra credits besides. My account currently has a credit of $130 for all my pains.

So I returned to the store, ready for the exchange, feeling ever so slightly better. I spoke to a manager who was relatively cordial about the exchange. He took out a special cloth and wiped the screen. “This is absolutely pristine,” he said. “Look.”

It did look amazingly nice. His cloth seemed to work some kind of magic. “I can exchange this if you want, but maybe just think about it. If you keep this screen, I’ll give you a free Zagg screen protector for it.” I asked him if he would install it, and he said yes. He even let me keep that seemingly magical cloth.

But to make that decision right then felt too extreme. I had to examine the screen again in the comfort of home, think about it, run it by a few friends and family members. Wake up again at 5:30 and examine it against yet another harsh sunrise. He said I could mull it over for a few days and get back to him.

As I type, I have my original iPad, with the screen protector. I was worried that the manager wouldn’t put it on properly after all that, that he would do more harm than good and then I’d be left with a screen that had been touched by acrylic nails and damaged by a mishandled screen protector. But all seems good so far. I have calmed down. New worries and adventures have taken over my mind.

From now on, I won’t let anyone other than me touch my equipment. Ever. Even tech support people. Now I have an excuse: I’ll tell them I once had a run-in with some very sharp nails against my screen, and I retain an insurmountable imprint of trauma from the ordeal.

They’ll probably think I’m nuts. And that’s quite OK, if it saves me from the kind of gnawing, persistent obsessing I know I can fall into. There are far worse things than being nuts. Like letting fear of what other people think stop us from taking care of ourselves and from fully engaging with how we think, how we feel, and how we’re likely to react.