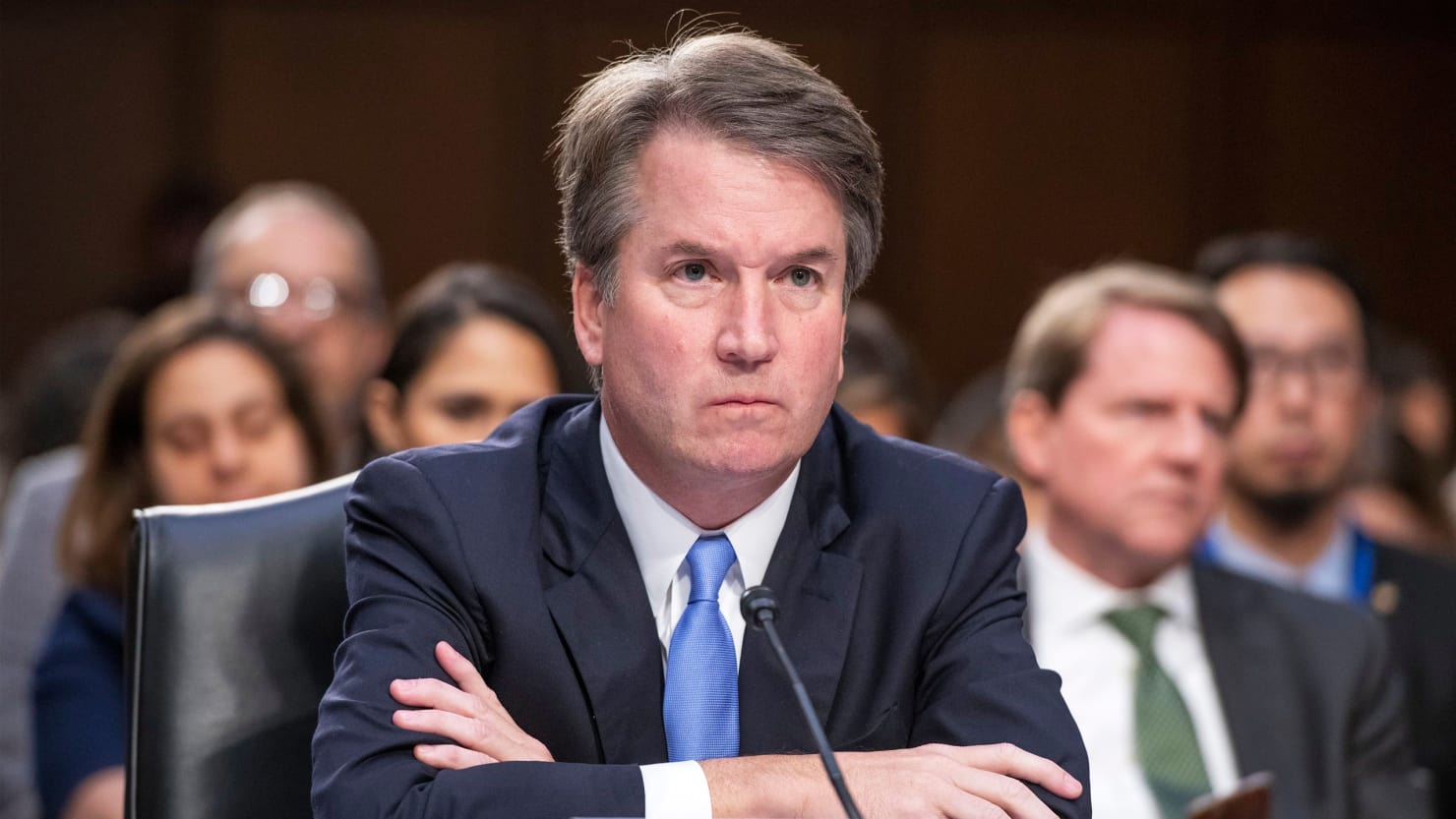 I’m not qualified to rule on whether Brett Kavanaugh committed sexual assault or not, and as of this writing, I don’t know what the outcome of the accusation will be.  But I do know that he is unfit to be a judge, at least according to the guidelines that Jewish teachings have promulgated about the qualifications of judges and any kind of leader.

Leviticus 24:22 reads, “One law there shall be for you, as a stranger, as a citizen it should be for I am the Lord your God.”  So a judge who does not believe in equality before the law has no place in the legal system.  Here, then, are a few ways that Kavanaugh has displayed he is not qualified, according to a Jewish view of jurisprudence.

Here are some specific reasons why Kavanaugh should not be appointed:

Gambling –   The Washington Post reported that Senator Sheldon Whitehouse of Rhode Island asked detailed questions about Kavanaugh’s finances, including credit card debts that may have resulted from sports gambling. The Legal Sports betting site concludes that “Kavanaugh likely engaged with gambling.” In a list of those invalid for giving testimony or being judges, Sanhedrin 3:3 states that “These are invalid: dice-players, usurers, pigeon-flyers, and sellers of Sabbatical goods.  Though Kavanaugh’s betting may have been casual, the sums involved are not.  The fact is that any judge who is in desperate need of money to cover his gambling opens himself up to being bribed.”

Siding with the wealthy  – Kavanaugh belongs to a country club that costs $92,000 for an initiation fee and $9000 a year in dues.  While wealth is not disqualifying, the fact that Kavanaugh has no obvious source for that kind of cash smells odd, according to the Washington Post reporting, as well as Mother Jones, unless he is willing to disclose how he paid for this.  The fact that he chooses to associate with such a rarefied crowd makes him suspect of siding with the haves over the have-nots.  As Leviticus 19:15 says “You shall do no unrighteousness in judgment, you shall not respect the person of the poor nor honor the person of the mighty, but in righteousness you shall judge the people.”  Similar statements are in Leviticus 24:22 and Deut 16:19.

Perjury under oath – We all know that “you shall not bear false witness”(Exodus 20:13; Deut 5:17) is one of the Ten Commandments and there are many  other Biblical injunctions against lying, like “you shall not lie to one another”(Leviticus 19:11).  Kavanaugh has been accused by Democrats of lying under oath in 2004 and 2006 when he testified about his role in the Bush White House and what he did and did not know about nominees.  In fact, Russ Feingold, a former Democratic Senator laid out the evidence for Kavanaugh’s lies in the Huffington Post and suggested that Kavanaugh’s nomination be withdrawn on that basis.  A law professor has argued that Kavanaugh could be impeached for these offenses.

Alcoholism – In Kavanaugh’s high school yearbook he is listed as treasurer  of the “Keg City club – 100 Kegs or bust!” and he has spoken of excessive binge drinking in his time at Yale Law School in a speech to the Federalist society at his alma mater in  April 2014.  He also belonged to an undergraduate fraternity at Yale known for drinking and sexual assault.  While alcoholism is not in itself a disqualification, this kind of excess is not looked favorably upon to say the least, in Jewish tradition.  The sons of Aaron, Nadav and Avihu are put to death in Leviticus 10:1-2 for bringing “strange fire” before the Lord.  While the nature of the “alien fire” is unclear, later in the chapter is a prohibition against priests drinking (Leviticus 10:8-11) which leads many commentators to make the connection between Nadav and Avihu’s behavior and the effects of inebriation.  These self-reported statements of Kavanaugh’s excess should make all who may depend on his future judgment concerned.

Judging solely on appearances.  Both the Guardian and the Huffington Post ran stories about Kavanaugh choosing his female law clerks on the basis of their looks; he only wanted ones who looked like models.   Deuteronomy 1:17 says clearly, “Do not discriminate persons in judgment, you shall hear the great as well as the tiny; do not be afraid of the face of any man for judgment is God’s.”  While this verse is concerned with litigants,  choosing employees is a type of judging; selecting a person to do a job that has nothing to do with appearance and basing choices solely on appearance is not consistent with being impartial.

There are additional verses that show the unfitness of  a judge concerned only with physical beauty in women:  One of the qualifications set up for the first judges to assist Moses is that they should be “God-fearing men, men of truth.”(Exodus 18: 21) If one judges only by appearances, clearly truth is not one’s first consideration.   A judge should not take a bribe, we are told in Exodus 23:8, since “a bribe perverts the wise and perverts the words of the righteous.”  Paying attention only to physical beauty, in my mind, is the equivalent of a bribe.

The assault.  First, as Harvard Law professor Lawrence Tribe wrote on Twitter, MSNBC correspondent Rachel Maddow ” just asked the killer question: If you’d made up a high-stakes lie about a Supreme Court nominee, would you do all in your power to get the FBI to investigate your claim? Knowing that lying to the media isn’t a crime but lying to the FBI is punishable by years in prison?”  Since Dr. Christine Blasey has already received death threats and is in hiding with her family, there is no reason to think she would create the accusation from whole cloth as she does not stand to personally benefit from this accusation.

A psychiatrist who is an expert at trauma and memory says that these kinds of events are generally remembered even after time because of the role of norepinephrine, a stress hormone that has a role in creating memories connected with emotion.  Though I find all of Dr. Blasey’s accusations credible, the detail in the story that rings true to life is that, as a 15 year old, she was most worried about her parents finding out that she had been to a party where people were drinking.  That is how 15 year olds think, in my experience as former teen and parent of teens.

If he did do it, the problem with him, not just as a person but as a future judge, is that he is not willing to view his female peers as people with desires and voices of their own.  An attacker of this kind is acting in a way, to silence and objectify another human, that is unacceptable in any society.  Seventeen-year-olds should know how to behave decently – as most do – and if they don’t, they should not be rewarded with the privilege of high office at any age.

Finally, according to the medieval legal authority Moses Maimonides, “A judge must show patience, indulgence, humility, and respect for persons when sitting in court (Yad, Sanh. 25:1).”  There are a number of ways that what we have learned about Kavanaugh show he lacks the quality of respect for persons, including membership in an undergraduate fraternity known for its demeaning and disrespectful attitude towards women, seen as “notorious” according to  a recent Yale Daily News piece.  In fact, a number of members of this fraternity have allegations of sexual assault against them and the organization was banned from Yale in 2011 for five years.

I’ve discussed here Jewish notions of qualifications for judgment.  However, there is a Jewish idea that there are seven laws that are established as a baseline of marking morality in a society of humans, Jews and non-Jews alike.  These include the obvious types of laws like not murdering or stealing, as well as  less obvious like not eating a limb of a living animal.  The first one on the list?  Creating a legal system, as the Babylonian Talmud enumerates in Sanhedrin 56a.

If we are to live in a society attempting to display even a smidgen of morality, we must have judges who are qualified to act appropriately.  Nothing we have seen of Kavanaugh so far suggests that he holds qualifications for his current position,  much less that of the highest court of the land.