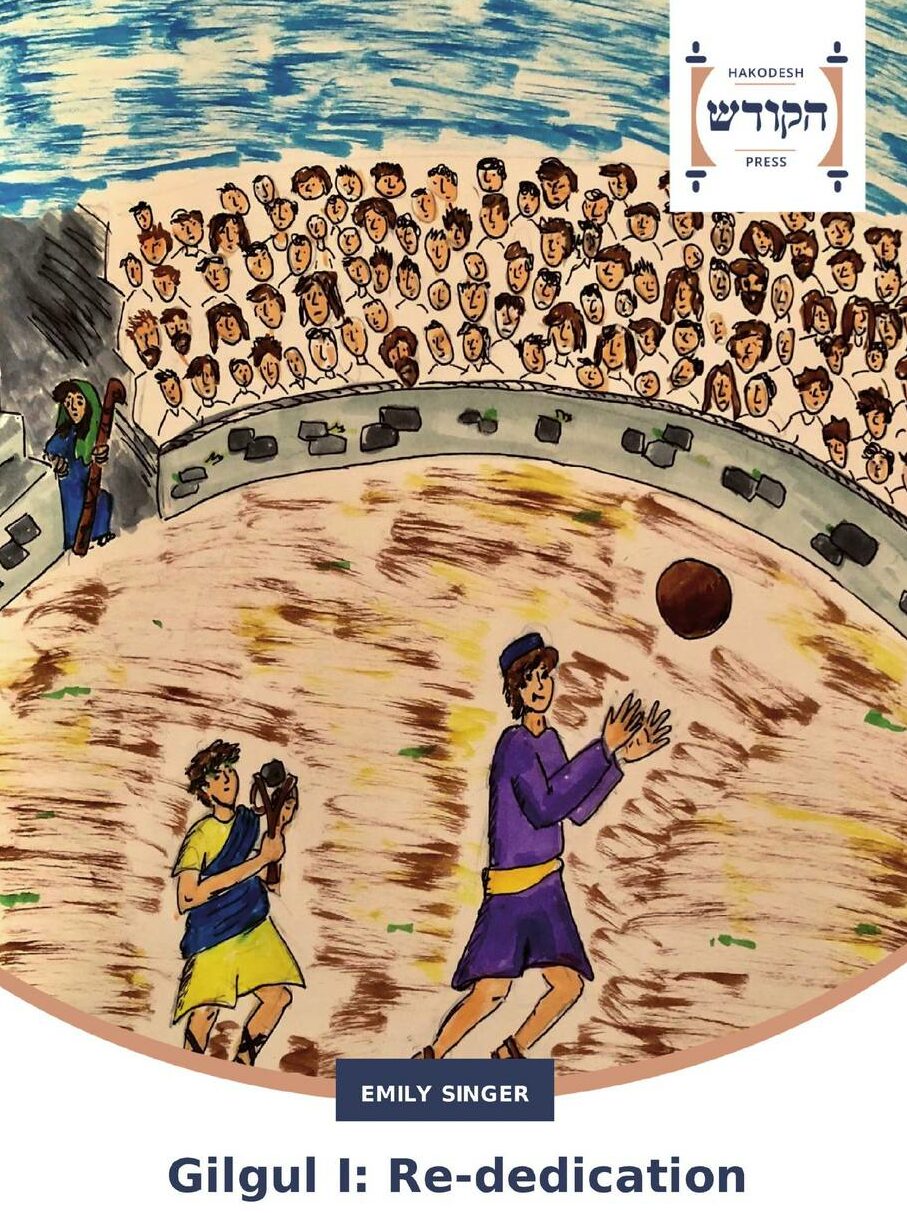 Emily Singer is the author of a new book — one receiving good attention in many quarters, including a warm review in a recent edition of the Jerusalem Post. The book is called Gilgul, and while it’s intended for middle-school-age readers, and would make a great Hanukkah gift for same, it carries a message we could all use — one combining great pride in ethnic/national/religious identity and genuinely embracing the idea that each particularity must connect with something larger than itself.

I had the opportunity to “sit down” with Emily, despite the thousands of miles that separate us — she is in Israel and I am in NYC — and this is what emerged. Enjoy!

Rabbi Brad Hirschfield (BH): Let’s start with the title of your book, Gilgul. Please explain that word, and why you chose to title your book accordingly.

Emily Singer (ES): Gilgul is loosely based on the Kabbalistic concept of Gilgul Neshamot, in which souls of the deceased return in future generations in order to “fix” flawed character traits that need perfecting. I love the idea that we are all a work in progress, always striving to improve, and that change happens slowly over time because it does. In the book, the emphasis is not on the individual, but on society. The main characters are “returned” to pivotal times in Jewish history in order to save the Jewish people and to move the world towards peace.

BH: From the very beginning, this is a book about kids and their parents/family, a book about identity in general and Jewish identity in particular, and a book about a pretty remarkable time in history. How are those three related for you, and how would you like your readers to understand the connections between those three things?

ES: I think we are living in a very confusing time in terms of identity in general and Jewish identity in particular. Assimilation is skyrocketing, as religion in general and in the Jewish community are becoming more and more extreme. I wanted to offer a character who is steeped in a rich, Jewish tradition, proud of his family, and generally respectful of his faith while sporting a healthy, relatable teenage cynicism. Equally important to me was for him to interact with kids from other traditions, to see that everyone has value and that when people from different backgrounds get to know each other and work together, real peace is possible. Of course, kids are able to see this better than adults, before all of their preconceived notions set in. In Gilgul, the kids are ready. It’s the adults who need work.

BH: You take us back in time — more than 2,000 years — and as richly as you detail that ancient world, it feels very familiar. Do you think things really change from one era to the next, or as Ecclesiastes teaches, is “there nothing new under the sun”?

ES: History definitely repeats itself. I’m sad to say that it wasn’t difficult for me to imagine how the world could have gotten itself into a religious or territorial war. Been there, done that. But I am by nature an optimistic person. I believe the most compelling message of the Torah is that God wants us to join him in bringing redemption by making the world a better place. Whether it’s Abraham fighting with God to save the people of Sodom or Moses leading the Jews out of Egypt, I’d like to think we improve as a nation and as a world over time. We’ve virtually eradicated slavery, we’ve developed strong institutions for helping the poor and downtrodden. There’s still a lot of work to be done, but I believe it all starts with attitude. That’s why I wanted to offer role models in the form of kids who just want to play ball but suddenly discover that the world needs them for bigger things, and they rise heroically to the occasion.

BH: Gilgul unfolds around the story of Hanukkah. What does Hanukkah mean to you, and how do you celebrate it with your family?

ES: I grew up as a secular Jew in New Jersey. We would light Hanukkah candles and exchange presents so we wouldn’t be jealous of our Christian neighbors. I was virtually the only Jew in my school, and I would go from class to class telling the story of Hanukkah to the other kids and giving out dreidels and chocolate coins. My mom says that once at the mall I sat on Santa’s lap and told him the story of Hanukkah. Now that I live in Israel, everyone knows the story of Hanukkah. It’s not about presents, but about history, identity, and pride. The small and weak defeat the mighty, miracles happen, and small acts change the world. And deep-fried foods — that’s international.

BH: Your book unfolds in a time of conflict and war — and without any spoilers, you sent some of your most beloved characters into that war. You have also sent your own kids into the army in Israel. How does the latter reality shape how you write about the former? How does it shape the ways in which you celebrate the military aspects of the Hanukkah story?

ES: Knowing our kids would join the army was definitely one of the more difficult parts of making Aliyah. I hate war and I feel like our country, and most countries could do a lot more to prevent it. That being said, I respect and appreciate that Israel has a citizens’ army.  Everyone does their part to keep us all safe. The school my kids attend/ed (and where I teach) boasts one of the country’s highest rates of combat soldiers in the country. It’s not because the students want to fight, but rather a kibbutz mentality that if someone needs to go to war and endanger themselves, why shouldn’t it be me? It’s beyond terrifying, but the result is a society of people with a strong sense of responsibility towards others. In the story, I am critical of the military extremism of the Maccabees, and play up the skepticism and queasiness of our hero David, who can’t shoot an arrow at an enemy soldier. But the critique of the Maccabees wasn’t my innovation. It’s right there in the Talmud.

BH: Playing games — one game, in particular, Skyros — is never far from the story. Why are games and game-playing important?

ES: I got the idea for the series when I saw my kids devouring Rick Riordan’s Percy Jackson books. At one point, my 6th grader took “Bulfinch’s Mythology” off my shelf and read it cover to cover. I thought to myself if there were an adventure series based on Jewish “mythology,” would he be reaching for a Bible or a Talmud? So I thought, what could get my kids to open the book? — Football! (or something like it). Kids relate to games. And through playing games, kids learn about competition and fairness. In a game, there are rules that must be followed. In the book, David loves playing Skyros in the park. When he’s forcibly recruited for the Greek Games, which are by definition unfair and even dangerous, the line between game and life blurs, and he finds himself in the epicenter of the political conflict.

BH: You help us see that back then, as now, there were many ways to think about “what God wants” and/or how to be Jewish. Why is that important to know — especially for kids and for their parents?

ES: I don’t suppose any of us knows definitively what God wants or how to be Jewish. My understanding of the Torah and the world around me is that God seems to want us to work towards perfecting the world — eradicating slavery and poverty, respecting and helping the stranger, striving for holiness and peace. These are recurring themes in our history and traditions. I want to invite my readers to share my vision by providing role models that will inspire kids to love Judaism, to be kind and help others, to get to know “strangers,” and to pursue peace.

BH: Toward the end of the book, David asks, “Who will help us build the new land?” And the answer he receives is, “You will build it, then it will be destroyed, and you’ll build it again. Redemption is not for one man or woman, nor for one generation”. What does that mean for you?

ES: Sometimes we look around and it feels like there’s no hope. We could just lie down in the rubble and give up. But if we believe that we can make a difference, and if we strive for it, then we can believe that others will too. The journey is not just about the destination but about the process of getting there. When I was in ninth grade, my choir drove from Boston to Disney World to perform. Twenty-two hours on a bus. I slept on the floor and woke up with a splitting headache to someone stretching his legs right into my head. It should have been unbearable. But we were going to Disney World! If we know where we’re going, we can deal with many hardships along the way. And if we know we’re getting closer — maybe we won’t get there but our children will, or their children — then it’s worth it!

BH: Writers are often changed by the writing.  What, if anything, has shifted or changed for you, through the writing of Gilgul?

ES: I don’t know if anything has changed for me in terms of how I feel about Judaism or war or anything like that, but it was hard for me to write the war scenes. I cried as the old man died in David’s arms. And at the end when… no wait, no spoilers.  But war is horrible. I don’t want my kids there, or anyone’s kids. In my professional life, I try to foster tolerance and peace by participating in programs that bring my students together with kids from Arab schools and other populations around the world (through pen pals and Zoom meetings). I think it’s so important for kids from different backgrounds to get to know each other, to know that they are more the same than different and that all the fighting is stupid.

BH: What did I not ask you, but you wish I had?

ES: I was hoping you’d ask, “Why Emily, where can I purchase hundreds of copies of your book for all of my family and friends?” I would have answered that it’s available online through Amazon or The Book Depository and that a signed copy is available at my home on Kibbutz Maale Gilboa. You also didn’t ask about the sequel, when our heroes are reincarnated into the times of the Mishnah (around 150 CE) as children of famous Jewish historical figures, Rabbi Meir and Elisha ben Abuya, among others. I’m still working on getting it published, so not much to tell there just yet, but stay tuned!