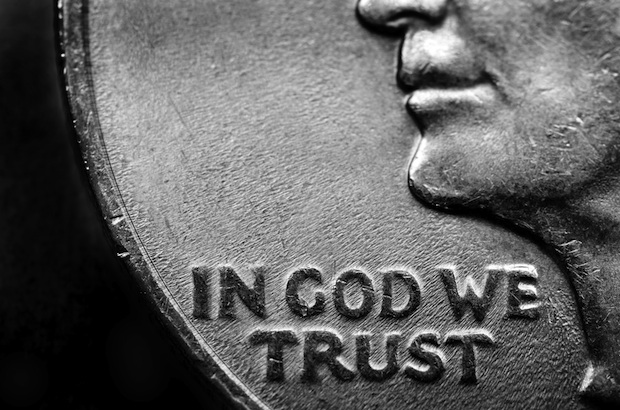 Following months of effort culminating in hours of very heated debate, Washington state’s Pierce County Council voted to display the national motto “In God We Trust” in its chambers. And you know what? I think that’s fantastic. It’s fantastic, but it’s also incomplete.

Why shouldn’t a county council display our national motto, especially as we are overwhelmingly a nation of believers? It’s not as if it violates any church-state issues, to which we should always be attentive, as no one church is being touted over any other. And however often radical secularists or atheists claim otherwise, the constitution guarantees freedom of religion, including the freedom to have no religion, not freedom from religion in all areas of public life.

Of course, it’s that “freedom to have no religion” part that makes me say that the folks in Pierce county only got part of the job done. While they struck a blow for believers, they missed an opportunity to strike an equally powerful blow for the non-believers – one which in this case, would have been so easy to do. Not to mention every bit as important.

While true that Congress adopted “In God We Trust” as an official national motto in 1956 – no doubt as part of the ongoing “cold war” against the “godless communists – they did not do so at the expense of a far older motto, one dating back to 1782 and one which appears on the seal of our nation: E Pluribus Unum, Latin for, “Out of many, one”. Could one ask for a more powerful or beautiful sentence celebrating our national history and commitment to creating unity without demanding uniformity?

Most of our nation’s “we”, trusts in God, but not all, and we are at our very best when our acknowledgment of the majority view doesn’t crowd out the equally beautiful minority views. In fact, that ability may be what makes us great in all parts of life, but for now, I look forward to seeing it acknowledged in Pierce County, WA.