In Breaking A Vow To Never Dye My Hair, Did I Go To The “Dark Side”? 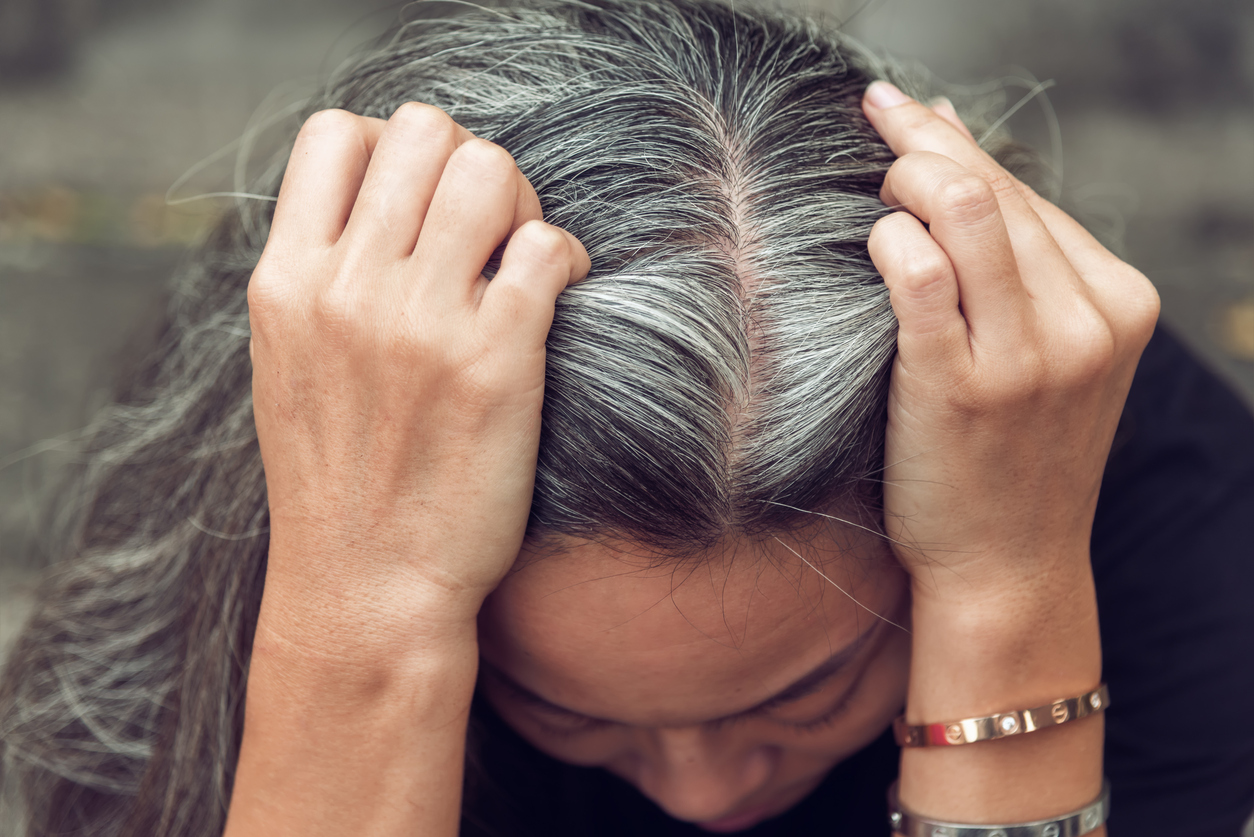 Growing up in the 1970s and 1980s, I silently vowed to never dye my hair. That women became less desirable if not invisible when they aged, whereas white-haired men received praise for looking distinguished, made my blood boil. I didn’t want to reinforce this double standard. When my mother colored her hair while in her 40s, neither I nor my wild-maned Hungarian father cared for it. As her silver strands grew in, they suited her beautifully. Later, my parents divorced. After my father began dating, he lamented that many women tinted their hair.

“It’s as if they are hiding something,” he said of their dark roots. I took note.

My first grey strands appeared in my mid-20s, scattered like strips of tinsel. After product-pushing hairdressers suggested I color them, I learned to insist, “Just a haircut,” to bypass the sales pitch. The grey grew stealthily, often imperceptibly. The white strands remained close to my skull, largely invisible on days when I felt energetic and happy; they poked out like antennae when I experienced fatigue. Amused by my hair’s behavior, I left it alone.

In my early 40s, women occasionally complimented me on my increasingly silvery hair and my courage, too, for not succumbing to color. Those moments made me feel like a warrior on the front lines of the battle against sexism, ageism and the beauty-industrial complex, which gorged on female insecurity. They also reinforced my conservative coiffures and, perhaps, my apathy. Aside from shampooing and applying conditioner, I didn’t mousse, gel, or spray my hair. I rarely used a blowdryer.

Still, I envied and admired women who tried new styles and boldly switched up their looks, as if they were both artist and canvas. Their experiments with self-expression hinted at a flexibility around their self-image, something I lacked. It’s as if long ago I had decided who I would be, and what I would or would not do. While I presented myself as self-assured, I wondered if the opposite were true: out of fear of making a mistake, had I become terrified of changing my hair, as if it represented my identity?

That I gave my hair so much power yet, simultaneously, ignored it, eventually struck me as bizarre. I took a chance at a trendy salon in Denver, where I lived for several years. There, a tattooed 20-something stylist fell in love with my locks. She affectionately ran her fingers through my wavy curls. That she took such pleasure in my hair made me wonder why I did not or, worse, why I could not. For years I believed I had more important things to do with my time, but perhaps I just did not like myself enough to treat my hair with tenderness. I suspected it might be more the latter than the former. I’d never considered that my hair could be a source of private pleasure, rather than part of my persona or a tool of seduction.

This young woman did such a lovely job that I asked her how I might recreate her work. She suggested I buy a comb with extra large teeth, a diffuser for my hair dryer, a round brush, and some curl cream to hold the waves. I drove a few blocks to a Sally’s Beauty Supply in a strip mall. Entering the store felt like stepping into a foreign city, minus a map and phrase book. Lacking proficiency,  let alone fluency in this realm of female identity, I sheepishly asked for help. A red-aproned employee guided me through the store as I filled a shopping basket. While I loved the comb, I used the other things a handful of times before I lost interest.

It’s as if my grooming habits had been permanently inked in black and white, as my hair was quickly becoming. Except the grey no longer glittered but loitered like an unruly gang near my face. Various people suggested I color it to complement my skin. While I didn’t want to abandon my youthful principles, the disconnect between my hair and the rest of me began to widen. The person I saw in the mirror didn’t reflect how I felt.

What if dyeing my hair would reveal my authentic self, rather than conceal it?

I wouldn’t know unless I tried. To lower the stakes, I adopted an attitude of playfulness instead of perfectionism. Armed with a Groupon, I made an appointment with a well-reviewed hair studio. Over the phone, the Italian-born owner reassured me that he didn’t hop back and forth among clients and would give me his full attention.

When I showed up, we explored options. I knew what I didn’t want, which was to look as if my hair had been dipped in dye. He boasted of his decades of expertise and said he’d leave some of the grey alone. Thanks to his talent for color matching, he said, it would look so natural no one would be able to tell. Since I prefer baby steps to dramatic makeovers, I agreed. I could refine it later.

As he brushed dye onto my hair, flirtations gushed from his lips. He regaled me with stories: he’d sent one woman flowers each day for months to woo her. He’d spent thousands on trips to Europe, just to escape with a lover for a few days. He hinted at the power of a night of physical bliss. He suggested that he and I go for coffee… in Italy! As he tried charming the pants off me, I recalled my much younger, darker-haired self. In a vulnerable moment I’d fallen in love with the idea of going on an Italian adventure, even though I hadn’t been in love with the man who suggested the trip. That romantic-sounding vacation had turned into a nightmare.

The hairdresser’s amorous attention, while not offensive, distracted me from noticing that he hadn’t left any of the grey alone. He’d dyed every strand. Perhaps he’d chosen efficiency over meticulousness because I hadn’t played along with his banter. He cut my hair quickly, too. Before leaving, I handed him the printed Groupon. He gave me his business card.

“Call me if you want to come back and have me cut it shorter,” he said. “I won’t charge you for it. I want you to be satisfied.”

I placed his card in my purse. The hair cut had not turned out great. Returning would have been less great. Later that day, I studied myself in a mirror. The person staring back appeared younger but wasn’t exactly me. Whoever it was looked like many other women who color their hair. Because in my mind I had made “much ado” about my hairdo, I assumed the change would be obvious. But, as the stylist predicted, no one noticed or said anything. Strangely, Groupon sent me reminders to redeem the voucher, suggesting the salon had not requested payment. The odd episode echoed the Zen koan: “If a tree falls in the forest, and there is no one there to hear it, does it make a sound?”

In the end, breaking an old vow, even under the radar, came as a relief. By doing once what millions of other women do regularly, for whatever reason, dissolved a subtle barrier I’d erected between myself and my gender. Perhaps I could identify other unspoken vows, even seemingly trivial ones and, in the Jewish tradition of the New Year, release myself from the shackles of “never”. When my grey roots reappeared, it surprised me how glad I was to see them. Whether I choose to darken them again, dye my hair purple, or let nature take its course, is not the point. The point is to be a friend to myself, no matter what I decide.