I Am an Orthodox Rabbi Who Doesn’t Perform Gay Marriages, But I Celebrate Supreme Court Decision 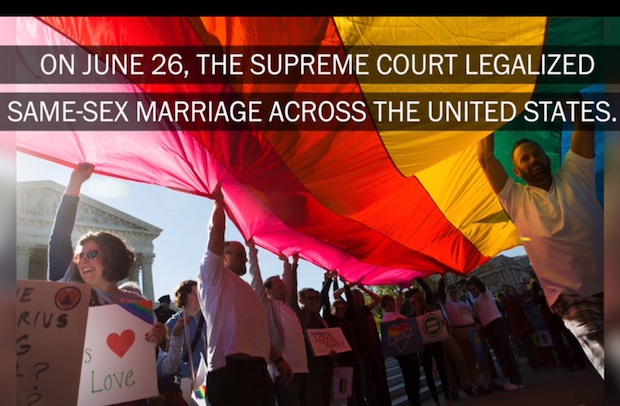 This opinion piece appeared on washingtonpost.com on June 26, 2015. The Supreme Court made history on Friday, that much is clear. What may be less clear, especially for those who do not support same-sex marriage, is that the 5-to-4 majority opinion written by Justice Anthony Kennedy, merits celebration even by those who don’t agree with the conclusion reached. And to be totally transparent, I write those words as an Orthodox rabbi who does not officiate at same-sex marriages.

So why am I celebrating today? Didn’t my side lose? Didn’t the court strike a blow against God? Isn’t this just one more way to tyrannize social and religious conservatives? Isn’t this yet one more way in which marriage is trivialized and degraded? No, no, no and no.

I celebrate today because in fact, the opposite of all of those was accomplished today. My “side” did not lose, because my side is never defined by any one position on a matter of ritual or liturgy, no matter how important that matter may be.

My side, I hope, is God’s side, and the God in whom I believe is infinite — bigger and more complex than can be reduced to any single decision, or even any single tradition, for that matter.

My side is the side of believing in God’s laws and in upholding genuine humility regarding the interpretation of them. The law, as I understand it, is absolutely binding, but nobody but God alone can have an absolute understanding of that law. So no, my “side” did not lose today at all.

In fact, to read Justice Kennedy’s words is to read a celebration of marriage in deeply conservative terms, in all but the choice of partner. In a nation where fewer and fewer people are choosing to marry, and choosing to marry much later when they make the choice at all, today’s decision defends traditional marriage, at least as much as it redefines it.

The irony today is that the communities most often opposed to same-sex marriage are also often those most committed to marriage altogether, and so today must choose to see the cup as half empty or half full. Of course, it is always both, and I hope that those most upset by today’s decision will see that, and not only what they feel is the empty half.

But more than the notion of marriage was defended today. The most fundamental rights of conscience and religion were defended with today’s Supreme Court decision, no matter how much the leadership of some religious communities claim otherwise.

The right of gay couples to marry, regardless of how some others define marriage, is no more sacred than the right of those people to be free from performing or recognizing such ceremonies within their religious tenets. So again, the fear-mongering of some notwithstanding, and with respect for their deep disagreement with the court’s conclusion, those who most oppose gay marriage — for whom the term itself is an oxymoron — should at least take heart in knowing that their position is no less protected.

People can, will, and perhaps should, disagree about when, how and if, to fully integrate gay marriage into their particular communities and personal opinions. But as a nation committed to personal dignity, the sacredness of committed relationships, freedom of religion and the importance of equal protection under the law for all, we have much to celebrate, and I do so with a clear head and a full heart.