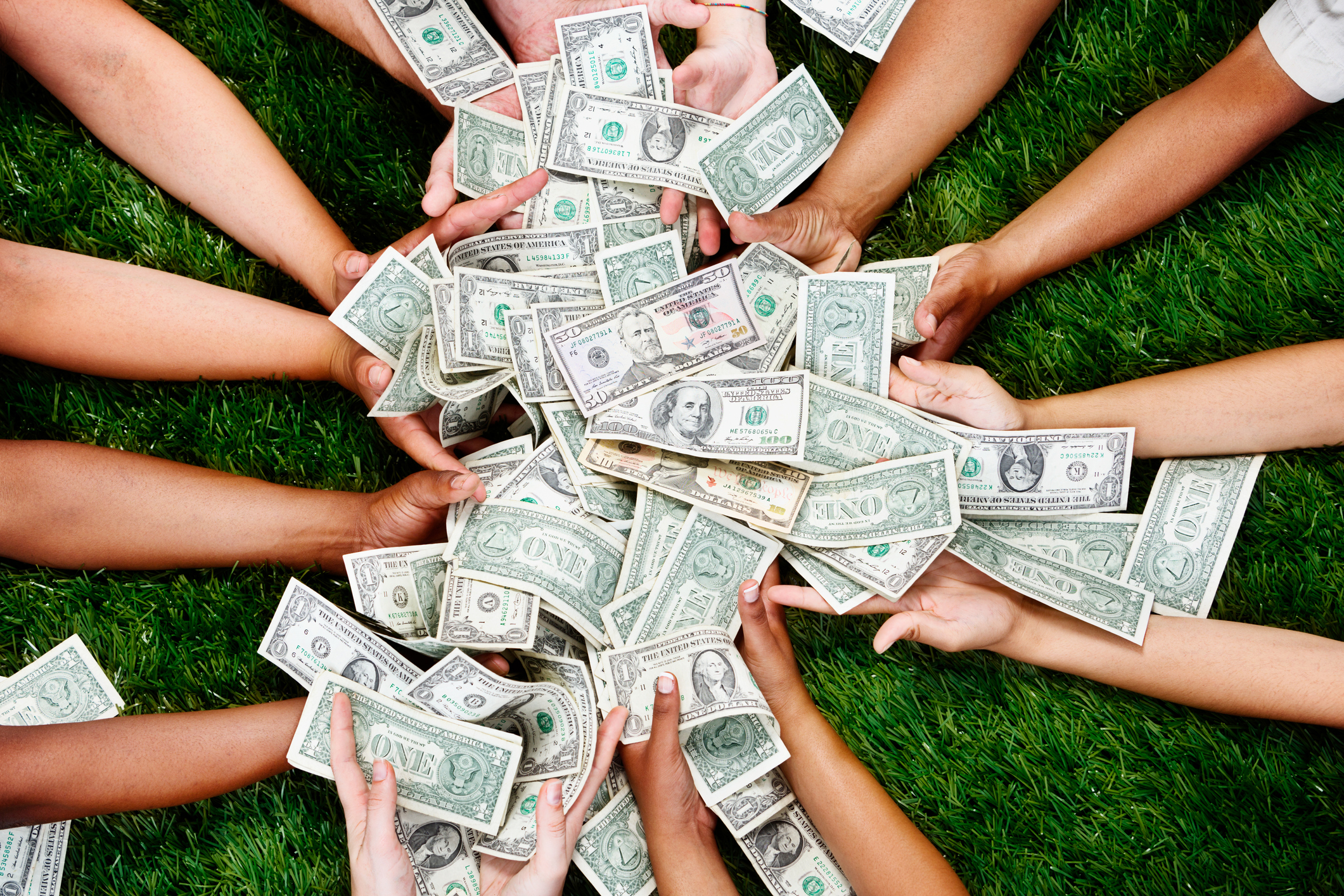 I have a confession to make.

I want to make money.

Lately, in fact, I’ve been praying for money.

Asking with all my heart to ease my former constrictions around stepping into abundant flow.

To amend the belief, carried over a long line of generations, that living a conscious life isn’t in line with being financially secure.

I’m learning to work with money as a tool. It is the primary energetic exchange in the world that I live in. It’s a means to be recognized and valued for the good work I do, and a way to pay that recognition and value forward to others who provide me with the same.

“Money is energy”, is the oft-recited adage in a world of spiritual discourse. But, for many who have seen the dark underbelly of capitalism, it’s hard to reconcile. We see the world of dog-eat-dog, of people hurting others just to get ahead and earn more – and for what? To spend less time with their kids? To have a fancier house we never visit in favor of the office? For a shinier, sleeker device traded in each year and piling up in landfills, for a vacation where half the time is spent  lining up the perfect Instagram shot?

I wanted out, and, two years ago, when I left the treadmill of Madison Ave and advertising I breathed a sigh of relief. No more lying to clients across the table. No more spending hours on work that would ultimately prove meaningless, strategizing for clients with no revenue model. No more clocking hours in a dark office, drinking away my life to get the CEO rich, while I scrambled for change to get a taxi home the day before payday. I was constantly in pursuit of money, but still never had enough. I was done.

But I’ve been learning the hard way. Freelance life does that to you. I’ve worked for companies that went bust with 75% of my fee still owed. I’ve worked for Wall Street companies that put money before people and had me feeling dismissed. And I’ve spent too many hours forwarding invoices late at night pushing to get the rent paid.

There’s gotta be another way.

Surely these old ways aren’t serving us any more. With years of working to improve mentally, emotionally and spiritually, I’m wondering how to shift these blocks.

Money is good, I repeat to myself. The more I have, the more I can do good. To take care of myself so I’m not a burden, begging for work exchanges or subsidies. To spread generosity to people I love, paying for a meal here, a taxi there, donating to all the Kickstarters that come my way.

In my prayer, I’m reminded of a Hasidic story told of a hasid (devotee) who is shunned by his Rebbe (shamanic, guru-type Rabbi) on his periodic visit to his Eastern-European hamlet one holiday.

“I won’t see Reb Yankel until he provides me with a thousand ruble donation,” the Rebbe tells his gatekeepers, and the student is devastated. He’s never been rich before, and hasn’t had a problem with it – he just lived his life. But now the need has arisen – what can he do, but ask for riches? And so, he prays. He prays like never before, and after months of prayer, a business deal turns in the right direction.

A year later on the Rebbe’s next visit, he presses a 2,000 ruble donation into the Rebbe’s hand, and is informed by his wise mentor: “There was knowledge in the heavenly realms that money was destined to come your way. It had your name on it, but there was no way you could call it into this world. You had to ask for it.”

But beyond prayer, which is of course helpful, I’ve been searching for a deeper, more real solution, one that not only works to understand financial security as a blessing, but to reinvent how we earn that money. How can our roles in the workplace shift to be doing good, not only with the ultimate goal of our work, but in how we approach it? In the way I’ve begun to approach life, can I be collaborative, rather than combative? Communicative, instead of passive aggressive? Expansive, not ridden in fear? Proactive instead of reactive, and creative instead of suppressed?

It turns out I’m not the only one asking this question in today’s world. It’s time for a shift, and it turns out there are people doing it – like “The New Entrepreneurz“, Israeli gamemakers – and changemakers! – Ronen Gafni and Simcha Glueck, who run a corporate training company known as “Freshbiz“. In a world where children grow up playing Monopoly, says Ronen in a recently presented TedX Talk in Jaffa, how is it possible for us to succeed at business when the only model we are trained in teaches us to put everybody else out of business?

Like the smell of sunscreen before going to the beach or the sound of fingernails on a blackboard in school, the programming of Monopoly goes deep within me. It reminds me of the injustices I felt when nothing could go my way, no matter how hard I worked – a not unfamiliar pattern in my own work life. When we played Monopoly as kids, it was over when someone threw the board across the room, and when I diligently played with a sister or cousin, we would sweetly count up all the money at the end and see who had more – that’s who won.

At age 17, I traveled overseas and played with a friend’s husband, a lawyer, whose shark-like tactics had us all bankrupt within an hour. It was my first experience playing Monopoly the real way – and I was indignant. “Running up the rents so nobody can pay, then confiscating all their property, is NOT the way for society to be!” I cried, but he was laughing. These were the real rules of the game, the way you could win, he emphasized, and I had to toughen up.

In subsequent years, one of my first bosses trained me in his personal school of business with the adage, “f##k  ’em”, referring to any customers, suppliers or even fellow employees who I expressed might have some personal concerns about the deal we were proposing, based on logic, not empathy. Of course, I still went home and cried at night thinking of the factory workers in China I was playing a part in exploiting, but there wasn’t much I could do. I was an employee – and a mediocre-salaried one, at that – and this was business.

Years later, I’ve taken it to the other extreme, and that hasn’t always worked for me either. I’m a freelance writer, marketer and strategist, with more of a desire to make an impact on the world than screw over people for cash – but they don’t take gratitude checks to pay the rent. I need to be abundant in my life. I’m choosing to be a writer, educator and spiritual leader, I want to put energy into creating new paradigms for personal development – but it’s important that I earn the money I need to live and build a better world.

The philosophy of Freshbiz is different, but not new to conscious corporate America. Everybody knows work is better when we collaborate, co-create and communicate, but it’s few who have actually figured out how to get that done in the workplace. In Ronen’s TedX Talk, he reminds us that our childhood programming from game playing goes deep – and perhaps it’s the game playing now that can reverse those effects. (Freshbiz is an actual game used to train corporations in precisely these tactics).

He describes how the world we live in today is one where businesses should be succeeding more, not failing at their current rate: With collaborative mechanisms in place, thanks to digital communication technology; new needs rising from new markets and better analytics to determine those needs and communicate them, we should be transforming the world – not fighting one another for every crust!

I’ve worked in spaces that recognize creativity before, and allow us to head to the ping-pong table where we might alight on that idea that eludes us at our desk. I’ve also been at the workplace where even five minutes in the kitchen getting coffee raises eyebrows among the staff. Reading “The New Entrepreneurz”, the wise words of Freshbiz’ leadership team, is a reminder that it doesn’t have to be that way.

Forget win-win: the new game is about “win to the winth power”, amplifying the benefits in all the options so that by collaborating, we widen the entire pie. Rather than competing for the same resources, getting over our ego’s desire to have “more more more” we can use the sharing economy to access what we need instead of owning them. As colleagues, employers and partners, we can use empathy, honesty and real-life human emotions to communicate instead of falling into the twisty knots that many shady business deals do.

And finally, we are all equipped with many riches, less quantifiable than money, but equally powerful and packed with potential. They’re called Action Cards, and we can choose to play them at any time. From a skill that can be exchanged for a product; to an unused space that can be dedicated to a consciousness-raising activity; to sweat that can be input to build an organization just as crucially as capital: Our Action Cards are always there, ready to be played.

We’ve been living in a world of hierarchy, where everyone had their place in a symbiotic ecosystem that had patrons and priests, jesters and beggers, captains and kings. We’re moving into a new world, one of abundance and goodness for all, if only we can learn to share the bounty that’s there for everybody instead of hoarding in an old paradigm of scarcity. Can we redesign our business strategies in order to Win to the Winth power? Can we see our Action Cards as the building blocks of a new society? Will we learn to communicate with honesty, empathy and compassion to breed true strength and sustainability in our organizations?

And will we finally stop scrabbling for the last cookie on the plate and instead bake a fresh new batch for everyone?

Rishe Groner is playing her Action Card and currently available for hire as a Jewish educator, speaker, freelance writer or marketing strategist. Visit www.thegene-sis.com for more.