How Primo Levi Taught Me To Tell A Story 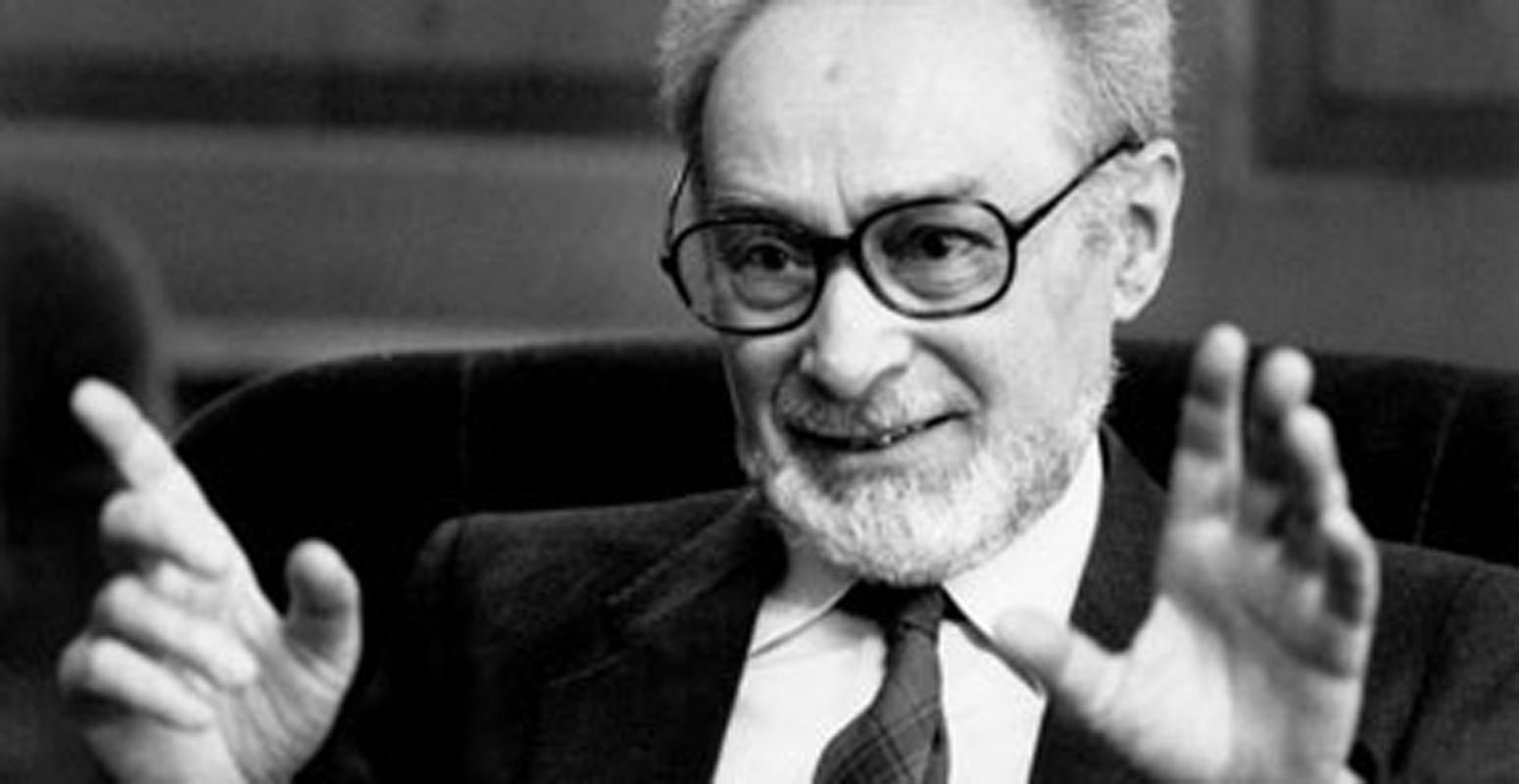 “We must be listened to: above and beyond our personal experience, we have collectively witnessed a fundamental unexpected event, fundamental precisely because unexpected, not foreseen by anyone… It happened, therefore it can happen again: this is the core of what we have to say. It can happen, and it can happen everywhere.” — Primo Levi, The Drowned and the Saved, Vintage; New York, 1989. pg. 199.

Growing up in Hebrew School, the Holocaust was confined to a unit of history.  I knew my grandmother had survived Auschwitz. I eventually learned that many other heroes had survived the same atrocities.  I read works of Victor Frankl, Anne Frank – I even played her in two theatre productions.  I never asked my grandmother directly about her experiences in Auschwitz. How could you?

But the text that truly stirred me was an interview I read with Primo Levi.  He was the first person I had heard who didn’t just stop at saying there was no way to explain the atrocities that had occurred. Levi showed me why:

“Perhaps one cannot–what is more, one must not–understand what happened, because to understand is almost to justify. Let me explain. Understanding a proposal or a form of human behavior means containing it, containing its author, putting oneself in his place, identifying with him. No normal human being will ever be able to identify with Hitler, Himmler, Goebbels, Eichmann, and the endless others. This dismays us, but at the same time it provides a sense of relief, because perhaps it is desirable that their words and their deeds cannot be comprehensible to us. They are nonhuman words and deeds, really counter-human, without historic precedents, difficult to compare even with the cruelest events of the biological struggle for existence.”

Okay, I thought to myself. That makes sense. But then…what is our job now? What do we do about that?  Do we shrug our shoulders, cross our fingers, accept these terms and hope for the best?  This felt like a rhetorical question…yet I wasn’t sure of what to do.

“There is no rationality in the Nazi hatred. It is a hate that is not in us; it is outside man. If understanding is impossible, however, knowledge is imperative, because what happened could happen again. Conscience can be seduced and obscured again: even our consciences.”

The more I read of Primo Levi, the more I realized how important it was to be curious.  Not only to tell stories, but to ask questions.

“It is the duty of everyone to meditate on what happened. Everybody must know, or remember, that Hitler and Mussolini, when they spoke in public, were believed, applauded, admired, adored like gods.  And we must remember that their faithful followers, among them the diligent executors of inhuman orders, were not born torturers, were not (with a few exceptions) monsters: they were ordinary men. Monsters exist, but they are too few in number to be truly dangerous; more dangerous are the common men, the functionaries ready to believe and to act without asking questions.”

In school, I was always the one who asked questions – long after the bell would ring.  In my TEDx Talk, I coined the term “Dey=tourist” as someone who has a “detour” in life, as in…rather than getting discouraged that plans may be derailed, a Detourists stays curious to where the path may lead and asks questions rather than make assumptions. In asking questions, we are able to come up with creative answers.  These “answers” are the solutions we create for ourselves.  By asking questions, we have the power to use our answers in order to re-imagine a better, brighter future.  That is the power of curiosity – the stamina to relentlessly examine, scrutinize, and ask questions is what allows us to live out new stories.  It stops history from repeating itself.

What is the power of a story?  We tell the stories of those before us to teach the world what we can learn from history.  Never again, we say, as we share the words, memories and images of Auschwitz, of our people, of our legacy.  We tell a history because it is the story of the world, of our world.

The Latin roots of the word “compassion” mean “to suffer with.”  By sharing these stories of how our ancestors suffered, we create a compassionate world full of empathy and awareness. Compassion is a spiritual, proactive state that joins us all in suffering, create understanding, and ultimately, peace. It is a response from the terrible misfortunes of others.  We tell these stories of the Holocaust to honor, not only those we’ve lost, but for life itself.  If we fully acknowledge the terrors of the past, we can create new bridges of understanding in place of fear.  It creates activism in place of oblivion.

When we tell what we have witnessed as a people, we create good for our world, informing those who now can no longer turn away from this shared human experience.  Speaking of such atrocities, of loss, of bravery, of survival causes us to explore our own role as citizens.

That is also the power of storytelling.  Everyone’s story is different, but as Victor Frankl said, “Suffering is relative.”  If you’re human, you’ve felt sadness.  You’ve felt hunger, pain, joy, loss, life.  Look all around you, and you’ll see life growing, dying, changing and regenerating daily.

In history, wars ended on shaky terms have led to more wars. Advocates who started revolutions against major symbols of power eventually ended up as the same sort of dictatorship they had once fought so strongly against.  If we don’t acknowledge atrocities of our past, we will never learn from them.  If we don’t honor those we have lost, we will have lost the legacy of a generation, and an enormous part of the Jewish story.

We have seen genocides in our own lifetimes.  Are we doomed to repeat another Auschwitz if we don’t tell of it?  What have we learned if we cannot share this story, the story of us all?

If a story doesn’t fit into their overall perspective, mankind tends to ignore or deny it.  The Holocaust has been denied by millions, whether by those who are anti-Semitic, those who deny the existence of Israel, or for other reasons of ignorance.  These worldviews do not contribute to a peaceful world.

It is our duty to remember the Holocaust, for history, for our people and for the entire human race and our earth.  It is our responsibility to know what humans are capable of in order to prevent anything like this ever happening in the future.  How can we stop it if we cannot speak it?

As a survivor of multiple traumas, I know firsthand that you cannot heal from a life-altering event until you are able to speak it, feel it, embody it and share it.  It took me a long time to tell others I was sexually abused.  The more I tried to repress what had happened, the more anxious I became, until I couldn’t handle keeping these secrets locked up so tightly.

Shocked, upset and overwhelmed, I was living in three worlds — part of me functioning normally in school, keeping up my grades, and telling people I was “fine,” part of me replaying traumatic memories in my head, beating myself up for not saying no, for not running away, for not fighting back, and part of me in a numb, apathetic space of disconnect — a place I created in my head as a survival instinct. If I created a frozen, “numb” space to exist in, I could alleviate the sense of shame I felt.

Reaching out to someone I knew loved me unconditionally calmed my anxiety. Telling someone what had happened made my “dark” secret come to light. By sharing my story with others, I was better able to understand it myself.  I gained compassion for myself and from others.  When I fell into a coma and endured 27 surgeries, I was only able to move on once I could speak of the pain and suffering I felt.

Human life is narratively rooted. If we don’t speak, then how can we literally have a say in how our world takes shape? We need to share the story of the Holocaust to move on, to create peace with ourselves, with others, and to truly make sure we can say, Never Again.

Amy Oestreicher is a PTSD peer-to-peer specialist, artist, author, writer for Huffington Post, speaker for TEDx and RAINN, health advocate, survivor, award-winning actress, and playwright. She works individually with her innovative creativity coaching, business, speaking, and social media courses. As creator of her one-woman musical Gutless & Grateful , the #LoveMyDetour Campaign, which was the subject of her TEDx Talk, she's currently touring theatres nationwide, along with a program combining mental health advocacy, sexual assault awareness and Broadway Theatre for college campuses and international conferences. Subscribe to her newsletter for updates and free excerpts from her upcoming book, My Beautiful Detour, available December 2017. Get your free creativity e-book at amyoes.com/create and a free guide to getting a TEDx Talk at amyoes.com/discover.