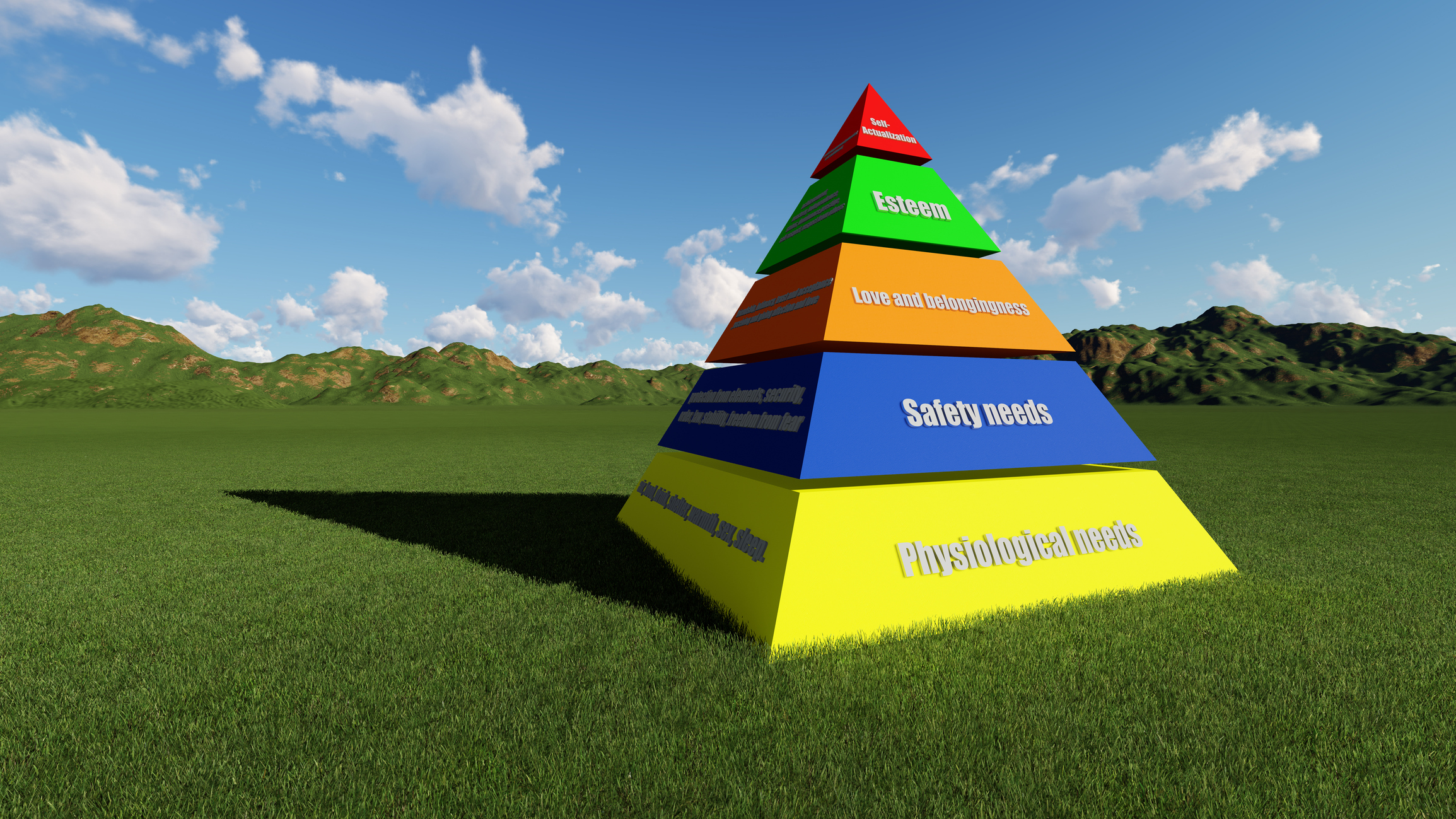 “Maslow’s Hierarchy of Needs” is discussed for the first time in Abraham Maslow’s 1943 paper, “A Theory of Human Motivation.” You may be familiar with this theory, as well as its depiction: a triangle divided up into five sections. The pyramid orders the stages of human need from physiological, all the way to self-actualization. The goal of Maslow’s theory is to achieve each stage of human satisfaction, one at a time, until ultimately reaching the top of the pyramid. In other words, we learn that in order to satisfy transcendent needs, we must first fulfill the most basic of human needs.

Before Maslow, psychology was the study of problems, of people who were “sick.” Maslow was the first psychologist to see the human condition as healthy and natural. At the time, this was extremely unique. Early psychology was all about diagnosing those who suffered from disorders. Maslow’s theory opened the door for solutions and cures, as well as the prospect that human beings are chock-full of potential and have the ability to grow and improve.

What sets human beings apart from other animals is the desire to feel happy, fulfilled, and autonomous. Human beings give an entirely different definition to “survival of the fittest.” While animals live day to day needing nothing more than food and water, humans strive to attain a high status and a large fortune, whatever that may entail. We’re the king of the jungle; we eat, sleep, and breath power. While a beast of the forest can be satisfied by a hearty meal and a stream to bathe in, a self-actualizing human being cannot be — and according to Maslow, that’s absolutely essential.

Food and Water Are Not Enough

When we find ourselves complaining about our personal lives or certain areas where we feel dissatisfaction, we are often reminded to be thankful for the roof over our heads and the clothing on our backs. Basking in such criticism can be oddly humbling, if not something of a guilt trip. However, it is okay to acknowledge that having food on the table and a warm place to sleep is simply not enough for an ambitious human being with an eclectic kit of needs and a booming drive to fulfill them. Acknowledging that these needs exist in the first place is the first step in climbing the pyramid. While these lower steps seem self-explanatory, it is not uncommon for human beings to have difficulty achieving them.

You may believe that you’re casting a large shadow from the top, but believe it or not, you may be farther away from actual fulfillment than you realize you are. And the worst part is, you may not even know it.

The other day I was taking the subway to midtown while listening to TED Radio Hour on NPR. I was surprised to find a podcast on Maslow’s familiar hierarchy, and I was excited to review the material from a psychology course I had taken back in college. While I recognized each stage, I realized, for the first time, how far I was from actually achieving self-actualization, even though I was all too familiar with the concept.

A Stroll Up the Pyramid

Physiological needs are the animalistic fundamental things of which we need to survive. These things include food, water, air, sleep, etc.  As I stood on the A train listening to NPR, I was awakened, quite literally, to the importance of sleep. It’s rather comical how much college students glorify lack of sleep. We pull all-nighters and brag about how much work we completed while simultaneously depriving our bodies of rest. We stay up late texting, staring donut-eyed at our phones, only to come into work the next morning declaring how tired we are from staying up until 4am. But how wild is that? We would never walk into work broadcasting how we just went the past 24 hours without any water or food. That’s just self-abusive. Somehow sleep is always pushed aside when it comes to the discussion of physiological needs.

The problem with allowing self-actualization to perch at the tippy top of the pyramid, is that naturally, people are inclined to jump the gun and head straight for the races. Yet without honing in on the simplicity of consuming healthy foods and sleeping normal hours, how are we ever going to make it past the first checkpoint? And even more so, how can we expect to?

Maslow’s Hierarchy of Needs has been incorporated into many aspects of human society – the marketing and business fields, to name a couple. When a company is determining its marketing approach, it first asks which human need their product or service caters to. A home security company feeds on the fears of timid human beings with valuables to protect. Network security companies promise to keep your data safe from hackers and viruses, preying on your need to feel safe and secure. This brings us to the second step of the pyramid – safety.

In a recent conversation with a friend, we discussed what we each look for in a relationship. Whether with a friend or a significant other, we both agreed that safety is priority number one. In our reckless years of exploration, we often push the envelope of safety as far as it can go. Maslow claimed that while having a safe place to sleep every night does not give us daily fulfillment, it gives us anxiety when we notice it’s something we’re lacking. Safety is by far, the easiest thing to take for granted and therefore, the hardest thing to appreciate until it’s gone. And then what happens?

I recently read an opinion editorial in the New York Times  about searching for happiness in our community as opposed to on our own. While this generation has become so focused on looking for inner happiness via trips to the East and 5am yoga classes, we forget that we’re allowed to seek out joy in other people, and on some level, there’s nothing wrong with that.

We are social creatures. We thrive in social situations, and according to Maslow, human connection, love, community, and acceptance are not a want, but an absolute need. People need love. We need friends. We need gratification and validation – even if we claim we don’t. We seem to be under the impression that we mustn’t care about the thoughts of others — we don’t need other people; other people are bad and distract us from actualizing our whole selves. But if anything, the opposite is true. Recognizing the importance of a community and finding a comfortable place in one is a gigantic step towards the transcendence of the self. Despite what others may like us to believe, sometimes happiness must come from other people before it can genuinely “come from within.”

What exactly is self-actualization? What does it look like, smell like, sound like? But most importantly, how does it feel? Once you are self-actualized, you’ve reached your full potential as a human being. You’ve landed your dream job, you’ve achieved your PhD, you’ve met the person of your dreams. Or maybe not. While self-actualization looks different on each individual, I imagine I’ll believe it when I see it. Once we commit to fulfilling our lower level needs, it seems that the rest comes naturally. By consciously climbing up the steps of the pyramid, we’re able to level up and and achieve more. After all, how can we expect to find the best versions of ourselves when we’ve yet to establish a normal sleep schedule or locate our place in our community?

Love those around you.

Drink a lot of water.

Appreciate the lock on your front door.

Spend time with your friends.

Find something you love and master it.

By satisfying need after need, you’ll eventually find yourself making the journey to the top of the pyramid.