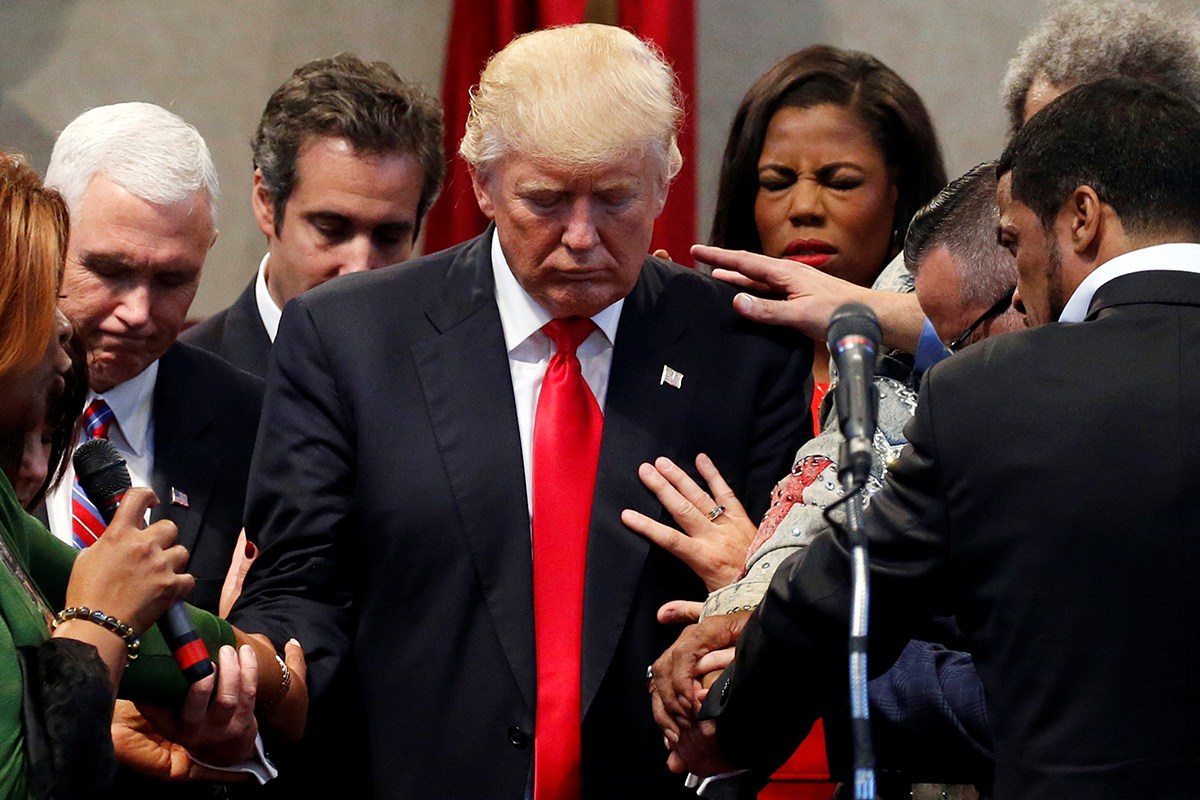 Donald J. Trump’s inaugural address was comparatively brief – 1400 words – but by no means the shortest ever given.  Honors for that would go to President Lincoln’s 1865 inaugural which was only 700 words.  And even he was bested in the brevity category by FDR’s final speech in 1945, which was all of 559 words.

More striking than the length of the talk, was how much God-talk and Bible-quoting happened in that short time.  It was almost as much sermon as it was anything else.  And it was especially striking for one of the more secular presidents, if judged by prior life practice, we have had.

So, should we be surprised by President Trump’s faith-ey address?  I don’t think so.  In fact, it made perfect sense given the rest of his address, which was, for better or for worse, more populist cheerleading than anything else.  We remain a nation of genuine believers even as we are increasingly less regular “belong-ers,” so going heavy on the God-talk and bible quotes made good sense.  And some of it was even profound, whether the President and his advisers intended it that way or not.

I loved his use of Psalm 133 – How good and pleasant it is for brothers and sisters to sit together in unity.  Those words remind us that siblings do not always sit together in unity, suggesting that unity must be actively built and nurtured by all those who seek it, not simply assumed by virtue of shared parentage or citizenship.

The words of Psalm 133 could be a great standard to hold up – one which both celebrates the need to sit/stand together as one nation, as President Trump’s speech did, while letting us know the demands on all of us working in that circle, and to bring in those who either are not there or feel that there is no place for them there.  Seems to me like something the vast majority of Americans need to think about these days, whether you are feeling the joy or the pain, of our new political reality.

Thought 3, for those of you keeping score, has to do with the three clergy whose benedictions rounded out at the inauguration ceremony: Rabbi Marvin Heir, Bishop Wayne T. Jackson and Rev. Franklin Graham.  They were clearly divided along a fault line which goes to the very heart of the future of faith, not only in our nation, but throughout the world.  No, this is not the divide between religious folks and secular folks.  This is the division between those who think that faith, theirs or others’, should be a recognized and celebrated part of American public life, and those who believe that their particular faith should be publicly recognized as exclusively true and valuable.

That distinction was clearly on display as two of the speakers – Rabbi Hier and Bishop Jackson– proudly proclaimed the texts and traditions in which they are respectively rooted, even “dressing the part” in ways that told the world exactly where they come from.  Rev Graham however, who took the pulpit looking and sounding less particularistic, was anything but.  He made it abundantly clear that all are in need of the singular truth and exclusive salvation found in Jesus, and in that being the path to personal, national and global blessing.

That Graham preached that was hardly surprising.  That it is a core belief of his Christianity should not be anything for which he apologizes.  But I do wonder about the need to proclaim that message at precisely that moment.

As much as I understand and appreciate what Rev Graham believes to be a sacred obligation and unique opportunity to proclaim what he believes will save us all, I wonder what sacred obligations toward humility, and opportunities to express solidarity with people of other faith and those of no faith at all, might have balanced his need to speak as he did.  I wonder.

And finally, I need to note the unsurprising, but disappointing absence of any Muslim cleric who would have shared blessings from his own tradition.  Was the offer ever extended?  Were there no takers?  Either way, we all lost out, and I say that as one who shares our new president’s view that we must name radical Islamic terror if we ever hope to defeat it.

But just as we must honestly call out “RIT” for what it is, we must be equally honest about the fact that it is neither all, or even most, of what Islam is.  We lost that opportunity today, and given how much room was left for God and sacred tradition at this event, the absence was particularly noticeable and unfortunate.

So yesterday, this site featured a wise and heartfelt prayer by my colleague and friend, Rabbi Matthew Gewirtz – a prayer for the President.  I will end this post with a prayer for all of us, including the President, inspired by how faith and God were used at the inauguration:

Holy One, bless us with continued inspiration and insight from the sacred writings you have gifted to humanity.  Bless us with the openness of mind and strength of heart, not only to celebrate unity, but to actively build and nurture it.  Bless us with the capacity to blend deep pride and genuine commitment to our particular understandings of your will for us, with genuine humility and compassion about how we live into that particularity.  Bless us with both the integrity we need to address difficult issues, and the wisdom to appreciate that there is always more to the story that any of us finds most convenient to tell.