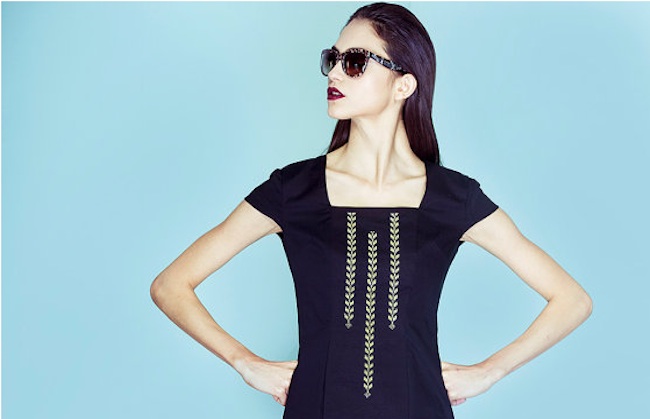 Whatever you feel about the political biases of the 24/7 media, the fact that the only news we see about Israelis and Palestinians is of hate, violence, destruction and death makes it easy to despair about the seemingly insoluble conflict.

Despair is not just the greatest sin, but it’s really a failure of human imagination. The vitriol and enmity that grows each day, as people are traumatized by war, is very real – but it is not the only story. There are plenty of Israelis and Palestinians building bridges. Hearing their stories, as drowned out as they inevitably are by the screaming rockets and blasting bombs of war, is our responsibility (just as much as watching the news is) for those of us passionately concerned about this conflict.

Here’s one such story. Two Neighbors is a remarkable collaboration of talented Israeli and Palestinian women who are launching a new line of handmade elite fashions. Each piece in their collection combines traditional Palestinian embroidery with modern fabrics and silhouettes, creating a blend of old and new.

Imagine what faith these women have in the possibility of co-existence, and the confidence they have that a smart business partnership can defy politics, transcend conflict, create jobs and benefit their communities. Imagine the belief they have in bringing “peace through the eye of a needle,” as their brand phrases it.

There are plenty of Israelis and Palestinians building bridges – hearing their stories is our responsibility.

It’s easy to be cynical and predict that initiatives like this one will amount to nothing – that the stakeholders are na?vely idealistic. But what’s really the greater fantasy, that one side in this conflict will finally vanquish the other, or that we can find a way to live together? Who’s more realistic – those who think that war, however justified, can actually settle this conflict? Or entrepreneurs like these women who are building a brand new business, across deep cultural and political borders?

Conscience and courage do count, even if they appear powerless to change the immediate reality. And hopelessness isn’t a luxury, especially for those of us with some physical distance from the conflict.

So, if you regularly watch the news about this conflict because you care how this war is going, if you sometimes even tune in for updates when there’s not much new in the news (as we now know that violence engages our attention more than calm), I recommend that you take four minutes and watch this video:

Allow yourself to feel a drop of hope. You never know the power of clothes to transform. As Adam and Eve left the Garden of Eden, God clothed them…