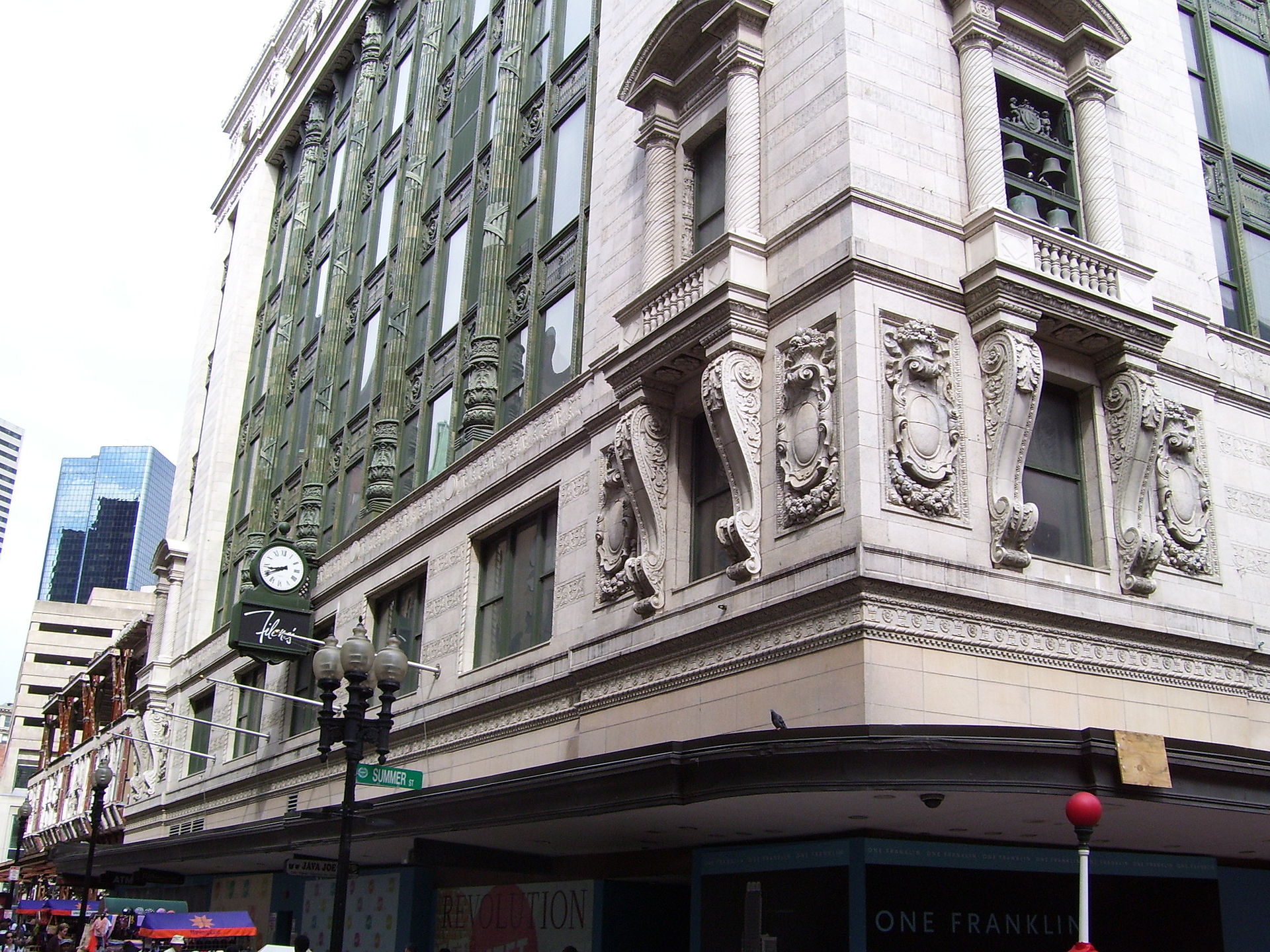 I’ll never forget my first suit. While my ten-year-old self was perfectly content wearing sweatpants and hand-me-down Guns N’ Roses tee shirts, my parents insisted that they wouldn’t be appropriate attire for my brother’s upcoming bar mitzvah. So early one Sunday morning, my father and I made our way to downtown Boston via subway and waited outside Filene’s Basement (of blessed memory) until the doors opened at 10 am.

“The Basement” had a unique markdown system that involved colored stickers and certain days of the week, and Sunday morning at 10 am was the prime time to find the best bargains. So we sifted through every single rack in the boy’s section, then the men’s section, and finally found the perfect suit at the highest markdown in a pile on the floor of the fitting room.

Olive green, wide lapels, a nice 90’s shine to it, and 70% off to boot. He then helped me pick out a couple of shirt-and-tie combinations to go with it, and by 11:30 we were back on the streets looking for a restaurant to spend some of those savings on lunch. And when we finally returned home I wore the suit proudly for the whole day; I felt like a million bucks!

Thus began my three-decade-long sartorial love affair. During my adolescence, I learned to appreciate the baggy clothes that could help me feel less self-conscious about what felt like a less-than-ideal weight-to-height ratio. In high school I took a job at the Gap and spent every penny I made on overpriced carpenter jeans, mock turtlenecks (they were a thing back then), and puffy vests (same).

Years later – after a near-death accident – I filled my closet with hoodies so I could cover the scars on my face. And a few years after that, when I was ordained as a rabbi and simultaneously received my MBA, I bought several new suits so I could overcome an intense case of imposter syndrome. No matter my age or stage, clothes always gave me a sense of security, allowing me to play the part even when I wasn’t fully ready to do so.

Our reading this week – Tetzaveh – offers support to this idea that form can define function. Or, to put it colloquially, that “the clothes make the (hu)man”. In instructing Moses on how to organize and prepare the Priests for their duties in the newly-constructed Tent of Meeting, God says: “Make sacral vestments for your brother, Aaron, for dignity and adornment (Exodus 28:2).” While the ensuing descriptions of breastplates, tunics, and other accessories drive home the point, the essence is clear: these clothes are designed to set the Priests apart from the rest of the community, in order to convey the distinct and critical role that each of them will play in serving God.

I can only imagine the daunting task set before each of the Priests – to stand before the Holy of Holies, to carry the existential weight of a nation on their shoulders and the physical weight of the breastplate around their necks. The clothes, then, might have done more than just offer an outward signal of the importance of their work. Perhaps they also offered an inward one to reassure each of them that they were, indeed, chosen to perform it.

For the past two years – like so many of us – I’ve spent many a working day wearing clothes that were designed for weekends and workouts. Jeans usually mean I have an important meeting, and button-downs are reserved for Zoom lifecycle events and board meetings. Otherwise? Athleisure all day.

And as my demand for nicer clothes has decreased, I’ve gone through multiple purges – donating about half of my wardrobe to others who might need it more than I do. And as I let go of each item that once enshrouded me with whatever courage I needed to make it through the day, I have in turn loosened my grip on the notion that these clothes were what made me in the first place. In a hoodie or a suit, puffy vest, or button-down, my scars are who I am, faded as they may be after all these years.

Adam and Eve, famously, were brought to life unclothed. And while they eventually reached for fig leaves to cover select parts, our rabbinic sages seem to imply that in their original form they may have been unclothed, but they were far from naked.

“What was the dress of the first man? A cloud of glory covered him (Pirkei DeRabbi Eliezer 14:3).” In fact, this “cloud of glory” was so bright that “Adam’s heel outshone the globe of the sun; how much more the brightness of his face!” (Midrash Rabbah). Long before we relied on clothes to protect, define, and cover us, we were born into the greatest dignity of all, created in God’s infinitely divine image.

As our days grew short this fall, I often found myself in Zoom meetings as the sunset in the various locales of my students, colleagues, and friends. At first, I would notice the lighting start to shift in one box on my screen; a brightening of one face, an iridescent glow accompanying their presence. And when I kept my focus on them, I would catch a fleeting glimpse of them completely ensconced in light, their countenance clouded in glory, as it were. And then after their sun completed its descent, another screen glowed, and then another, and another, and another, until we all had our moments in the sun. No matter what we wore, what role we played, and what our screen name said, each of us received a reminder that we were all created in the divine image, and – in turn – to see one another in such a light.

Of late, my morning routine still looks a lot like it once did before the pandemic. But I’ve made one addition: I remind myself that no matter what clothes I put on, my work in this world is just as unique, just as important, and just as timely as the work of my Priestly ancestors. And when I’ve got time, I bring to heart the words of author and poet adrienne maree brown: “i am not afraid/ of what i came here to do/ i’m made of stardust/. we are not afraid/ of what we’re called now to do/ we’re all made of god.”

Each one of us in our sacred sweatpants, for dignity and for adornment.