The Fascinating Story Of Humanity’s Battle With Syphilis 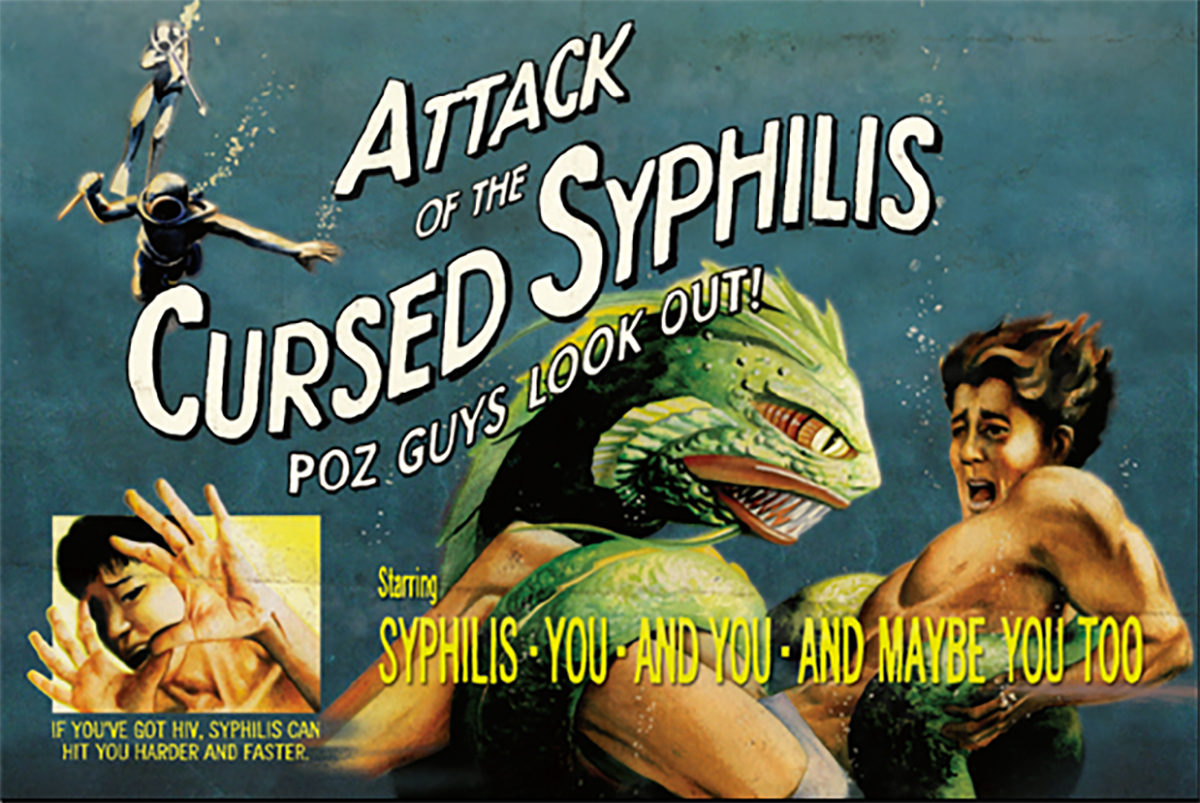 There wasn’t much to do in the one and half horse town I grew up in; so, to enliven an otherwise dreary afternoon, my friends and I would call the VD Clinic. If you rang out of hours you’d get a recorded message, listing all Venereal Diseases known to man. Giggling, red-faced and slightly bewildered, we’d each take turns – leaving a few minutes between each call to allow the message time to rewind. It was shocking to hear such ominous words as “gonorrhea,” “herpes,” and the Big Daddy: syphilis. Afterwards, as an antidote to our ‘Perils of Promiscuity’ tutorial, we’d call Dial-A-Prayer. And so it was – diverted, informed and sanctified – we wrestled an hour from the jaws of abject teenage-boredom.

Recently, I was thinking about potatoes… which got me thinking about syphilis… which naturally brought to mind those calls to the VD clinic. You see, potatoes – native to Peru –  were not the only things Spanish Explorers were thought to have brought back from the New Word. Indeed, along with a pretty bead-necklace or two, it is believed that they also gave their wives (and hoar-friends) syphilis. Having a naturally curious turn of mind, I decided to do a little research and discovered that the story of syphilis is not only fascinating, it is full of hope.

Before proceeding, it is worth commenting on the term Venereal Disease. Basically, it is a rather poetic term that has fallen into disuse in favor of the not so poetic – Sexually Transmitted Disease. Etymologically, Venereal draws its inspiration from Roman Mythology – specifically Venus, the Goddess of love – hence its ascription to afflictions acquired in the pursuit of sensual pleasure; afflictions that were once called, Maladies of Venus.

Interestingly, the word Syphilis is also of poetic origins – quite literally. Syphilis was the name of a shepherd in a poem by Girolamo Fracastoro (who also happened to be a doctor). In the poem, Syphilis, having angered the Sun God, was struck down with a terrible affliction:

He first wore Buboes dreadful to the sight.
First felt strange pains, and sleepless passed the night.
From him the malady received its name.
The neighboring shepherds catch’d the spreading Flame

The progression of the disease has 3 distinct stages.

Left untreated, Stage 1 and Stage 2 clear-up on their own and the disease then lies dormant for up to 30 years, before moving on to the last stage.

The localization of the first-stage symptom makes it possible for the disease to go undetected – even by those infected – which is what makes it prone to spreading. However, epidemiology wasn’t too advanced in Medieval Europe, so the rampant spread of syphilis was thought to be the handy-work of God – in the form of divine retribution for human wickedness. Alternatively, there were those who believe a specific astrological aliment was the cause. And, of course, Europe being the breeding ground of anti-Semitism, Jews were blamed in some circles.

What folk did agree on was that the disease was sexually transmitted. As such, in the repressive climate of medieval sexual mores, syphilis carried with it enormous social stigma; and once the tell-tale lesions appeared, suffers were feared and shunned. No walk of life was immune – kings, clergy, painters and poets – all sorts of folk succumbed to the Great Pox. Even Pope Julius II was struck down. Thought to have contracted the disease from male prostitutes in Rome, Julius II was unable to partake in the Good Friday Pope foot kissing ritual of 1508 due to his syphilitic sore covered tootsies.

Eventually, as information increased and attitudes to divine retribution and star-aliment changed, women became the new fall-guy for the disease. This belief that women – of the wanton variety – paid or voluntarily loose – were responsible for infecting unsuspecting, gullible men prevailed up until the 1940’s, as evidenced by this WWII poster:

Of course, pointing the finger proved an ineffective deterrent to the disease. So, from the first outbreak, Doctors, Scientists, Chemists and Quacks worked tirelessly to find a cure – with varying degrees of success.

Initially, steam baths were thought the most likely cure; the rationale being, one would sweat out the syphilitic toxins. Next came fumigation; Medieval folk were big on funky vapors being the cause of disease – a popular theory for the Plague – ergo, fancy vapors were thought a likely cure.

Such a cures were aided by the ingestion of guaiacum, or holy wood –  to be taken as follows: –

For internal use drink the first potion by the beaker twice a day: in the morning at sunrise and by the light of the evening star.  The treatment lasts until the moon completes its orbit and after the space of a month conjoins again with the sun.  The patient must remain in a room protected from wind and cold, so that frost and smoke do not diminish the effect of the remedy.

Naturally, these cures appeared to combat the first two stages of Syphilis (which actually cleared up on their own) – but proved ineffective at halting the organ failure, bone rot and mental derangement which occurred some years later.

But, never fear, mercury appeared. The chemical element mercury (aka Quicksilver) had fascinated Alchemists for centuries. Indeed, Alchemists – those mystic philosophers with chemistry sets – considered it proof of the possibility of transmutation – changing base metal into gold.

The anti-syphilitic property of mercury was discovered at the end of the 15th century; and was peddled throughout Europe as the grand cure for 400 years. Tricky thing was, mercury preparations were toxic: the side-effects of which included mouth ulcers, tooth loss, kidney failure and death – still, no more syphilis.

Then, in 1910, Dr Paul Ehrlich discovered the curative properties of arsenic. He made a concoction and called it Salvarsan. Known colloquially as a Magic Bullet, it proved to be an effective-ish cure; for which he received a Nobel Prize. As the first use of Chemotherapy to treat a terminal disease, the administration of Salvarsan was grueling and time consuming and its side effects included rashes and life threatening liver damage.

Lucky for humanity, in 1928 Alexander Flemming accidentally grew mold in his laboratory and discovered Penicillin. Not only does Penicillin treat Syphilis – but, given the Great Pox is a bacterium, it cures it completely. Despite this, 12 years elapsed between the discovery of Penicillin and its widespread use in the treatment of syphilis. Further, enormous controversy surrounds its initial use in human trials in Tuskegee, Alabama – wherein, people infected with syphilis were not given penicillin (despite its well-known curative properties for the early stages of syphilis); rather, the disease was deliberately allowed to progress so doctors could see whether penicillin was capable of curing late stage syphilis. Such experiments were conducted by The U.S. Public Health Service in conjunction with the Tuskegee Institute. On the 16th May 1997, Presented Bill Clinton apologized to the survivors of the Tuskegee trials on behalf of the Us Government.

The US Government also apologized to Guatemala in 2010, for experiments it had carried out on Guatemalan soldiers, prisoners and mental patients – who were deliberately and non-consensually infected with Syphilis and other STD’s in order to study the effects of various anti-biotics. Such a gross abuse of power heralded an ugly end to an ugly disease.

Unfortunately, the discovery of penicillin came too late for the hundreds of thousands of people who had already fallen victim to its miseries since its appearance in Europe in the 1490’s – which prematurely ended their lives in the most appalling and degrading fashion. In the words of writer and syphilis sufferer, Alphonse Daudet, “My anguish is great and I weep as I write.”

Syphilis plagued humanity. From it we suffered and lost, cast judgement and wept in agony; it brought out the worst in us and the best in us. But, ultimately, we triumphed. Both by accident and in our relentless pursuit of knowledge. Therein lies the hope that the story of syphilis gives to each one of us. For, as we triumphed over the Great Pox, so shall we triumph over cancer and dementia and any other disease that brings suffering to our brothers and sisters… how else can it be?