Embodying Soul: Musical Instruments and How They Inspire Us 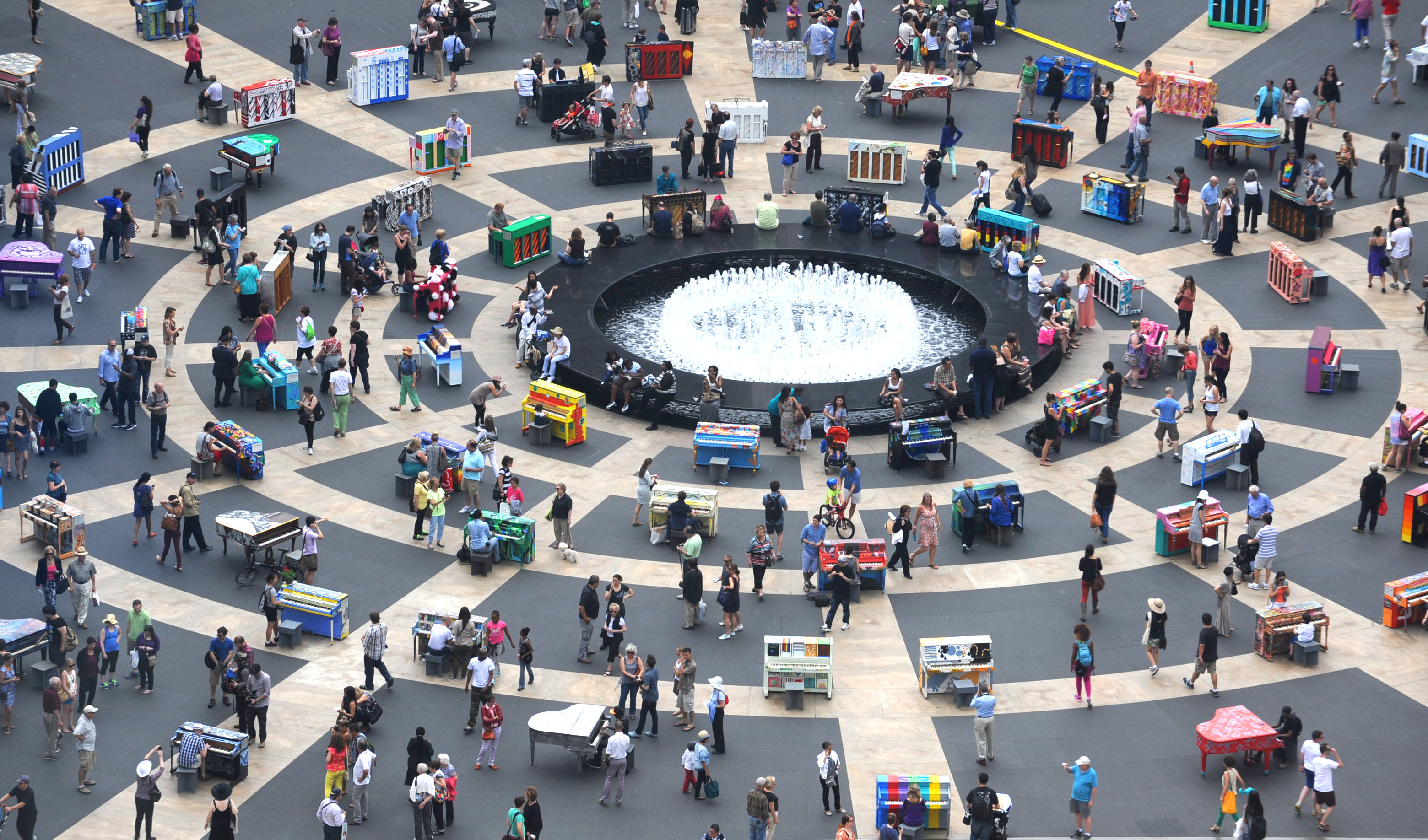 New York City received a special, anticipated treat this June, and nearly every June of the past ten years: a non-profit organization called Sing For Hope has placed donated and decorated pianos in various outdoor spaces throughout the Five Boroughs. These painted pianos can be played by anyone during daylight hours, and occasionally are used for free organized concerts.

If you stop by any “SFH” piano on a sunny day, you might see a small child plunking the keys, or a teenager practicing a piece she learned during the school year, or an amateur adult playing a pop song or classical piece. Sometimes one person commandeers the piano; at other times a group will gather around to take turns, sing, make requests, and snap photos of each other.

A piano can act as a social magnet, drawing people together to make music in a rather old-fashioned way. A large musical instrument that also functions as a piece of furniture, and a de facto gathering spot, a piano offers music that can have the ability to cheer, rouse, soothe, and touch the emotions of those within hearing range. As someone who began formal piano lessons in third grade, I have always enjoyed playing and listening to the piano, and there is a special thrill to hear it played live and played well. But is the piano the only musical instrument with the ability to tug at our emotions? Certainly not. Is it the most likely musical instrument to help us along our spiritual paths? That is up for debate, and many other instruments can be contenders.

People can engage in a wide variety of activities to experience and try to attain enhanced spiritual levels, not just prayer and meditation. Music is an important and oft-used vehicle, or a process, to achieve such goals. Whether it is listening to music (live or pre-recorded) or playing music, people have long felt a special spiritual connection to music. Religions and faiths employ music, including singing and playing of instruments, in their rituals and liturgies. Simple instruments, as well as sophisticated, complex instruments, can be used. Tune and beat, rhythm and melody, they have their roles.

On social media and in person, I asked family, friends, and strangers a few questions, in order to jumpstart my exploration of this topic. On Facebook I asked “What do you think is the most soulful musical instrument?” and on Quora, I posed the question “What is the most soulful/spiritual instrument? Explain your choice.” I admit that many of the answers surprised me!

GSV: “The trumpet because (it) always colored these classic soul songs the most.”

LZ: The trumpet because “it can be muted or pushed hard, notes can be bent or screamed, and can fit most any music, IMO.”

LMC: The sax. Not as brassy in sound as the trumpet…less muted than the clarinet and more auditory brilliance than the French horn, it seems to convey soul at a deep level…it’s the instrument I love listening to the most.”

RKG: The cello because “it has low full-bodied notes and can also flirt in the higher registers.”

JHE: The oboe because “I tend to react to lower notes/deeper sounds… it speaks in a language beyond what words are able to express.”

JW: I think the human vocal chords are the most soulful…if I pick an external instrument, I would say sax. The differing tones of a tenor sax are so expressive.”

WD: “I kinda go with trombone, though it could be cello in the right hands (very rare.)”

Other votes without explanations went to the oboe, the voice, the bass clarinet.

I must admit I did not expect most of these answers, although the word “soulful” may have brought to mind soul and jazz, more than soul as a person’s essence. Still, these are emotional reactions people have to musical instruments, and how they are touched by the sounds created.

On Quora, people reacted in this way:

LB: I have always loved the Duduk, an Armenian reed instrument, and the Kabek Kemane, a Turkish 3-string viol…any sense of spirituality or soul essentially arises from the culture and its effect on the music a musician ultimately makes. Alternate tuning systems and note ornaments also have an effect on its spiritual vibe.

DC: The harmonica… because it really is a supremely expressive instrument that can sound both soulful and spiritual. The Uilleann pipes… sound most hauntingly beautiful and spiritual to me.

RJ: I think it’s more the player and what they can do to their chosen instrument.

DC: For me, it’s all about context rather than individual instruments. The oboe might get a special commendation as soulful and spiritual almost regardless of musical context.

KV: For me it would be the electric guitar. The sheer power of the sound and the ability to shape it in so many ways lets me express my connection with something that’s transcendent.

AG: The Scottish bagpipes… they speak directly to our souls. The skirling pipes produce an effect like no other instrument, filling we otherwise rationalistic, tamed moderns with strange, wild longings.

DR: The violin. It’s such a beautiful instrument, and there are so many ways to express feelings through music. You can express your anger, your joy, your sorrow with just this one instrument. The violin has a soul of its own.

Even these answers show the range of choices people have as far as assigning spiritual strength and value to musical instruments.

Certainly, some musical instruments have much older roots than others, which may bolster the case for their spiritual depth due to the long-standing customs established. Pipes and simple drums, as well as timbrels, are mentioned in the Old Testament. As mentioned in a MyJewishLearning.com article, “In the Bible, music is associated with praising God at times when words do not suffice. Musical instruments appear in this context in biblical narratives, poetry, and legal sections.” Exodus 15:20 states that after the parting of the Red Sea, “Miriam the prophetess… took a timbrel in her hand, and all the women went out after her with timbrels and with dances.” This was a celebratory form of praise, worship, and joyful, victorious expression. It could be viewed as a physical exercise of spiritual expression and triumph. There are other mentions of musical expression connected to liturgy and religious devotion, tied to holidays (blowing trumpets, for example) as mentioned in Numbers.

A Jewish Encyclopedia article, “Music and Musical Instruments” written by Emil Hirsch and Wilhelm Nowack lists other occasions in biblical times when music was used to heighten the religious experience: the return of “victorious generals,” “dances at harvest festivals,” “the accession of kings or their marriages.” Young David and the prophet Elisha relied upon harp playing for inspiration. Certainly, the instruments used back then were more archaic, but percussion and wind instruments were the primary vessels. Just as modern instruments can greatly move people now, these ancient instruments moved not only prophets and royalty but the average citizen as well.

Other religions and faiths utilize musical instruments, and while some of these instruments originated with and are greatly associated with certain regions, they have become popular elsewhere. Native American musical instruments such as drums, flutes, shakers, and whistles are used in a ritual form to enhance spiritual awakening. Those associated with new age groups and faiths will use a wide variety of instruments as well, such as: Himalayan singing bowls, Tibetan Tingsha cymbals (I have a pair, and boy, do they resonate when struck strongly), Tibetan meditation gongs, Dorje meditation bells, wind chimes, and other percussive pieces as a part of their practice. Some people gather with others to play these, while others use them by themselves. The NewAgeSource.com explains that: “Musical instruments have been used for centuries across the globe in healing and cleansing practices, religious and spiritual ceremonies, and personal meditation and prayer.”

It should be noted that these older types of instruments are played in a simpler style than that of more modern instruments such as piano, guitar, sax and many others. Perhaps it is that the new age, or more traditional instruments, are played in simpler patterns, and the focus is not so much on virtuosity as on simple, meditative patterns.

But does this make the more studied, deliberate music of a band member or orchestra member less of a spiritual experience? If someone is employed as an oboist for a regional orchestra, will her work shift be a more worldly endeavor and less of a spiritual journey? Perhaps the oboist will find practice sessions at home to be a time of more personal spiritual growth, than the nerve-wracking performance in front of thousands of paid audience members.

What about the organist at a church? For those in the pews, the music can be immensely uplifting and spiritual. The musician might even feel a special oneness with her or his instrument. There are so many ways in which a musician can connect with their flute or guitar, and listeners can feel transported.

More research and writing can delve into such topics as spirituality evinced in the works of particular composers, or certain songs. The role of teaching music seen as a spiritual road can be explored. The setting of live music can also be analyzed for spiritual context: rock ‘n roll concerts versus religious services, drumming circles for abuse victims and musical therapy sessions for physically challenged adults, professional pianists playing Chopin compared to late-night jam sessions for beboppers.  Perhaps, in future articles here, we will tackle these topics.

When does the music morph from practice or work to the spiritual ladder? Can it function as both? This is a very personal question, in the long run. But we know that music, for those who are playing it as well as those who are listening to it, can be a spiritual aide. Inspiration may not occur all the time, which might disappoint some. But when the conditions are right, that Debussy piece or that Coltrane solo or that gong pattern can help a person achieve a spiritual breakthrough.