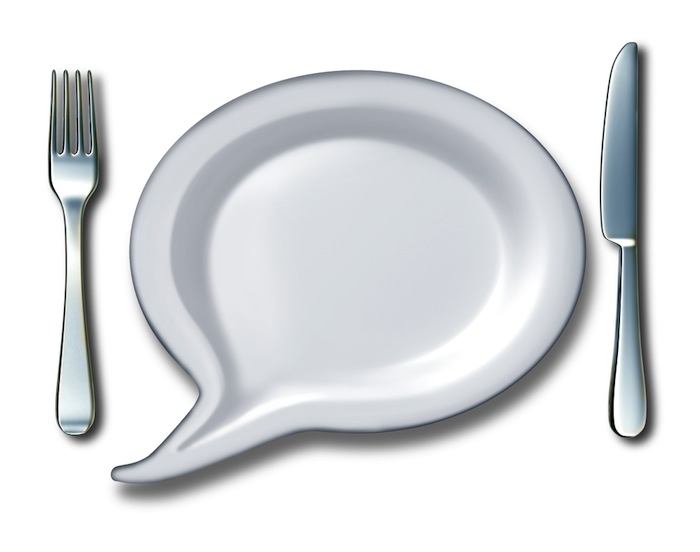 When was the last time you had really good dinner conversation with family or friends? Conversation that was not interrupted by the many ways our devices have a hold on us: the compelling ping calling us to a text or an email, the insatiable desire to check our Facebook page, tweet a thought, take a photo, or Google anything.? A conversation that was more than just a breezy catch up, one that was spirited and smart and made you think in some new way and become more connected to someone because of the dialogue.

From the ancient Greek symposia to Gertrude Stein’s famous Paris salons, conversation around a meal has always been the incubator of new ideas, action and more intimate relationships. And we know that dinners which incorporate genuine engaged conversation with our kids are one of most beneficial activities parents can do with their children.

So here is a question for your next dinner that is guaranteed to spark lively discussion especially among people (and teenagers) who have strong moral convictions:

What uncontroversial and widely accepted ideas today will seem outrageous or immoral 100 years from now? We tend to think of ourselves as so much more evolved and enlightened than people in the past. We have done away with slavery, torture, bloodletting, public executions, witch-burnings, lynchings, and a wide variety of shocking prejudice towards women, people of color, and homosexuals – and we are proud of ourselves for having done so. But thankfully our moral imagination continues to expand. So what ideas and activities of ours will our great grandchildren look back at and find crazy or immoral?

The key is you can’t suggest things that you now find problematic – in other words you can’t just predict that you will be right about one of your causes. Rather, what things do you do, support, are okay with, believe in today – that you don’t find objectionable?- that you can imagine (feel that bit of conscience gnawing) will be seen so a century from now and why?

Here are a few that were admitted to at a recent dinner party where no one answered a technological call!? Eating animals, watching football, abortion, the death penalty, private school, ads in public spaces like busses, schools and parks, carbon credits, God… Well, you get the idea. Enjoy the conversation and let us know what you come up with.