Albright and Condi and Gates, Oh My! 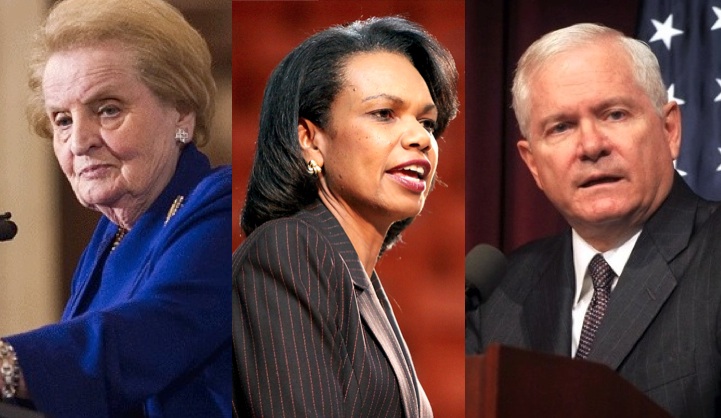 Between Israel and Gaza, Ukraine, and the mounting horror that is ISIS (Islamic State in Iraq and Syria), not to mention Afghanistan, the United States is currently involved, in one way or another, with four different wars. Not all are equally “hot”, and we are currently “only” bombing in one of them, but a quiet time in foreign policy it is not! That made this week’s opportunity to hear from two former Secretaries of State and one former Secretary of Defense, especially interesting.

I sat in a tented pavilion on a sunny August afternoon in Aspen, Colorado, and listened to former Secretaries of State, Madeleine Albright and Condoleezza Rice and former Secretary of Defense, Robert Gates discuss what all agreed is one of the most challenging moments in the past half century of global affairs. Perhaps surprisingly (or perhaps not), many of the stories they shared and explanations they offered were instructive on a personal, as well as a political level.

The first insight: that even a pathological excuse for bad behavior needs to be taken seriously, if you hope to make progress with whomever you are engaging. Here, the issue was “humiliation” – often used to justify some of the world’s worst behavior.

Sec. Albright described doing survey work in the former Soviet Union in 1991. A participant rose, and with great pain, declared, “We have become Bangladesh with missiles”. For her that sense of national humiliation is central to understanding Vladimir Putin and Russia’s current aggression. Both Rice and Gates quickly concurred.

Her point was how central the issue of national humiliation is, and how seriously it needs to be taken, regardless of what a poor and pathological rationale it is. If you want to make progress, and hope to stop short of the use of force, than you better appreciate the difference between an explanation and an excuse. Good advice for any relationship – international or interpersonal.

The second insight, and certainly the most quotable line of the afternoon came from Secretary Gates, who remarked, “I have always thought of diplomacy as a process of saying ‘nice doggy’, ‘nice doggy’… until you can find a rock!” In other words, we don’t have to choose between calming words and the option to use force.

In fact, it might be just the opposite. It might be that when we are at our strongest, and know that should the need arise, we will use that strength, we should not hesitate to ‘make nice’. After all, we can always pick up the rock later, if we must.

The third insight had to do with Secretary Rice’s passionate plea that the U.S. not “tire” of international involvement. She reminded us that too often, when the U.S. has stood idly by, or entered the fray too slowly, innocent people suffered. I can’t say I disagree, but I was struck by the fact that she, and all three Secretaries really, all spoke as if a “desirable outcome” can be achieved in at least most, if not all, political hot spots. I wish that were so, but I doubt it.

Often times, be it in the world or in our lives, the best possible outcome is not a “good” one. Sometimes we cannot fix the situation, but that doesn’t mean we cannot make it better.

For me, it’s not about turning inward versus turning outward, or accepting that we are “getting tired”, but about remaining energetic in pursuit of goals that are far more humble than those we often invoke. We can make sure that perfect never becomes the enemy of the good. We can all enthusiastically pursue making things better, even if we will never make them all that we wish they could be. I am not sure that is what Secretary Rice meant, but they are not bad words to live by.