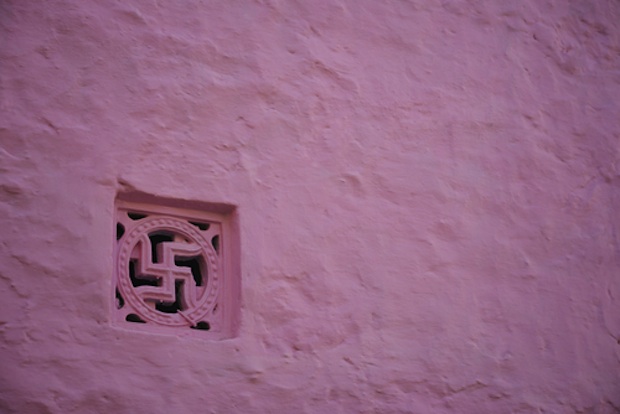 This week, I was asked a number of questions regarding the use of the swastika. And while it might surprise some of you, it’s not as simple as telling the questioner that they’re crazy to even ask.

In fact, a 17-year-old girl from India named Swastika recently told me she was worried about studying abroad in the future, given her name. Don’t forget that the swastika was not always a Nazi symbol. It appeared in Hindu culture (as a symbol of God, from an even older use as a symbol of the sun) more than a thousand years before it was adopted into use in Germany.

The questions I got included:

Here are my thoughts. While focusing on this specific issue, they’re really about how to approach any symbols which have vastly different meanings, depending upon who is using them (and in what context they’re being used).

How do you balance your own cultural needs and sensitivities with the importance of making room for others?

As for discussing it, very few topics are taboo for me, and many Jews I know. We love to talk! But if you’re asking whether or not the swastika is “redeemable,” I believe that all symbols can be reclaimed and redeemed — with enough time and effort.

I also think that we’re a bit early in that process when it comes to the swastika, at least in any region of the world (or family, for that matter) touched by the Nazis. It’s simply hard to imagine redeeming any Nazi symbols while Nazi victims are still alive bearing actual tattoos from concentration camps.

I can’t say I know what a “full-fledged Hindu effort to reclaim the symbol” means. Is that about opening conversations regarding its use? Does that include frank conversation about why the choice to use a swastika is so important, and to whom? Remember, just as there’s no such thing as “the Jews,” there is no such things as “the Hindus,” so the questions of who’s doing this (and why) are potentially more important and interesting than what they’re doing.

A girl named Swastika may have a problem, just as anyone unfortunately named Hitler would. Again, the idea that the problem would, or should, be limited to Jews is itself terribly problematic. What if her name were “Ni**er Hater”? Would that only be a “black problem”? Sure hope not!

Some names just don’t fly, at least in some social, geographic or cultural contexts. They are not inherently evil – I don’t know that any word or symbol is – but may be contextually all wrong. The real issue is how much a person cares, not only about the importance of asserting who they are, but about others as well.

I appreciate that names are serious, even sacred, things. I would hate for this young woman to give up hers. She might choose to go by “Swas” – and then, when people could appreciate her for who she is, let them know her full name and how she came to have it. We all go by many names, and not all of them are for everybody, right? The greater the intimacy, the more names.

How would you answer the questions above? How do you balance your own cultural needs and sensitivities with the importance of making room for others? After all, that’s really what this is all about.