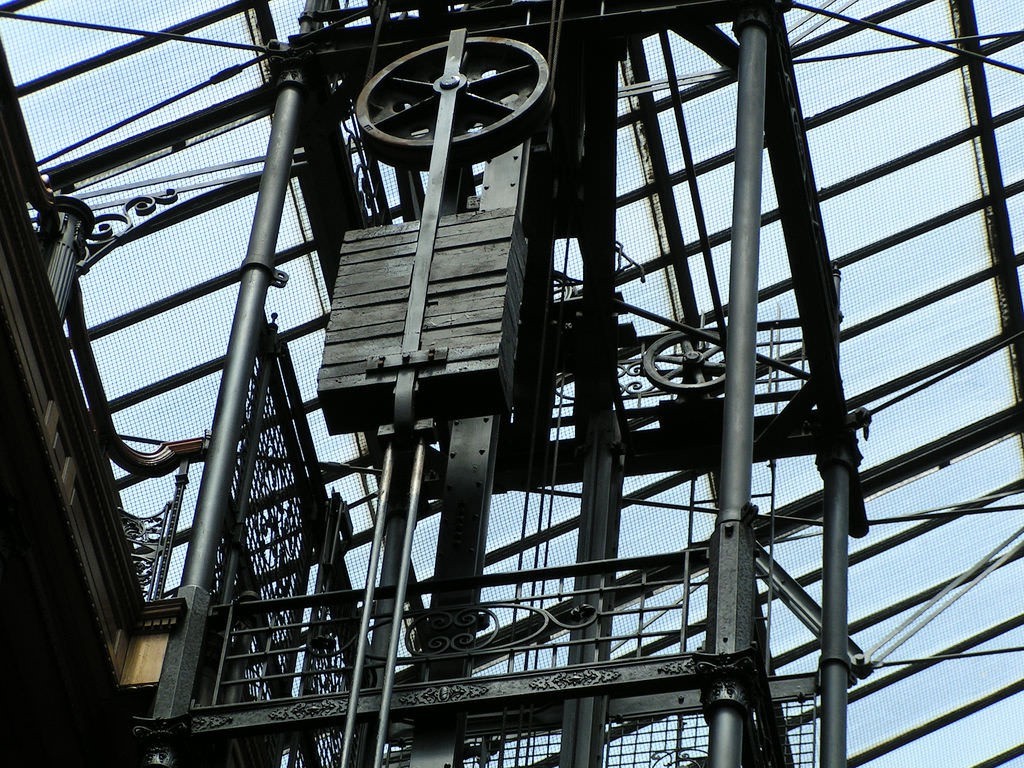 My first impression was that it was a fancy elevator. Too fancy perhaps. The fine details were ostentatious, plush, and seemed too opulent against the modest proportions of the tiny space; a place that seemed sympathetic to the size, if not the silence, of an empty confessional.

I stepped across the threshold, which was marked by a bronze plaque, proudly declaring that this mobile vestibule was indeed the work of the Otis Elevator company. It reminded me of a hood ornament, as if to imply I was going somewhere.

There was just enough room for two or maybe three people, but I was alone on this occasion. I pulled the gate and closed the door in front of me before I pushed the button. There was a jerk, and the initiation of conspicuous machine noises operating just above, just behind the periphery of the ceiling. I was being lifted by some unknown thing, which the ceiling neatly obscured. I tried to imagine the contours of the cables and pulleys that must have been nearby, but just out of sight. I imagined their purpose unencumbered by the supererogatory ornament I found all around me.

As I felt the heavy pull on my body in the ascent, my attention was drawn to the motifs above my head. The patterns culminated at the center around a single flickering filament. The tiny bulb quietly buzzed against the backdrop of a much louder hum, almost imperceptibly, and then distinctly. I imagined heaven babbling above me, and all the things unseen. I thought of the arches and arcades of Flamboyant cathedrals, and the way church spires had once dared skyscrapers to penetrate the sky. I thought of all the things that can be seen, as they point to things unseen. My attention was drawn upward.

But if it can be said that the ceiling was concealing, then it can also be said that the walls were commodious. On three sides there were mirrors of capacious proportion, which were situated from the height of my waist to where the edges met the ceiling above my head. The effect of these mirrors was infinite space within the boundaries of a tiny room. It was dizzying, but also sublime. It reminded me of indefinite landscapes stretching out across the Great Plains, where the sky and the land meet on a perpetual horizon.

The mirrors faced each other, inward as I went upward. I faced them, which trapped me inside of them, holding me in an unceasing recursive echo that permeated outward across a boundless horizon of cascading mirrored reflections. The movement was centered on the place I occupied; on my own image, my own gaze. And it occurred to me that these reflections, in their multitude, ascended with me and with the rest of the carriage, extending outward along an infinite horizontal axis that was folded within the finite vertical axis I was traveling on.

For Jacob, the axis was a ladder that reached from earth to heaven. For Dante, it was pilgrimage through the total moral universe, For me, it was this elevator, which had become my axis mundi, anchoring heaven to earth. This lift had become the center of the world.

Just then my attention shifted abruptly to a bell announcing that the carriage had arrived at its destination. No more than a minute could have passed from when the journey began, but the distance I had traveled seemed vast. I looked at the door in front of me, and I pulled the gate to the side as I prepared to step out. As I did, I was astonished to discover that I had apparently arrived on the same floor from where I had left. I couldn’t be sure if I had been elevated through the building or if I had remained stationary, there in that fancy little elevator.