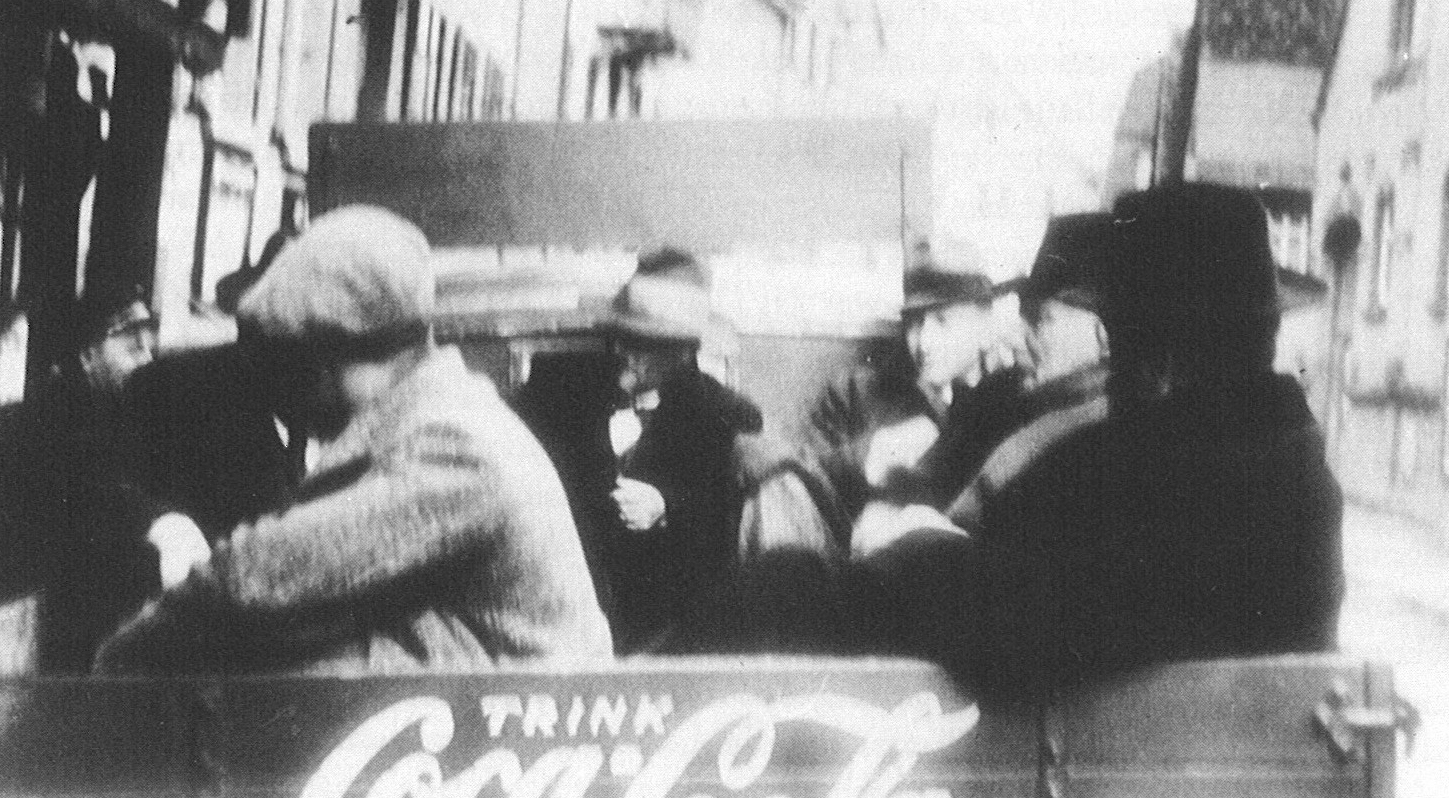 It was evening.  It was morning.  Two days: Kristallnacht, November 9 – 10, 1938.  Some of the details:  In Germany and Austria about 100 people were killed; over 260 synagogues were destroyed; about 30,000 men were sent to concentration camps.  My father was one of them.  It was the beginning of the end.  It was the Shoah.

I miss my father who died five years ago.  I want to talk to him again about Kristallnacht 78 years after; I want him to tell me the story, again.  But now it’s my turn to tell it.

On the night of November 9, 1938, along with his mother, father, older sister and younger brother, he hid in the basement of their home in a small village in Germany.  The shutters were closed to protect the house from the rocks being thrown, the doors locked against looters.  The synagogue was not burned because it was connected to buildings on both sides owned by non-Jews.  The next morning my father was ordered to report to town hall.  He rode his bike and spoke with the Gendarme, the local policeman.  He had gone to school with his daughter before Jews were no longer allowed to attend school with non-Jews.

The Gendarme told him he was being arrested.  “What for?  What did I do? I’m only 16.”  The gendarme told him that if he didn’t like it, he could go home.  They’d arrest his father instead.  He needed a quota of 10 men, and he didn’t care how he filled it.  My father saw his father sitting in the next room paying his taxes.  My father didn’t want his father to see him and try to take his place.  My father knew where he was going to be sent.  Along with nine other men, my father was put on a truck that had a painted banner, “Drink Coca Cola.”  They were sent to a county jail.  Two days later, they were put on a bus to Dachau.

Upon arrival, my father was processed.  He was signed into the entrance book.  A kapo looked at him and said, “You’re young to be here.”  The kapo filled out his name, address, and age.  He got to the section that said “Occupation” and thought for a moment, then wrote down “student.” My father stood in another line to turn in his clothes and shoes; he stood naked in another line for a shower.  Another kapo told him to hold his breath when the SS aim the hoses at his mouth.  “If you fall, they’ll gang up on you.  They’re just kids, they’ll get a kick out of it.” He stood on a concrete slab, and the SS turned hoses on him.

It was November 8, 2016, and I was watching the election returns.  It was November 9 when the results were final.  I was scared, feeling a pit in my stomach.  Was I now living in 1930s Germany?  I tried to calm down, but it took a few days.  I believe in the goodness of people, but I also know there is much evil in this world.  I saw what it did to my father and his family.  It’s been a little over a month since the election, and my verdict isn’t in yet.

There have been anti-Semitic incidences, as well as other racist acts.  There is a part of me that says, I’ve been through this before, as a daughter of survivors.  It’s someone else’s turn to take action.  And there is a part of me that is afraid to write this and have it out in the public square.  But I know I don’t have a choice.  So many were not saved from the Shoah because others were afraid to stand up.

When I saw footage of people giving Nazi salutes at a recent conference held only a few blocks from the United States Holocaust Memorial Museum in Washington, it made me afraid of what could happen here.  The anti-Semitism that has long been simmering under the surface in this country was now much more out in the open.  And for that moment, yes it did make me feel that I was living in 1930s Germany.

Poet Wilfred Owen wrote of his WWI poetry: “My subject is war, and the pity of war.  The poetry is in the pity.  Yet these elegies are to this generation in no sense consolatory.  They may be to the next.  All a poet can do today is warn.”  Jewish wisdom says to remember doesn’t just mean to only remember – it also means to act, otherwise memory serves no purpose.  I don’t know if another Holocaust could happen in this country, but I’m sure things could get very bad for Jews and other minorities.  I’ve told my parents’ stories in poetry in my book, How to Spot One of Us.  That’s my action.  I’ve given readings and spoken in many schools to teens telling them about the consequences of prejudice and hate.

I’ve been thinking about ladders as I try to come to grips with another anniversary of Kristallnacht and this year’s election.  In the Parashah of Vayetse, Jacob is running away from his brother Esau and takes stones and puts them under his head to sleep.  He dreams of a ladder set on the earth and the top of it reaches heaven with angels climbing up and down.  It’s a very strange construct.  Shouldn’t it be the other way around?  While it would be wonderful if everything flowed down from heaven, that isn’t the way it works.  I need to have my ladder start on the ground, ground that is firm and strong and can hold me.  As a poet, I know that when I’m scared I need to be grounded.  It is so easy for me to fall down the rabbit hole that is anxiety and despair.

I want to believe that the hate in this country can be countered, that it can be tamped down.  “I always had hope I would get out of Dachau,” my father told me.  He knew that his ladder did not start in heaven, yet throughout his life he believed in the possibility of a better world and taught me to believe the same. There are some who say we are living in 1930s Germany and some who think we have nothing to worry about.  I don’t know what will happen.  There is so much that is out of my control.  But what I can work to control is to be less afraid and anxious, to be more hopeful, yet more vigilant, and to act against prejudice and genocide.  That’s my ladder up to heaven.