AFI Club: Lawrence Of Arabia… Maybe There Are No Special People 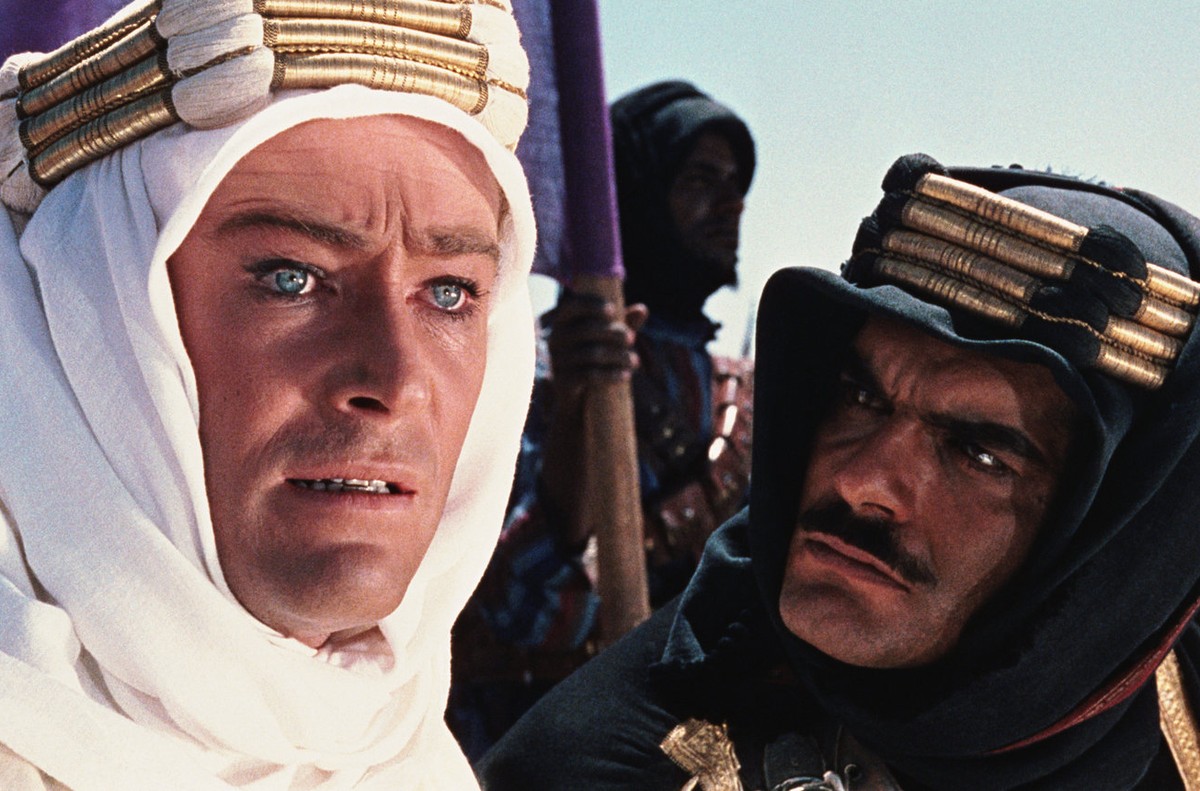 Welcome to The Wisdom Daily’s AFI Film Club! Each month, I will be counting down the Top 10 American Film Institute’s list of Motion Pictures (the 2007 update) and exploring an American ideology/ theme in a recap. Why AFI? Why here? Why Now? Why Me? Click here for a brief rant on my connection to the catalog (insert inappropriate “the list is life” joke here). Enjoy the post and comment (about the film please- I already know that I’m terrible at the kazoo).   Here is AFI’s #7, Lawrence Of Arabia:

If you are a child of the 90’s, you are probably the product of “special” treatment. Our parents saw their own trauma reflected in the angsty grins of the John Hughes adolescence and swore to do it better when their turn came.  My contemporaries were told that we were wonderful, gifts from God, playdough pros who were bound for the Oval Office.

Those sentiments of grandeur however, did not last for long, as we learned that our origin story was more fan-fiction then factual. We got to first grade, high school, college, our first job, and were surrounded by people chanting the same Monty Python joke, “We are all individuals!”.

There is nothing objectively remarkable about us; we are not owed anything.

Of course, there are those who are above average and who do become president (though recent years have proved that those are mutually exclusive).

There are those whose wisdom is precise and whose ambition seem like an accessory to their outpouring of talent. Their words draw you and many others into their cult of personality, so much so, that you can’t remember your life without them. They are in the realm of extraordinary, and while you may envy them, you’re ultimately relieved; they have a world to save.

It was hard to watch Lawrence of Arabia. Not just because it infantilizes and sensationalizes the Middle East, is pseudo-critical of colonialism, and has a stiffly-written screenplay, but also because it’s four hours of a blonde white dude frolicking around the desert. I must have missed something, because I don’t covet Peter O’Toole’s performance the way many do; I find it to be over the top and and uncharming. The use of blackface is inexcusable, and no matter how progressive Lawrence’s ideals are, he only helps in the dooming of his newfound community’s fate.

Yet, I’m not going to focus on the appropriation and degradation of the Middle East, not because it isn’t important, but because it goes beyond the scope of this recap. I will however, link a few articles that do a good job critiquing the film in the lingering questions and thoughts at the bottom.

Instead, for now, I challenge myself to look beyond the aspects that made me uncomfortable, and focus on T.E. Lawrence, one of the “special” people. Here’s a man who was constantly striving to make his own narrative, and to be a hero and a savior.

But first, a short summary for a long film.

The film opens in the British countryside where a middle-aged T.E. Lawrence (Peter O’Toole) does his best Danny Zuko and gets into a fatal motorcycle joyride, resulting in a funeral filled with reluctant guests. The film flashes back to WWI, when Lawrence was a young British lieutenant sent on a mission to negotiate with Prince Faisal (Alec Guinness), a Bedouin leader rebelling against the Turks. Lawrence and Faisal hit it off – they both seem to understand the importance of an autonomous nation- and Lawrence becomes invested in helping Faisal’s campaign for independence. The Prince agrees to Lawrence leading his men in an attack of the Turkish-occupied Aqaba.

In alliance with the Howeitat tribe, led by Auda Abu Tayi, Lawrence and his men enter the city and conquer it. He becomes a liaison between the British army and Prince Faisal’s followers, though Lawrence becomes progressively more invested in his community in Arabia than with his British roots. Ultimately, the war ends, and the British become super sketch with a deal called the “Sykes-Picot Agreement,” which deprives Prince Fiesel and the other Bedouin groups their freedom. Lawrence is crushed by the betrayal, but makes a “big push” to keep Damascus, and after a final bloody battle with the Turks, Lawrence’s army takes Damascus. But, as a wise founding father once said, “Winning was easy, young man, governing’s harder,” and ultimately, the politicians of Damascus fail to make an independent nation. Lawrence leaves, never wanting to return to the desert again.

“In ten days you will cross Sinai?”

Lawrence is the Messiah who believes in his own second coming. Before his meeting with Faisal, he is considered brainy and a little quirky, showing off a party trick where he lets matches burn his fingers before blowing them out. He is restless, looking for an adventure, but also for something that will make him important, a rebel without a cause (yet).

When he meets Faisel, it seems that he has found his calling and adopts a vision of a united Arab nation, but it seems to be more of a personal redemption than a well thought out revolution. Much is written about Lawrence’s sexuality, and how director David Lean made his queer identity as deliberate as possible during the 1960’s.  This included the use of eyeliner applied on O’Toole’s face, the catwalk and swirl Lawrence frequently does in his Bedouin clothing, and the illicit sexual relations he is having with his colleague, Sherif Ali.

His sexual isolation makes him different from his British comrades, and thus, he relates to the desert in its “cleanness” and vastness. A united Arabia is a united and accepted Lawrence; it’s an affirmation of greatness, a validation that he is special. His philosophy is a lofty goal rooted in an idea that goes beyond a real knowledge of the Arabian people he is leading or the British army.  Lawrence is starting to see that his absolute vision doesn’t allow nuances, and anything or anybody that gets in his way faces death.  Lawrence becomes more manic, more bloodthirsty, famously requesting that they take no prisoners in the Takua battle against the Turks. He is unable to create lasting peace and that seems to be his final straw.

“Moses was a prophet and beloved of God.”

Auda Abu Tayi is the foil to Lawrence’s delusions of grandeur. Both men share traits of boastfulness and self interest, but Tayi is more straightforward about it and has a shorter end game. Happily in charge of his Bedouin group, the movie depicts him as ready to abandon the master plan if there is no immediate gain for him. He sees a more nuanced and darker view of Arabia than Lawrence. He knows of a desert that has “swallowed the blood of a thousand.”

In one scene, a man falls off his camel, and Lawrence goes back to get him, but Tayi just shrugs it off. He’s not  focused on the individual’s importance, and thus not the biggest advocate in uniting Arabia. He’s cynical about everyone agreeing, and he doesn’t see the value in organized government, reserving all his allegiances to the Creator above. Unlike Lawrence and Prince Fiesel, who see themselves as divine figures, he trusts in a higher power than that of men. He answers to Allah only, and not to Lawrence or any other mortal.

Most of the action of this movie happens during the day. The bloodiest, biggest attacks, most intense moments, happen with the sun beating down, witnessing all the bloodshed and pain. Nothing new happens under the sun’s presence, and each person eventually meets their fate. Lawrence dies in a remarkably unremarkable way, a motor accident on the rolling hills of Britain. In this sense, he is not special.

Lawrence is not Joshua, he cannot make the sun stand still. Instead, time continues, and he uses it to kill and ruin himself.  Yet, he was able to get a myriad of people to follow him and listen to him. He had the power to change and inspire millions, yet in his wake he left turmoil.

If I was in a school yard next to T.E., I wonder if I would pick up any sparks. Would it even matter?  While the film challenges T.E.’s notions that he is like Moses, it does ascribe to the idea that he is a martyr like Jesus, sacrificing everything so that ordinary people could live in peace. In some ways, T.E. fails, unable to bring success. Maybe that’s all that the special people get, admiration. They can’t really save the world-nothing changes under that beating sun- and they return to where we all came.

It is the ordinary men that seem to get their way, British officer Allenby, Tayi, and Faisal.  Maybe all people like Lawrence have is other people acknowledging the fact that they are special as their trophy.  All the things we accomplish might just be random, luck, or divine. The extraordinaires need us as much as we need them, maybe more.

1.Alright, as promised, here are some really cool articles/blog posts:

2. I didn’t get a chance to talk about our American reporter friend, Jackson Bentley. What do you think of the idea that “We Americans were once a colonial people, and we naturally feel sympathetic to any people anywhere who are struggling for their freedom.” Are we really supposed to buy that sentiment?

3.Is this anybody’s favorite movie? Please feel free to make a strong argument for this.

Thanks for reading! Tune in for next month’s recap of AFI’s #6 spot, Gone with The Wind…