AFI Club: Gone With The Wind Clings Desperately To A Dying Era 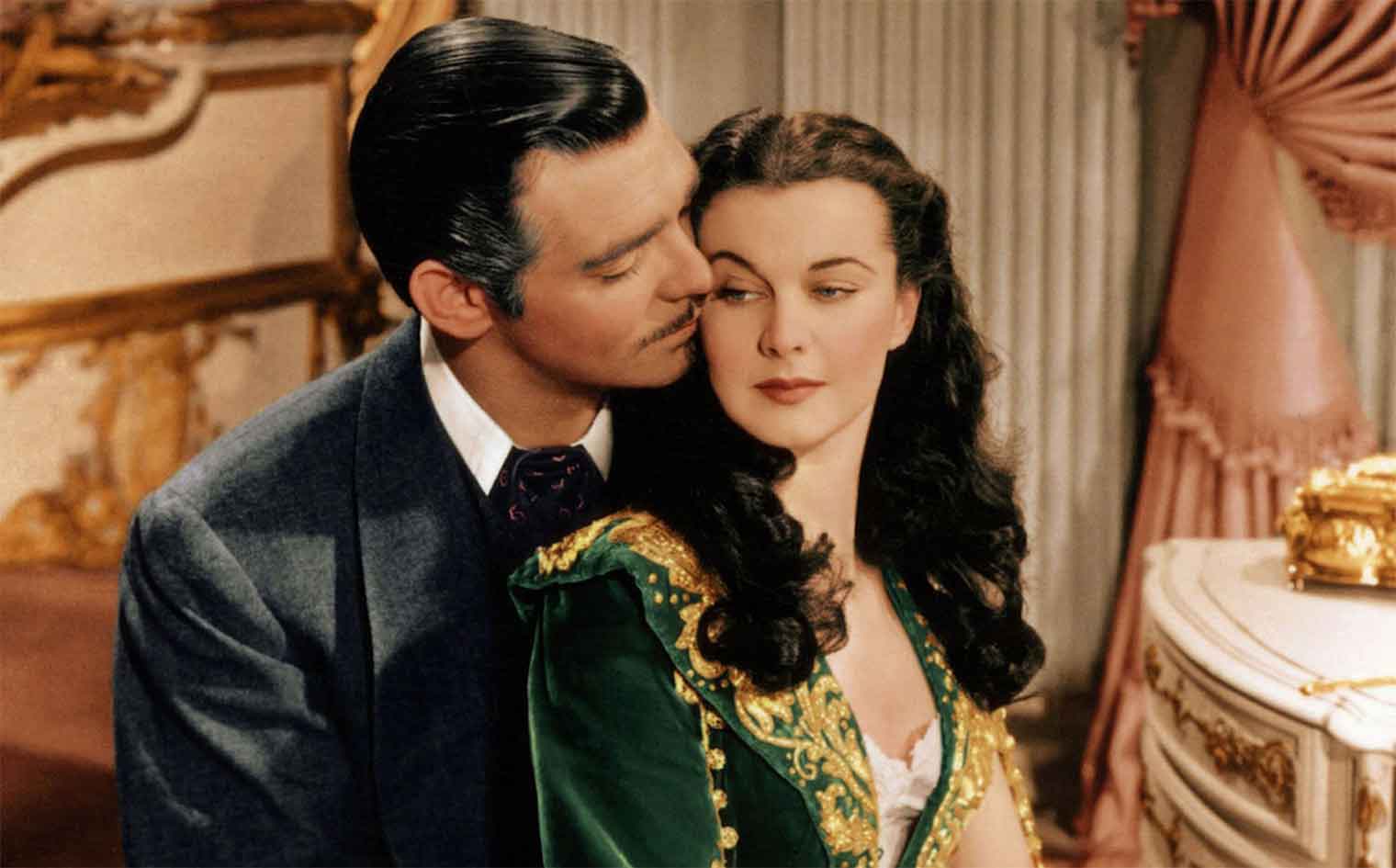 Welcome to The Wisdom Daily’s AFI Film Club! Each month, I will be counting down the Top 10 American Film Institute’s list of Motion Pictures (the 2007 update) and exploring an American ideology/ theme in a recap. Why AFI? Why here? Why Now? Why Me? Click here for a brief rant on my connection to the catalog (insert inappropriate “the list is life” joke here). Enjoy the post and comment (about the film please- I already know that I’m terrible at the kazoo).   Here is AFI’s #6, Gone With The Wind:

The only constant is change and taxes. It’s a cliche that rolls off the tongue, but we spend a lifetime trying to defy it. After all, Americana preaches of tax brackets that fluctuate, and consumerism that pipelines to the fountain of youth. We use the troupes of family tradition, societal norms, and religious text to chisel our hopes and comforts into reality.

Then one day, there is a knock at the door when nobody was expected to arrive. Or one day somebody walks out the door, or the door doesn’t exist anymore. We are left alone and vulnerable, without a floor plan for this doozy. As many a therapist would muse, these moments are good for reinvention, to pick ourselves up and reassess. But if we are capable of doing that, we are just reinstating the same lie, reaffirming our need to manufacture our happy endings. The knock will come again, and the cycle plummets forward.

Okay, okay, I hear you. I am not trying to brew up sympathy for a protagonist whose nostalgic daydreams include enslaved people brushing her hair and bringing her punch.

Gone With The Wind seems blissfully unaware of all the ways that it is problematic in its portrayal of race, gender, sexuality, and American history. Its cornerstone of the quintessential American love story is also nothing to celebrate. Plus, Rhett Butler and Scarlett O’Hara are just another case for our parasitic need to watch rich people behave poorly, something it shares with a lower brow of culture, The Real Housewives franchise.

Yet, like some people’s relationship to The Real Housewives, I’m reluctantly drawn to the film. Maybe it’s because I don’t see the film as sincere (more on that later), or maybe it’s my intoxication with Vivien Leigh’s IDGAF attitude, or just because I like a good period piece. No matter the reason, Gone With The Wind, at its core, is about the struggle people face to maintain their lifestyles against the tides of change. It’s about one person’s delusional efforts to return to the world she had in her youth. While she ultimately fails, she puts up a hell of a fight.

Therefore, with mixed feelings and foggy comprehension, I present #6 on the AFI list, Gone With The Wind.

Young Scarlett is a Georgian debutante, born to the wealthy Irish plantation owner of Tara. She is known for capturing the hearts of many an admirer, but only has the serious feels for Ashley Wilkes. There is just one glitch to her plan; Ashley is happily engaged to his sugary-sweet cousin, Melanie Hamilton. But that doesn’t seem to deter Scarlett, as she attends a socialite party to professes her love, just to be met with Ashley’s rejection. She’s humiliated, especially when she discovers that an eavesdropping Rhett Butler heard all her weeping. Butler is the ultimate bad boy, and takes an immediate (dare I say, inappropriate) liking to Scarlett, who is pissed to find a gentleman who’s not gentle towards her.

Oh yeah, all this happens on the brink of the Civil War, which is a REAL bummer to Scarlett’s scheming.

Don’t worry friends, she bounces back, marrying Melanie’s brother, just so that she can stay close to the Wilkes family. But the War cannot stay out of Scarlett’s consciousness for long, and her husband dies at battle.

“I’m too young to be a widow!” Scarlett laments, and she is suddenly swirled into a life of the War-torn South, losing her wealth, parents, another husband, and much of (if she had ever possessed any), her moral compass. Rhett starts to look more and more dapper, making a killing in the war, and shamelessly vying for the attention of Scarlett.  She reluctantly marries him, but her love for Ashley continues.

This really bothers Rhett, with the only saving grace being their child, Bonnie Blue, the light of Rhett’s life. Bonnie dies, and suddenly the Butlers are left with all their money and a big house. Melanie gets sick and dies too, giving Scarlett the epiphany that she is over Ashley and was really in love with Rhett the whole time. But it’s too late, Rhett doesn’t want to hear it, and he leaves her. She has another epiphany (there are many at the end of the film) that she must return back and build up Tara, after all tomorrow is another day.

As I mentioned, this film is often criticized for its galvanizing of the Antebellum South and glorifying slavery. Indeed, its intentions are seemingly clear in its first scene, when the credits about gallantry and Dixie roll over the silhouettes of enslaved young boys tending to the field. I wonder if I’m giving the film too much credit in thinking that the whole picture is to be taken ironically. If this were truly a movie about how wonderful the Antebellum South is, wouldn’t they have done a better marketing campaign?

This may be the most salacious film on the AFI list. The main male protagonist is a “scoundrel”, and the woman is devious and “promiscuous.” Rhett has the reputation of sleeping with prostitutes and deflowering naive debutantes. Scarlett is named after, and defined by, her intense passion; she is fully aware of her sensuality, using it to get what she wants. She will say sexually explicit things to her lovers, and is totally fine having an adulterous relationship with Ashley. This is why Rhett sees them as perfect together, but he then grows to resent that aspect of her. Or the fact that her passion is not directed at him, and he becomes terribly mad and abusive.

Even Ashley, the Confederate hero, is less than admirable in his lust for Scarlett O’Hara and conducting, at the very least, an emotional affair with some kisses, and at the peak, full on sexy time. The only one who seems to be a poster child for Dixie is Olivia De Havilland’s Melanie, who ultimately doesn’t survive the film. She doesn’t die because of the revolution or the war, but because of the most natural cause: illness. It’s as if she is no longer sustainable in this new world.

Melanie is also not the hero of the film, and Scarlett sees her sweetness and belle nature as annoying and overly martyred. The woman we do root for, Scarlett, is immoral, dishonest, spoiled, and the face of this era. This is the story that the film is telling, it’s mocking the culture that a Confederate would cry over.

Still, this unconventional interpretation cannot deny the unapologetic racism of the film. Gone with the Wind is famous for Hattie McDaniel’s historical Oscar win, as the first Black performer to win ever. Her role in the movie is to play Mammy, the enslaved house worker who always provided guidance to Scarlett. She also is somebody who is not just content with her role, but sees an inherent value in it, keeping her position of servitude after the Emancipation. Thus, the film uses her as the ideal black person, dutiful and nonthreatening, both politically and sexually. She is a token for the film to pretend that it is showing a non-racially charged narrative (the NAACP protested the hell out of The Birth of The Nation, O’Selznick didn’t want the same publicity), but it asserted the same ugly hatred.

Another toxicity in the film is the overbearing masculinity and sexual violence perpetrated by a Mr. Rhett Butler. Butler is his man-manliness; his nature of taking whatever he pleases, famously telling Scarlett “you need kissing, badly. That’s what’s wrong with you. You should be kissed and often, and by someone who knows how.” It’s a violent attack taking down Scarlett, and yet also displaying his sex appeal, as a wealthy rebel who does what he pleases, but for some reason has more virtue than Scarlett because he decides last minute to fight with the Confederacy.

Rhett is the original Christian Grey and James Bond, and the sex symbol that makes women’s panties drop. But Rhett actually rapes Scarlett. In a drunken state, he returns home and veritably tears Scarlett apart.When she slithers her last insult, he grabs her as she screams, and takes her upstairs to a fade out. It’s very disturbing, and I sat up in my chair while trying to think how this got past the censors. But don’t worry all, Scarlett seems “cool with it” in the morning, like the aggressive “kissing” was just what the doctor ordered. Rhett gives a half-assed apology and it’s never mentioned again.

The film shows this act as romantic, that Rhett’s raw sexuality is enough to straighten out O’Hara. It twistedly reads better than if Rhett took out his belt and whipped her, that would just seem cruel; his sexual violence is supposed to be presented as appealing.

What seems to be the only saving grace of of the film, something that could still earn it its title on this list, is the use of land as being an eternal truth. In one of the earliest scenes, Mr. O’Hara tells Scarlett that land is the only thing that lasts, not people, not love. Land. Scarlett looks to define what land means the entire film. First, she thinks it means money, so she swears never to starve again. She also thinks it means reputation and importance, so she finally resolves to marry Rhett and have all the luxuries of any new southern women. But, at the end she decides that maybe it just means land. She loses everythin: her daughter and her husband, her best friend and her reputation. Her love is completely rejected, but she’s not disheartened for long. She knows that she has Tara.

I’m not convinced that Tara can answer all of Scarlett’s problems. I don’t think the film has won me over in that regard. If anything, it’s a tomb of a world that doesn’t exist. That last scene of unabashed hope is almost manic, in that she doesn’t realize that the world she loved is gone forever. She cannot rebuild it again, she cannot undo the war, or her child’s death. But I suppose the optimism is that her life is done, but she’s not.

This, in itself, is supposed to be inspiring, the tale of the little engine that could. However, this film makes me wonder when there are times to let things go. The O’Haras only saw a quarter of the picture; they saw the trees for the forest, Tara for the rest of the world. They weren’t particularly invested in a Confederate state, or slavery, or emancipation, they just wanted their life to remain the same. Scarlett carries her family’s burden, and is also unable to adjust and live in a freer United States. Tomorrow is another day, but is it actually, if you’re pursuing yesterday?

Thanks for reading! Tune in for next month’s recap of AFI’s #5 spot, Singin’ In The Rain.